One of the passing revelations of the Callithumpian Consort’s concert in Jordan Hall on Saturday, January 26, was that exactly where along the absolute/programmatic continuum a piece is situated can, in fact, make or break the piece. 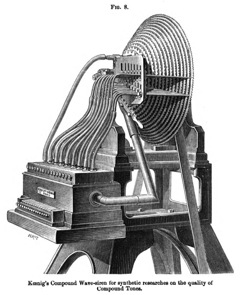 Music which does not paint is nothing but noise.

True absolute music, however, stands precisely in opposition to form. It has the God-given attribute of floating on air and being free of all material conditions.

They’re both wrong, of course. Even putting aside the new musicology staple that all music is programmatic in that it portrays the societal and political hierarchy out of which it emerges, there’s the whole complication of sound, which is both noise and part of the material world. Then again, we’re largely past the whole absolute/programmatic debate that so consumed the classical music world of a century ago. We can bat around the terms, but we don’t use them as critical or even moral cudgels anymore.

But that doesn’t mean the terms are null and void. One of the passing revelations of the Callithumpian Consort‘s concert in Jordan Hall on Saturday, January 26, was that exactly where along the absolute/programmatic continuum a piece is situated can, in fact, make or break the piece. It was two pieces on the concert in particular; and they were similar in certain ways: both deliberately limited in their sound world, both formally simple, both situated somewhere beyond the usual musical discourse of melody and accompaniment, tension and release. And yet I thought one piece marvelous, while the other, for me anyway, didn’t work at all. That very probably is as much about me as a listener as it is about the pieces themselves. But it all had to do with sound: it turns out that, in music that might plausibly be loosely gathered under the umbrella of post-serial experimentalism, music that deliberately wanders the no man’s land between musical sound and noise, the relationship between programmatic intent and sonic (and aesthetic) effect is actually pretty tricky.

The sound of tress/burl, a sextet by Marek Poliks, is, basically, harsh. A string trio (violinist Gabriela Diaz, violist Ethan Wood, and cellist Benjamin Schwartz) lets loose with bursts of forcefully edgy sounds: grinding double- and triple-stops, high whines, all heavily bowed near the bridge. They go on for a while—the stanzas never quite the same, but made up of the same elements—except for a sudden grand pause in the middle of their course. The entire thing (grand pause included) is then recapitulated, but translated into a different trio: piccolo (Jesse Rozinski), contrabass clarinet (Alexis Lanz), and piano (Elaine Rombola).
This was the second time I had heard the piece. At last summer’s SICPP Iditarod, tress/burl had seemed to me both intriguingly obsessive and, perhaps, too long—a contradictory impression, the more I think about it. In the context of this concert, though, even the intrigue was absent. I often enjoy purposefully harsh sounds, but it was almost as if the sounds weren’t harsh enough, or maybe not interesting enough in their harshness: I didn’t feel any invitation to consider what it is that makes a sound harsh or extreme, or any sense that these were even to be considered as sounds, in time, in a physical space.
Poliks writes this:

tress/burl was conceived negatively (anti-god, anti-sexism, anti-populism, anti-modern), but it ossified into something constructive (the paranoia and weakness of normative masculinity, aimlessly romanticizing itself in the face of its own obsolescence).

That’s a mouthful, and more than a little bit of jargon, but I respect the effort. There are a lot of pieces—including a lot of my favorites—that might be said to encompass some sense of romanticizing an obsolescent masculinity. One could plausibly argue that Ravel’s La Valse has something of that, or certain of Shostakovich’s more nominally propaganda-driven symphonies. One could argue that Richard Wagner was never not writing about the romanticization of an obsolescent masculinity.
But the program here was a barrier. Why? It comes back to the sound—an idea crystallized by another piece on the program.

Alvin Lucier wrote Braid for the Callithumpian Consort in 2012. The process is in the foreground: a string quartet (violinists Diamanda La Berge Dramm and Ryan Shannon, violist Danielle Rebecca Wiebe, and cellist Hsaio-Hsuan Sharen Chang) spend the entire piece winding through overlapping slow glissandi—the “braid” of the title. Against it, flute, clarinet, and English horn (Rosinski and Lanz joined by Elizabeth England) play sustained chords, designed to dovetail with the glissandi and then produce beating effects as the strings slide away.

Braid is one of the most ingeniously perfect pieces I’ve heard in a while. It strikes an exact balance between consistency and variety: the strings are constantly in motion, the winds never play the same harmony twice, but the meshing of the two always comes back to those same beating effects. The sound is completely mutable; the intent is completely uniform.

But why did Braid work so well for me, when tress/burl didn’t? In a way, they’re similarly extreme, hermetic, even obstinate. But the pieces fall on crucially distinct points on the absolute/programmatic continuum. Braid, for all its abstract quality, has a program, too, but it’s a program about sound, about illustrating something about the nature of physical sound in a musical context. Doesn’t all music do this though? Well, no—a lot of music takes the nature of physical sound for granted, or at least allows the listener to take it for granted, because the intent is something lurking a few interpretive layers removed from the sound itself: something about the theoretical grammar, something about the drama or theatricality of performance, or (the most traditional programmatic intent) something literary or otherwise extra-musical. This is why the experimental tradition that Lucier—and Poliks—are working in can be considered something distinct.

It would be a cliché to say that Lucier loves sound, and communicates that in his music. I realized that what’s really going on is this: the program/agenda/intent (choose your favorite term) behind Braid is one that reinforces compositional decisions that make what Lucier appreciates about the sounds what the listener appreciates as well—whereas the program behind tress/burl reinforces decisions that work against that. In fact, everything I didn’t like about tress/burl—the lack of sonic variety, the distancing nature of the sound itself, the didactic lack of formal surprise—could be justified as part of the program, an illustration of the brutalization of that romanticized masculinity. (Though I would consider that an incomplete illustration: if you don’t acknowledge the seductive nature of such romanticizations, you fail to completely understand them.) If a piece’s program is actually making the piece less effective as a sonic object, does that invalidate the program? Not necessarily. But when it’s being applied to a style where the nature of the sound is so central to the effect of the piece, it certainly doesn’t help.

The rest of the concert dealt with such concerns in a more glancing, implicit way. Edmund Caballero’s What is time, please? Convergences III, a world premiere, started off in a conceptually limited way: pianist Yukiko Takagi reiterating a fundamental pitch in all octaves and articulations while Caballero overlaid the notes with metallically reverberant electronic processing. After a few minutes, however, the piano part suddenly lets in handfuls of glassy, higher overtones, and the piece picks up significant steam, eventually turning into a computer-amplified evocation of the not inconsiderable glee of holding the sustain pedal down and keeping as many of the piano’s strings in play as possible: almost drowning in the instrument.

The finale was a classic, John Cage’s 1950 String Quartet in Four Parts, given a dazzlingly contemplative reading by Diaz, Wood, Schwartz, and violist Karina Fox. Here, the program (the four seasons as interpreted in Indian philosophy) and the process (mostly tonal harmonies rendered non-functional through random ordering) don’t so much mesh as provide a source and a medium for replication, a meditation on sounds that functions as a kind of stand-in for a meditation on nature. The opener was, on the surface, a complete contrast: Earle Brown’s 1965 String Quartet, performed by Diaz, Wodd Schwartz, and violist Mary Ferrillo, a rerun from last week’s Earle Brown Symposium. The form was rationally symmetrical, the sounds very much those of mid-century atonal modernism (though with twists here and there, as when, at the very center of the structure, a dissonant drone slides into the open strings of the instruments). What’s interesting about the Quartet is the way it both borrows something of the technique of film montage but flips it on its head: as the music switches between its textural modules, it’s the edits themselves that become the focus of attention, the point where the shots join taking on more importance than the shots themselves. It was diverting compositional aikido: musical decisions that make the decisions themselves the musical experience.