The Boston Symphony Chamber Players are celebrating their 50th anniversary with five premieres, nearly doubling the group’s commissioned repertoire all at once. The four new pieces on the February 9 concert were deliberately local. 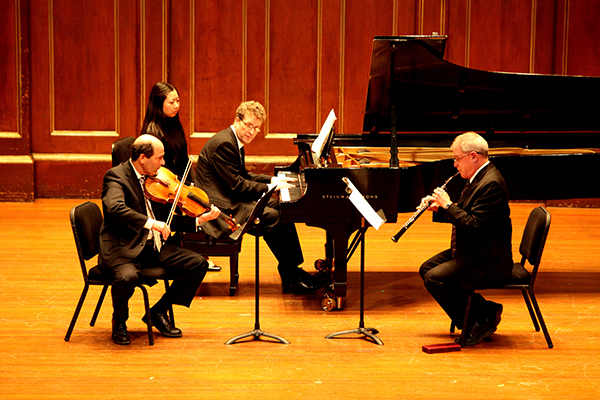 Musical institutions have the amnesiac pleasure of getting themselves birthday presents and still being surprised. On February 9, the Boston Symphony Chamber Players unwrapped the bulk of their 50th-anniversary loot: four commissioned pieces, premiered en masse. (Another commission, Sebastian Currier’s Parallel Worlds, will have its premiere in Arizona before coming to Boston in April.) That nearly doubles the group’s commissioned repertoire all at once; up until this year, only seven other pieces (going by the handy list of repertoire included in Sunday’s program) had been written for them. Then again, I suppose 50 is a plausibly sitcom-ish age for suddenly realizing that you’ve always wanted a lot of new toys.

And, then again, the Chamber Players have always been institutionally unusual. They were founded (as I learned from Jeremy Eichler) as a side effect of Tanglewood’s long flirtation with the automobile; Erich Leinsdorf wanted prelude concerts to give patrons an extra hour to deal with traffic and recruited some of the BSO’s principals to fill the bill. (The members are all still principals, with the exception of cellist Jules Eskin, the lone veteran of that 1964 lineup.) Those commissions are technically BSO commissions, funded by the same pool that keeps the orchestra intermittently current. So the birthday party is both a calendrical observation and a confirmation of the Players’ success—five commissions is a strong commitment from the parent company.
The four new pieces on Sunday’s concert were deliberately local—a couple of old familiar Bostonians (Gunther Schuller and Yehudi Wyner), and a couple of newer connections (Kati Agócs, who teaches at the New England Conservatory, and Hannah Lash, who graduated from Harvard). Agócs’s contribution, Devotion, for horn, harp, and string quintet, hovered in an area somewhere between chamber and orchestral music—one could imagine the strings, at times, blown up to a full symphonic complement. (It did warrant a conductor, outgoing BSO assistant Andris Poga.) The harp (Jessica Zhou) primes the piece with a healthy dose of glitter, a kind of harmonic respiration between diatonic and synthetic scales, under which the strings (Malcolm Lowe, Haldan Martinson, Steven Ansell, Eskin, and Ed Barker) provide a cushion; over it all, the horn (James Sommerville) sweeps and soars, much of it haute-contre high. The middle section was a contrast in almost every way, triggered by Sommerville shifting from the highest part of the horn’s range to the lowest, one snarling pedal tone after another; the viola tiptoes around a melody; the violins and cello stalk soft chords; harp and double-bass keep a hesitant tick-tock. The horn rises back up to the top of its range, an A-section recapitulation, and a wheels-on-the-tarmac unison ending. 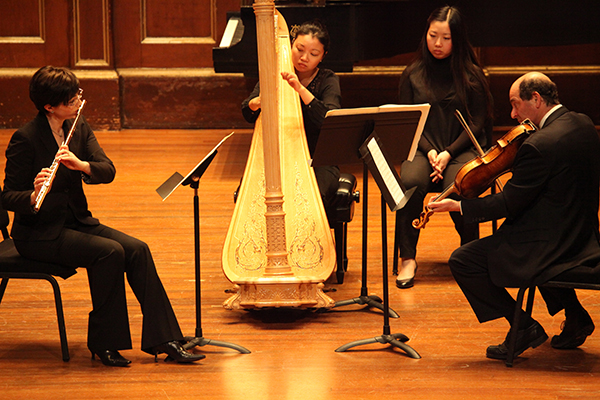 Lash’s Three Shades Without Angles also put Zhou’s harp front and center, flanked by Debussyian flute (Elizabeth Rowe) and viola (Ansell). The harp part started as an exercise in stamina, a moto perpetuo ride the other instruments hopped onto, all mixed meters and crossed accents; the effect was something like the world’s most dreamy and delicate action movie. Then the harp abruptly turned taciturn, offering occasional punctuation for flute and viola recitatives, before laying down arpeggios over which the other two strung a loping, wide-interval melody, hopping from stone to stone across a flowing stream. Like Devotion, Three Shades had that 21st-century sense of moving flats and bright outlines—sharp and deliberate section breaks, a constantly churning counterpoint that, however, keeps stirring through a seemingly single harmonic color (in this case, a higher-overtone, dominant-seventh plus sharp-9 and 11 sort of shimmer). Both pieces had an almost Vermeer-like polish: tightly framed, smoothly varnished vignettes of carefully modulated luminosity.

Where Agócs and Lash used controlled brushwork, Schuller and Wyner opted for more freewheeling lines. Schuller, 88, is a more frail presence than he used to be, but his music—on Sunday, it was Games, a compact divertimento for wind and string quintets—keeps doubling down on musical and intellectual energy. UNESCO has a program where they periodically designate a certain craft or tradition as (and I love this phrase) an Intangible Culture Heritage; if I was in charge of making that list, I would be sorely tempted to include Gunther Schuller’s late-period gonzo stream-of-consciousness style. Every piece of his I’ve heard over the past few years—his Four Vignettes, the Piano Trio No. 3, Dreamscape—is the product of a deep, singular, and probably inimitable reserve of skills and experiences being rummaged through with a compulsively entertaining raconteur’s disdain for restraint or the unities. Games is dense, mutable fun. The opening, a chattering overlap of conflicting tuplets, soon gives way to an entire midway of ideas: a Stravinskian ostinato stuck in its own groove; a burlesque quote of Ravel (the Valses Nobles et Sentimentales, transformed into something gleefully ignoble and unsentimental), whisked away behind some disjointed pointillism; a slashing, slapstick ending swiped from Mozart’s Musical Joke. Along the way, Schuller has a lot of fun with the sheer timbre of dissonance, odd combinations of instruments, and intervals that, on at least a half-dozen occasions, had me half out of my seat, trying to parse what strange alchemy had created such an unexpected sonority. Games was about half the length of any of the other new pieces, but it contained at least twice as much music. (Oboist John Ferrillo, clarinetist William Hudgins, and bassoonist Richard Svoboda joined the crowd; Poga again conducted.) 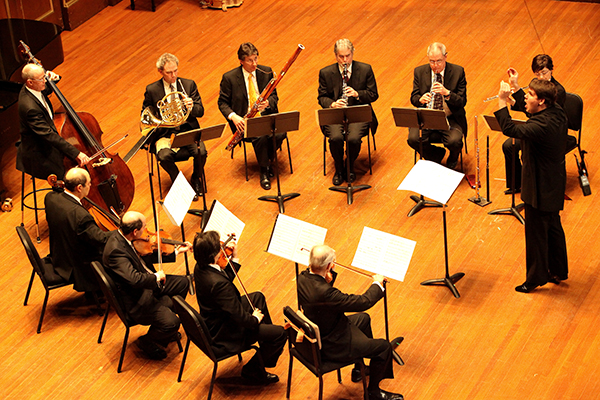 Wyner’s piece was nowhere near as manic as Schuller’s bag of tricks, but it, too, ended up covering a significant amount of ground. Into the Evening Air put a traditional ensemble (a wind quintet) into a traditional mood (nocturnal, in both susurrant and serene varieties), but deviated from the path just enough to keep the ear continually attuned. Both the busy, twittering opening and the languid dissonance it turned into nodded toward other staples of the repertoire (Samuel Barber’s Summer Music came to mind more than once), but only from a distance. In an analogous way, Wyner paid heed to customary quintet allegiances—flute and oboe, horn and bassoon, clarinet as a free agent—but then, in a section of passed-around solos, used some deft play with range to expand and shift those alliances: horn and bassoon going up into their higher notes to let low flute join in, oboe going down to its lowest tones to make common cause with the horn and bassoon, the flute and bassoon suddenly stalking about in wide-spaced octaves, the other three instruments slipping into the gap. Into the Evening Air moves from idea to idea with a kind of diaristic nonchalance. The conversation slows almost to a frozen stasis before Wyner turns one last nifty corner: a soft chord that fades into a single clarinet note, which then dovetails into a quietly questioning call from the flute. 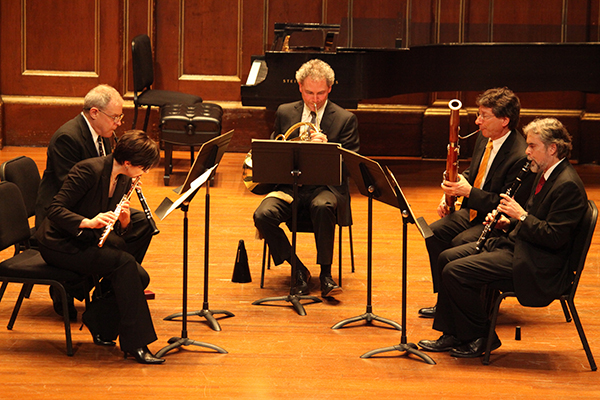 The group surrounded their bounty of novelty with a pair of turn-of-the-last-century works that extended the locavore theme—more New England composers—but also encompassed the program’s contrasts: mood and structure, formal and feisty, male and female. Ansell, Ferrillo and pianist Randall Hodgkinson opened the show with a lush and equable mezzotint reading of Charles Loeffler’s Two Rhapsodies. Hodgkinson was back, joined by Rowe, Martinson, Ansell, and Eskin, for the finale, Amy Beach’s brawny op. 67 Piano Quintet, in a performance that made a pretty good nomination for the Quintet’s admission to the Academy of the Underrated. (The Quintet’s Adagio espressivo movement, certainly, is a stretch of late-Romantic mastery that can take its place alongside anything at all.) Give the Boston Symphony Chamber Players their due as hosts and hostesses: the party favors were as good as the presents.