Edward Cohen died ten years ago, at the age of 61, composing right up until the end—having, it was reported, outfitted his hospital room with an electric piano. In the intervening decade, opportunities to hear the results have been rare, so the February 18 memorial concert presented by MIT and the Radius Ensemble was not only an appropriate commemoration, but at least a small correction as well.

Full disclosure: Edward Cohen once gave me a job. This does not make me particularly special, actually. The number of grad and post-grad composers and pianists who have made rent teaching keyboard harmony in MIT’s room 4-070—a grid of digital pianos, tucked in a corner of the basement of Building 4, down a long hallway of fabrication labs—is not small. When I signed on, several careers ago, Cohen, longtime MIT senior lecturer (and before that, longtime faculty member at Brandeis), was the gatekeeper. 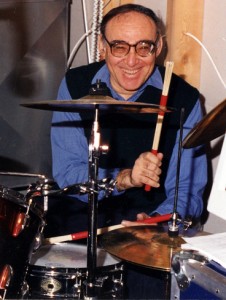 Cohen died ten years ago, at the age of 61, composing right up until the end—having, it was reported, outfitted his hospital room with an electric piano. In the intervening decade, opportunities to hear the results have been rare, so the February 18 memorial concert presented by MIT and the Radius Ensemble was not only an appropriate commemoration, but at least a small correction as well.

There was also a commissioned premiere, MIT alumnus Andrew McPherson’s After the Rains, for mixed sextet (flutist Sarah Brady, clarinetist Rane Moore, and percussionist Aaron Trant joining the trio’s players). The title and the piece are a take-off on Cohen’s own Acid Rain, for percussion ensemble, in which Cohen ventured into minimalist waters in his own idiosyncratic way. After the Rains wasn’t very minimalistic, but rather aimed for long builds and splashes of color. The trajectory had a stronger profile than the melodic material; everything ended up sounding like the introduction for a big theme that never quite materialized.

But it was Cohen’s compositions that provided the program’s impetus and lion’s share: a Suite for solo flute, a Capriccio for solo piano, and one of his major statements, his Quintet for Clarinet and Strings.

Cohen’s music has not traveled much beyond Cambridge. (Only two of his works—Acid Rain and the Clarinet Quintet—are available on recordings; I never heard any of his music until I moved east.) That it is not better known is both a crime and frustratingly understandable. The music, plausibly (but also misleadingly) characterized as academic, is not flashy or easily packaged—even his deep knowledge of jazz tends to be sensed only fleetingly, indirectly. As the euphemism goes, it requires close listening. But that close listening is constantly, generously rewarded.

He was a virtuoso of the varied repeat, rotating short motives into illusions of depth and dimension. The first movement of the Clarinet Quintet revels in such tiny shifts of intervallic demeanor, gently curt phrases that turn unexpected corners. Towards the end of the movement, the clarinet reassembles all the motives into a single, long, angular line, a seeming culmination, But no, it’s merely the end of a long development, and a brief recapitulation of the opening rounds the essay off with disorienting grace. To pull off such Haydnesque misdirection in a fully chromatic context takes real technique; Cohen made it seem easy. (The performance, with Dimmick and Bolkosky joined by clarinetist Eran Egozy, violinist Katherine Winterstein, and violist Noriko Herndon, was a little rough around the edges but captured the music’s sustained, long arc.)

The programmed pieces showed a penchant for non-sequitur endings that nevertheless recast everything that’s come before. (A Poulenc-esque token of his Francophilia, perhaps.) The Flute Suite (played by Brady) has a barbed “Finale” that slowly winds down, only to finish in a whiffling burst of notes, the tape suddenly spinning in furious rewind. The Capriccio (Sarah Bob giving the evening’s most confident and fluid performance) turns suddenly oracular in its last bars, the wit giving way to a serious backbone; something similar happens in the Quintet’s second movement, a scherzo that dissolves into a slow, muted finish, the melancholy lurking behind the joke.

The essence of Cohen’s craft is, I think, staying just one step ahead of the listener. The Suite works a daisy-chain of ideas: an increasingly complex compound melody in the Prelude sets up the monophonic counterpoint of the Fugue; the fugue subject’s two-note, stepwise motive turns into a hangdog glissando in the Pastorale. But as soon as the listener begins to perceive that movement-to-movement process, the music moves away from it to a counterpoint of mood; the “Song” turns out to be an ersatz fife tune that dissolves into dissonant qualifiers, the “Finale” sums everything up with oblique contrast. The closing Andante of the Clarinet Quintet works this vein, too, seeming to set up a sharp dialogue between contrasting materials—consonant-but-disjunct vs. dissonant-but-smooth—but again, as soon as the rules of the game become perceptible, the game changes, the boundaries begin to blur, the harmonies turn rich and ambiguous.

It would be a pity if such music only turned up on periodic memorials like this one. But composers, through their work, get to leave their own monuments, and Cohen’s music is a discriminating bequest—smart, dry of wit, precise about even modest moods, not afraid to be oblique and understated, but, then again, not afraid to be suddenly exquisite, either. Nice work if you can get it, really.

On February 28, Alvin Curran gave the annual Louis C. Elson lecture at Harvard University, a talk called “The New Common Practice—A Life in Unpopular Music.” Curran is a composer of compulsive eclecticism, and his talk was largely a celebration of that; “The New Common Practice,” an idea he has been playing with since 1994 (and which Benjamin Piekut explored on this site back in 2004). If the old common practice, the system of tonality and counterpoint and form bequeathed by the last millennium’s European tradition, represents “the entrenched models of the past,” as Curran put it, his ideal new common practice is an exuberant anarchism—”no common practice,” the field of musical research expanding to include “walls of noise and… its near-total absence,” the boundaries between high and low “all but wiped out.”

On the one hand, the “growing omnidirectionality” of music Curran sensed back in 1994 has only accelerated, the explosion of digital information and access shrinking distance (both geographical and temporal), flattening hierarchies. (In digital fashion, Curran dropped long lists into his talk like drum breaks, not only the contradictory census of styles and tendencies that opened his original 1994 essay, but also similarly catholic tallies of qualities and composers, like reveling in the streaming results of a broad, general web search.) But there was a kind of cheerful tension between that and Curran’s acknowledgement of his own personal history as a practical source. He opened by recognizing his indirect Harvard connections, from teachers (Elliott Carter, Harvard ’32) and partners-in-crime (Frederic Rzewski, Harvard ’58), to visits—Curran told of playing at Harvard Stadium as part of the Brown University Band then having the Harvard Band impress him as a horde of “spectral Vikings.”

Curran opened with a curio, a recording of him playing trombone in the 1958 edition of The Brunotes, a Brown dixieland group. “Essentially, you have everything right there,” he joked, “I’ve been making that sort of music ever since.” Or maybe he wasn’t joking: he followed with an excerpt from Erat Verbum John, an electronic fantasy on a recording of John Cage laughing (as brilliant a concept as I’ve run into lately), and, in the context, it did sound a lot like Dixieland: a snippet of laugh looped into a little trap-set pattern, another snippet sped up to a clarinet-like squeal, another snippet slowed down and sliding around the bass like a trombone.

The longest excerpt Curran played was a series of video clips from his 2006 Oh Brass on the Grass Alas, a grand, outdoor fantasia for multiple marching bands, moving all the way from aleatoric, process-driven clusters and wandering field formations to a final, Ivesian use of Bach’s “Es ist genug” chorale—as giddy an example imaginable of the “theme park” aspect Curran posits as part of the New Common Practice. It hearkened back to Curran’s own college day memories; it also emphasized the political thinking behind much of his music. At its premiere, at the Donaueschinger Musiktage, it was played by a host of local, amateur bands: not only breaching the walls of the professional festival, but bringing together groups that “normally only play against each other” in competitions, Curran pointed out. “It was a social and political success.”

In every piece Curran played, one could sense a discipline, an order that kept the seeming chaos from turning truly and boringly chaotic. It’s the relationship between form and rhetoric; no matter the sound-world—minimalist or maximalist, melodic or noisy, instrumentally compact or musique-concrète anything-goes—you always know at any given moment whether the music is on its way somewhere or already arrived. Where does that skill come from? Can you develop it without a grounding in some sort of common practice? The question provocatively percolated beneath the manifesto. At one point, Curran spoke of “the endless remix of all time and space—the fusion of memory and amnesia.” Do you keep all of musical history in play, or let the contradictory forces cancel each other, and everything, out? Curran would probably say “both” and then generate an idea for a piece from it.

It’s captivating to surrender to Curran’s creativity, his enthusiasm—and frankly, his ear for sheer beauty. But I also still had Ed Cohen’s exacting consistency in my ear. Curran’s music was, on the surface, the opposite of Cohen’s, but the effectiveness of both composers’ works springs from their relationship to the common practice, to rules, to limitations: Cohen was exhilarated by the challenge of staying within boundaries, Curran is exhilarated by tossing them aside. 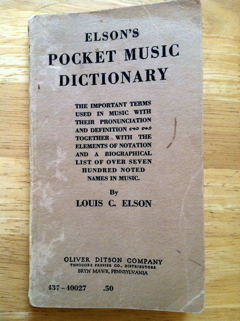 There was one final irony, left unspoken. Louis C. Elson, the lecture’s namesake, was a codifier of the common practice, the author of Elson’s Pocket Music Dictionary. (“For practical and immediate use in the class-room,” Elson wrote of his effort, “I believe that the little volume will be found sufficient to the needs of the teacher.”) Elson also had a regular column in The Etude, answering readers’ questions about music; the first of the columns (from the May 1910 issue) had a question on that eternal bane of common-practice voice-leading students—parallel fifths. “[G]reat composers use them when desired,” Elson allowed. “Puccini has a whole series of them in the beginning of the third act of ‘La Boheme.’ But the young composer will do well to avoid them, at least until he has won as much fame as Puccini.”