Songs written for the stage are no longer the currency of mainstream musical engagement, yet “song” has become the default term for just about any piece of music under the sun. Is the word still meaningful to creators of new musical theater? 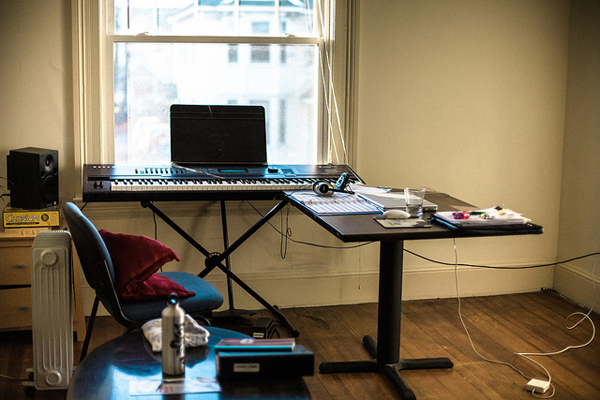 Photo by Luke Redmond (This image is in the Creative Commons and is available on Flickr.)

At my day job in music publishing, I spend a lot of time on the phone with the staff at film companies, television stations, and musical organizations who need to know if we license this or that song. Over the course of our conversations, I often discover that what they are calling a song is actually a whole song cycle, a movement from a symphony, half a string quartet, or even an entire opera. Compositions entered into databases have “song codes” regardless of their content. iTunes’s various “upgrades” have managed to jumble every excerpt of every opera, oratorio, musical, symphony, concerto, or other multi-track work in my collection; its overly general classification of “songs” has transformed my once-pleasant listening experience into a chore as I hunt for newly mislabeled tracks in albums needlessly broken into multiple iterations. Since rock ‘n’ roll zoomed to the top of the charts and the sun set on the Golden Age of musical theater, songs written for the stage have not been the currency of mainstream musical engagement. Yet “song” has become the default term for just about any piece of music under the sun. Is the word still meaningful to creators of new musical theater? How does it inform our writing as we formulate the structure and content of our larger pieces? How do we think about songs within and outside their original context? Are there additional considerations that are not even artistic in nature?

In most operas, there are clear distinctions between recitative and aria. The recitative usually contains a fair amount of exposition, and the aria that follows is a reflection on or reaction to that information. Often this requires only a few lines of text and is also a chance to feature some vocal pyrotechnics. Song form in musical theater is a descendant of, among many things, the operatic aria. Though contemporary musicals sometimes employ recitative (sung over chords as in the old style, or spoken in rhythm over an ostinato), in the usual book musical format the dialogue functions as recitative would in an opera, so less recitative is necessary. As musicals evolved over the 20th century, songs became more heavily integrated into the story and carried more responsibility to move it forward. It was no longer satisfactory to step out of the action just to say “I love you” in 32 clever, internally rhymed measures. Music also appears in “sequences,” longer sung scenes or portions of scenes which may involve many characters (example: “Hello Twelve, Hello Thirteen” from A Chorus Line). Sequences were happening in the days of Gilbert and Sullivan and continue into the work of Michael John LaChiusa and his peers. We generally don’t include those under the “song” umbrella since they can take vastly different shapes in their respective shows. Since songs—and musical moments overall—comprise more of the true core of their parent sources now, it can be more difficult to extract them from their natural habitat and fully understand them. Sure, someone can technically sing “Epiphany” from Sweeney Todd on its own, but if we’ve seen the hour or so of backstory unfold first, it is much easier to appreciate.

One of my favorite musicals, William Finn’s revelatory In Trousers, breaks most of the rules. It is almost completely sung through. The score is divided into 29 numbers, but each segues immediately into the next. Many begin with brief intros without really paving the way for anything the characters will express next. Few adhere to an A-A-B-A, verse-chorus, or other standard song form. Some are abstract, bordering on stream of consciousness. Non sequiturs and nonsense syllables pop out of the lyrics. Many end abruptly with no resolution or catharsis. One song, “The Rape of Miss Goldberg,” is divided into eight scenes, each of which is announced. Since the main character, Marvin, jumps back and forth from adult life to adolescence on a very messy and fraught path to self-discovery that forever changes his relationships to everyone in his life, it makes sense that Finn subverts the usual hallmarks of musical theater songwriting. The parts add up to a greater whole, though he may present it more elliptically than most. Finn’s author note in the script says, “[A] lot of the material was about my learning to write the kind of show songs I want to write.” Should he still call them songs? He could plausibly call them something else, but if we want musical theater to continue to grow as an art form, then our perception of what constitutes a musical theater song needs to adapt accordingly.

In graduate school, our department head told our class that a well-written musical theater song serves as a writing team’s calling card. It represents the authors’ collective personality, talent, and worldview all in a neat little three-minute package. It whets listeners’ appetites for more songs and, if you’re lucky, for your entire musical; therefore, there’s potentially an awful lot riding on every single song one presents in public. (No pressure, though!) Out in the real world, I have indeed found it productive to prepare individual songs for concerts. Ideally it opens up dialogue for future collaborations with new artists and yields subsequent performances. But carrying the professorial advice one step further, a song within a larger theatrical work is no longer just a segment of something greater; it must also be its own biosphere ready to be picked up for Famous Broadway Singer X’s next album or concert tour. This runs counter to the idea that a successfully functioning theater song is inextricably woven into its original context. Yet in our current economically dire and overly saturated climate, if we want our voices to be heard and our careers to flourish, our songs must do everything at once. In my own work, I’ve noticed that standalone songs have an unfortunate tendency to pull my attention away from finishing full-length pieces. It is much easier to focus on placing songs in a bunch of concerts than it is to endure the years-long agony of seeing a musical or opera to completion. One way of getting people acquainted with my work is obviously more expedient than the other, but it may be detrimental in the long term as the bigger unfinished projects continue to loom. Say I do pique people’s interest with the songs—what more will I have to offer after that?

I have no background in pop songwriting, but I once had an opportunity to submit a song to Celine Dion’s A&R team, so I tried it. During a public review of the finalists’ (of which I was not one) work, a panelist advised, “No one’s looking for track #9 for the album anymore. Every song has to be track #1.” I worry that this model applies to musical theater songs now, too. Is the pendulum swinging back the other way? Are we returning to a time when our songs must function as pop songs in order to survive, even though the genre has come so very far since the days when musical theater composers dominated the airwaves? Only a handful of songs from In Trousers work well in isolation and none of them would be #1s, but musical theater is much better off for their existence. For all the day-to-day aggravation it entails, I still hope we can continue to confuse iTunes and not placate it.