If there is any way to distill the wide-ranging artistry of Matana Roberts, it might be to focus on the ways in which she eludes definitions. The Chicago-raised composer, improviser, and alto saxophonist offers a friendly yet confidant smile as she explains, “Basically, I don’t like being told what to do, or who I am, or what I am by other people. I prefer to make those statements myself.”

If there is any way to distill the wide-ranging artistry of Matana Roberts, it might be to focus on the ways in which she eludes definitions. Where the weight of other people’s expectations—of her instrument, her genre, even her race and her gender—might have fenced her in, she has instead pushed off these bounding walls into new areas of exploration, both sonic and narrative. The Chicago-raised composer, improviser, and alto saxophonist offers a friendly yet confidant smile as she explains, “Basically, I don’t like being told what to do, or who I am, or what I am by other people. I prefer to make those statements myself.”

For Roberts, that kind of self-definition seems to flow hand-in-hand with a certain creative restlessness. While the influence of jazz in her music is apparent, she has expanded her creative palette to encompass a broader world of improvisation, experimentalism, and theatrical storytelling. This drive is perhaps most clearly showcased under the heading of her work Coin Coin, which she began developing in 2006. Divided into 12 “chapters,” the project includes multiple ensemble configurations, graphic notation, and explorations both compositional and historical. It is a work that is intensely personal and yet strikingly universal, incorporating her general interests in ritual, spirits, and genealogy alongside a more exacting trace of her own bloodlines and the stories of her ancestors. Like much family history, the path is circuitous and the narrative open to interpretation. Whether she and her flexible band are whispering intimate secrets into the ears in the audience, cajoling them into joining in, or screaming at their side, however, the result is a piece of transfixing emotional power.

In her artist statement, Roberts includes a line which has inspired the title of this profile, “Through my life’s work, I stand creatively in defiance.” In the course of our talk, she celebrated what sets her apart and the vital role art can play when taken outside of its usual hallways. And while certainly there are outside forces that can try to hamper her artistry, she has also come to realize that sometimes the most forbidding barriers are the ones that can build up inside. “I have all these things that I want to try creatively,” she acknowledged, “and for a long time, I didn’t understand that there was nothing standing in my way.”


MS: Considering the financial challenges that might hamper work of this scope, can you tell me more about how the development and composition process for these pieces has worked?
MR: Before I started the project, it was very rare that I could sit down and write a song. The one thing that I’ve always loved about jazz is melody and that will always be a hallmark of all of my work. But I also grew up during some of the best eras of hip hop and also was really heavily influenced by riot grrrl and punk, and so I would try and write and I could never finish a song. Every now and then a song would come out from beginning to end, but usually they would come in snippets, and I’d have just these pieces. For a while I felt like a real failure. Then I started weaving the snippets together and understanding that maybe they are all part of the same thing or, if they aren’t, I can make them part of the same thing. I also became more and more interested in graphic notation and the ways in which musicians see sound.
So I just started weaving things together in that way. I remember the first score I put together. I thought I was going to get laughed out of New York City. But we did it and it was like magic. I was like, wow, this kind of composition is possible if you make sure you do it from your heart. Every piece of graphic notation that you have on a piece of paper, you should be able to really break down and really minutely explain, so that it’s honest. When I went in that direction, it all started to make sense.
MS: What made you question that initially? You mentioned that you thought you were going to be laughed out of New York City.
MR: I went to jazz schools and had some really negative experiences. Those places sometimes will make you feel like anything that you have to offer is not good enough—not just jazz schools, any institution can do that to you. So I really let that undermine me. I had a professor in college that told me the only way that I was ever going to get a gig was to marry a musician. And at the time, I believed him because he was the professional and I was the student. So, I still had all these little scars from that. It almost seemed too playful and too imaginary for anyone else to understand. I found out later that that was not true, but I needed to go through that process.
MS: Can you describe the graphic score/notation system that you are using in the work?
MR: To be honest with you, I’m not sure I can really break it down because it’s work that I’m still trying to develop. Things have changed. That has been the interesting thing about it, and what has slowed it down somewhat, too. I thought I would be done with all 12 chapters by 2011. Ha! No.
To start, I had a really deep interest in sacred geometry and symbolism. I was using some Native American and African symbolism. Then, looking at these different locales that I’m dealing with—Louisiana, Tennessee, and Mississippi by way of Africa, Ireland, England, France, Scotland—and looking at how these different places throughout their history have dealt with symbolism, and what symbols have remained. Oftentimes, I would pull symbols from that, that I could draw. I think partly this is also because I wish I could draw. So I would look at a shape or scribble and imagine how I could interpret that in sound: what someone could ask of me in terms of how to interpret that and, most importantly, how I could use it to not really create melody but how it could create texture. So that is the direction that I’ve always taken the graphic scoring. Also, people always accuse me of having a really personal sound, or a really personal approach, which is a nice accusation, but I also wanted to figure out a way that I could create but still have the performers’ own personalities come through. The first chapter of Coin Coin I actually put together partly because I wanted to play music with my friends who couldn’t read music—a lot of Canadian folk that I really loved who are amazing improvisers, but weren’t readers. Then sometimes I would do some of this work with people who were amazing readers, but not good improvisers, and there’s a definite difference in that. So, I just wanted to figure out a way to create the scores where I could find these little textures that I was interested in. Now, even with re-renderings of chapters that have already been recorded or that I’m still performing, there are still new textures that I’m looking for that I haven’t heard yet. So I’m trying to push that into the next segment of scores. 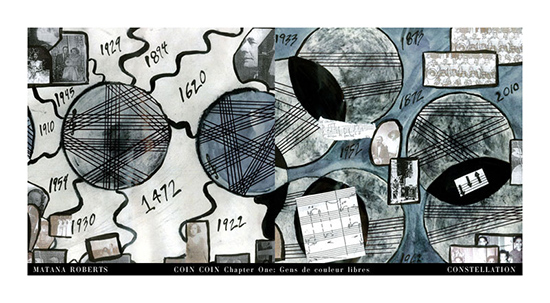 
MS: Is there room left in your head for anything else?
MR: It’s difficult, but I refuse to just focus on Coin Coin. The history that I am dealing with is so heavy sometimes that I actually feel drowned by it. It’s important for me to have some other ways of opening. I have a new New York quartet, and my focus with them is to keep all the graphic notation out of that and just to deal with my love of themes and songs. And I still explore solo saxophone work that is just in the tradition of solo saxophone. No extra anything. I have all these things that I want to try creatively, and for a long time, I didn’t understand that there was nothing standing in my way. You can do anything you want to do.