Mark Adamo's The Gospel of Mary Magdalene
NewMusicBox
Written By

A work six years in development with a libretto written by the composer, The Gospel of Mary Magdalene is an earnestly personal and thoroughly researched re-examination of the role of the main women in Jesus’s life, as well as an attempt to understand Jesus and his disciple Peter as flawed human beings.


The San Francisco Opera’s summer season, which concluded this past weekend, featured the world premiere production of Mark Adamo’s The Gospel of Mary Magdalene. A work six years in development with a libretto written by the composer, The Gospel of Mary Magdalene is an earnestly personal and thoroughly researched re-examination of the role of the main women in Jesus’s life—Mary Magdalene and his mother (who is called Miriam in the opera)—as well as an attempt to understand Jesus and his disciple Peter as flawed human beings.

Adamo’s recasting of the story of Jesus’s life is rooted in the so-called Gnostic Gospels, texts that were discovered in Egypt in 1945. Written in the first couple of centuries of the Christian church, these alternate tellings of Jesus’s history did not become part of the canonical texts that we are most familiar with. Nearly every discussion about the opera I have heard or read has made mention of the 116 clearly sourced footnotes in Adamo’s libretto, and though some have found them surprising or amusing, it cannot be denied that this opera is a serious inquiry on Adamo’s part, an attempt to filter scholarship through the lens of opera and theater. He has said specifically that he is not thumbing his nose at the story as it has traditionally been told; rather, he said in an NPR interview, “I love this tradition. I would not have been able to write as I wrote unless I thought the story would gain rather than lose nobility, credibility, and passion.”

The most non-traditional elements of this telling feature Mary Magdalene’s central role in Jesus’s life as his wife, one who is at his side as he preaches and who is a forceful counterweight to his disciple Peter. Also, rather than being the son of God born from an immaculate conception, Jesus is explicitly described as a bastard child of Miriam, who was a teenage bride impregnated by a man other than Joseph, and who was given the choice to abort but decided against it. It may be that the seriousness with which both Adamo and the San Francisco Opera approached the topic—talk-back discussions were held after each performance with Kayleen Asbo, a cultural historian and mythologist, and multiple ancillary events were held at Grace Cathedral in advance of the premiere—helped to deter any public protest regarding the work. Nonetheless, San Francisco Opera’s General Manger David Gockley, who had also commissioned Adamo’s previous two operas (Little Women and Lysistrata) when he was at Houston Grand Opera, did say that the topic scared away other opera companies, leaving San Francisco Opera as the sole commissioner.

This premiere production of The Gospel of Mary Magdalene luxuriated in exceptional American musical talent, spearheaded by mezzo-soprano Sasha Cooke singing and performing the title role with fervor and clarity throughout. Frequent stage partners Nathan Gunn and William Burden portrayed Yeshua (Jesus, in Hebrew) and Peter, respectively, with Burden delivering a particularly compelling performance during the Passion scene in which his cowardice leads him to deny his relationship with Yeshua. Soprano Maria Kanyova, who portrayed Pat Nixon in last season’s production of Nixon in China (covered in NewMusicBox here), returned to the company for the role of Miriam. Conductor Michael Christie, who, like Sasha Cooke, was making his first appearance with the San Francisco Opera, led the proceedings confidently, balancing the orchestra well with the singers, who had a great deal of text in English to deliver, and allowing Adamo’s varied and evocative orchestration to shine. 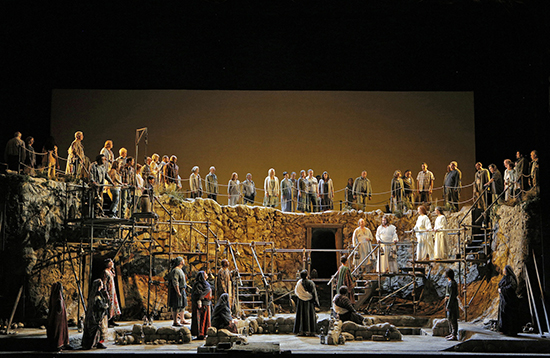 Adamo places Mary and Yeshua’s story within a contemporary framework by opening the opera with five “Seekers” dressed in contemporary clothes who enter the set while the house lights are still up, mirroring the audience members who are entering the house. The mammoth set designed by David Korins, which never moves in the course of the production, evokes an archeological dig site in which the Seekers voice their concern about modern-day religion: namely, that they—or perhaps we, or perhaps specifically Adamo—have been taught that the body is “unholy” and “the very source of sin,” and that this “poisonous” view of the physical and sexual self has caused years of hurt. And yet, the need to find a way to integrate their religion with the rest of their lives remains, and it sets up the rest of the opera as an attempt to “correct” and “complete” the story as it has been told traditionally. For most of the rest of the production, the Seekers remain on stage, often observing and commenting but sometimes interacting, acting as our avatars within the story as it develops.

For such a radical retelling of a canonical work, Adamo’s musical language is notably un-revolutionary; clarity of text delivery is prioritized through lyrical lines and repeated motives that move among various people throughout the opera, musically interweaving the characters’ lives. In the chorus’s frequent appearances throughout the work—the most effective being the crucifixion scene, where they violently deliver a version of the Dies Irae text, in Greek—Adamo often has them sing homophonically or in vocalise, making their pithy commentary clearly understandable. (The most memorable instance of this is when they interject footnotes into the action.)

Adamo has spoken openly of the challenges of his Catholic upbringing, as a gay man whose divorced mother continued to send him to church and Catholic school even after she was denied communion. The Gospel of Mary Magdalene is clearly born from the desire to excavate that personal history through looking at the real people buried under two millennia of mythology. In this process of humanizing these characters, however, the holy and spiritual aspects of these figures are often left by the wayside. For this listener, the missing linchpin in this look at Jesus’s life was divinity: in this portrayal, it was hard to understand why Jesus gained the following and devotion that he did. In the scenes where Yeshua is preaching, he is given a fire and brimstone diatribe and a comic theatrical moment referencing circumcision, but holiness is notably absent. Yeshua invokes God only once in the entire production, when he is on the cross, forsaken. Nearly all other references to God are uttered by the women, and not necessarily in a reverential way. At best, the character of Yeshua seems almost a boorish bro; at worst, he might be perceived as a misogynistic and hypocritical charlatan. Even Miriam and Peter seem to mock Mary Magdalene at first for naively falling for Yeshua’s charismatic preaching. When the gathered crowd passionately declares him the Messiah, it is difficult to see what motivates them to do so. 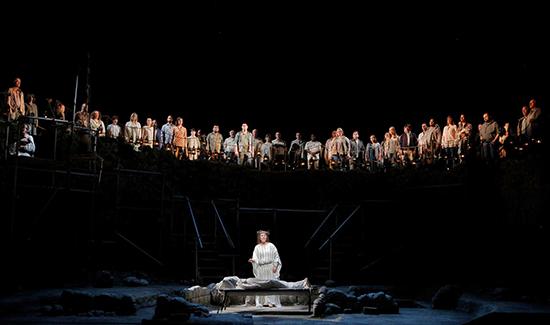 Among the most significant “corrections” that the Seekers allude to in the opera’s prologue is the translation of John 20:17, which occurs in the final scene and which Adamo explains in his penultimate footnote:

Translated into Latin as Noli me tangere, or “Don’t touch me,” this line, over centuries, inspired thousands of paintings of a tearful grasping wench thrust aside by an angel bent on higher things: the very image of the Church’s ancient equation of women with sex and sin. But the original line, in Greek, means, as rendered here, “Do not hold on to me,” or “let me go.”

In the opera’s version of Mary Magdalene visiting the tomb, taken from the Gnostic Gospel of Mary, the crypt is not empty: the corpse is still there, but Yeshua’s ghost appears behind Mary. (The most questionable directorial choice of the production involved Yeshua’s unintentionally amusing ascension into the crypt by means of a hydraulic lift, and subsequent descending into heaven through the stage fog.) Their final duet, launched by Yeshua’s plea to let go of the ones we love, is perhaps the clearest instance of the influence of American musical theater on Adamo’s compositional language. Yeshua urges Mary to “tell them” his and her stories—essentially to spread the Gospel in her terms—a task that Adamo has taken on in this opera.

During the run of The Gospel of Mary Magdalene, we saw the Supreme Court rulings on California’s Proposition 8 and DOMA, as well as Wendy Davis’s epic filibuster in Texas (and Governor Rick Perry’s subsequent comments about her as a teenage mother at a Right to Life conference). Directly across the street from the San Francisco Opera house is the City Hall where same-sex couples were issued marriage licenses during a brief window in 2004, and the plaza where San Francisco’s annual gay pride celebration was taking place. Within this context, Adamo’s opera, which aims to reconcile sexuality with a Christian life, and which argues for a woman’s right to possess a physical identity without abandoning spirituality, could not have found a more appropriate home than the San Francisco Opera. 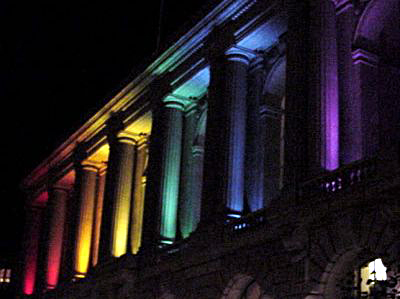