Julian Wachner: Transcending the Sacred and the Profane

Composer, conductor, and Trinity Church music director Julian Wachner believes that all music is meant to induce a transformative experience upon the listener and believes that changing listeners’ lives through music is a “moral responsibility of the compositional craft and the performative craft as well.”

Video presentation and photography by Molly Sheridan
As the director of music and the arts for Trinity Wall Street, Julian Wachner wears many hats. The 45-year-old composer, conductor, organist, and pianist oversees the music-making at this Lower Manhattan Episcopal house of worship, navigating both what the extremely versatile Trinity Wall Street Choir sings during religious services and a broad range of secular concerts held both in the main church and in St. Paul’s Chapel, which survived the September 11, 2001 attacks on the World Trade Center across the street. But while religion is central to his musical as well as his personal life (he is a practicing Episcopalian and his wife, Rev. Emily Wachner, serves as a priest at Trinity), he also is a regular conductor for the PROTOTYPE Festival, earlier this month conducting Ellen Reid’s Winter’s Child. (His own opera Evangeline Revisited was showcased on the New York City Opera’s VOX series in 2010.) And in February he will conduct Charles Ives’s 4th Symphony and a rarely performed Alberto Ginastera choral work at Carnegie Hall.

“For me, all music is meant to induce a transformative experience upon the listener. … I want it to be life changing,” exclaimed Wachner, when we spoke with him at Trinity’s office shortly after the start of the New Year. He actually sees it as “moral responsibility of the compositional craft and the performative craft as well.” In booklet notes he wrote for the first CD devoted to his vocal music conducted by someone else, a 2010 Naxos disc containing both sacred and secular choral music performed by the Elora Festival Singers under the direction of Noel Edison, Wachner described an often-perceived schism between music he calls Apollonian (either music for worship or academic music) and music that is Dionysian (popular music or theatrical music including operas and ballets). His own aesthetic inclinations, he pointed out, have led him to ignore this schism and to freely mix approaches that have traditionally been polar opposites. 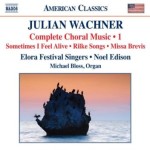 This is in no small part due to his family background, how he first became involved with music, and how that involvement led to his own personal religious awakening. He describes his parents as “sort of California hippies” and remembers that there was “no religion in my life at all.” His mother “grew up Catholic but totally rejected that,” and his father had a Jewish background but was also a non-practitioner even though Wachner learned from his paternal grandmother, who had been a strong influence in his life, that among his ancestors “were all these chief rabbis in Germany.” But there was another important influence—a musical one. Wachner’s stepfather Robert Cole was a conductor and served as Michael Tilson Thomas’s assistant at the Buffalo Philharmonic during Wachner’s childhood. “So I had that whole world of post-Bernstein energy,” he acknowledges. An early piano teacher of his recommended that he sing as a boy chorister at St. Paul’s Cathedral in Buffalo, so he started doing that at age seven.

“It was really just a performance opportunity,” Wachner explains. “When I went there, I thought of my identity as Jewish, even though I had never been bar mitzvahed or anything like that. But it was understood that that was what I was and it was cool with everybody.” 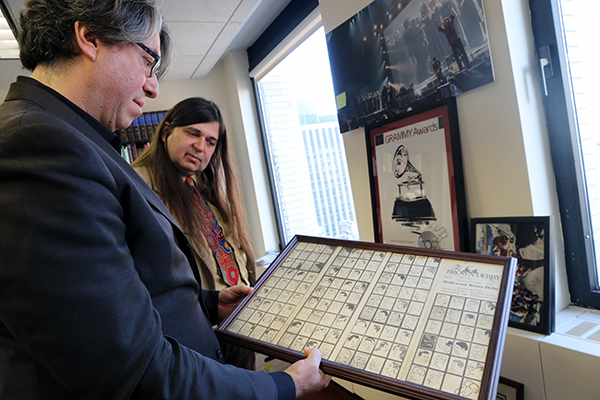 But a few years later, he had an epiphany. By this time, he had moved to New York City and was singing with the St. Thomas choir:

Part of it was the music and the power of the liturgy. But the other part of it was the actual mission and message. We would sing the Byrd Mass in Five Parts and this incredible music by Howells, but then we’d go out and feed the homeless. That was part of our training. That whole gospel message really resonated and I became an Episcopalian at age 11 or 12.

After his conversion, however, Wachner remained deeply involved with a great deal of music outside of the Christian sacred repertoire. In high school, he even played in rock bands while sporting a Mohawk and an earring. “As I went through life, I had always a sort of wilder side and a more conservative side,” he confesses. At the same time he was immersing himself in the downtown rock club scene, he was composing his first polyphonic mass, a Missa Brevis for chorus and organ; he points out that “the Sanctus of it is has almost an ‘80s pop ballad chord progression which comes from the Depeche Mode/Smiths/Howard Jones world I was living in during that period.” 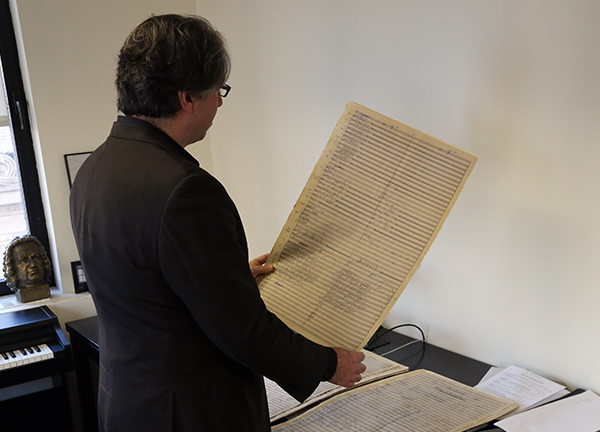 Wachner studying a score in his studio.

That 1987 mass, which appears on the Elora Festival Singers’ disc, sounds more secular than parts of his ethereal cycle of Rilke settings, Rilke Songs (2002), or even his 1998 E. E. Cummings-inspired cycle Sometimes I Feel Alive, despite their texts. (Both of which also appear on that recording.) For Wachner, finding the sacred in the secular is as important as finding the secular in the sacred. In fact, he believes there is a fluid continuity between the arts, the sciences, and religions—all religions. That multiplicity of perspectives is something he aspires to tap into as much as he can in anything he composes or performs.

My definition of sacred is so liquid that I am able to interpret everything in that direction in the same way I see everything as theater as well, how action follows action and produces some kind of response or result. … I’ve been drawing on not only the Judeo-Christian tradition but also Islamic, the Buddhist world, the Martial Arts, as well as the scientific. I’m also a Feldenkrais practitioner. For me embracing all that is available to us now is actually a sacred act. The gift of intelligence and curiosity and seeking is a God-given act, if you want to say that, or that humans are endowed with as part of our make-up. 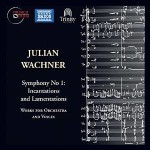 Wachner’s “little c” catholic interpretation of faith is the inspiration behind all of the music that is featured on a 3-CD set devoted to his vocal and instrumental works released last year on Trinity’s own Musica Omnia label. The track list includes extremely flamboyant settings of psalms, a majestic symphony, and a powerful trumpet and organ duo, Blue Green Red, whose only immediate sonic relationship to sacred music is that it features a pipe organ. Also included is Wachner’s over-the-top arrangement of the ubiquitous “Joy To The World” by George Frederick Handel (a composer whose sacred and secular works he has frequently conducted and whose own balancing of the sacred and secular is perhaps the most famous compositional precedent for what he is doing).

“In terms of musical language and compositional technique, I think it’s all available to both areas,” Wachner explains. “In terms of what’s off-limits, I haven’t really found that yet. I interpret work theatrically; I tend to do that with everything. But if I were to do a sacred work in a liturgical setting, I tend to downplay my physical performance. I do that to draw more focus to the specific theater of the liturgy and not the theater of me as performer. I tone down my gestures; it feels more appropriate to temper the extremities. For me temperance comes in the performance; in the creation of a piece of music, the possibility of using everything at my disposal adds to the ecstasy of it and those ecstatic moments are the high point.” 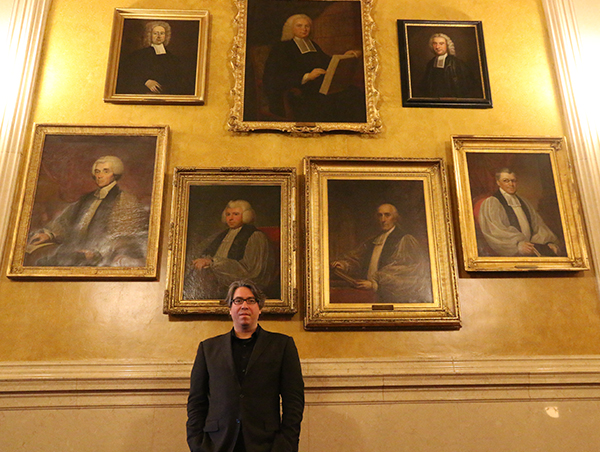 As the music director of Trinity Wall Street, Julian Wachner is part of a long lineage of music directors and vicars at the church. Pictured behind him are portraits of seven of Trinity’s previous vicars.