Isolating the Senses
NewMusicBox
Written By

Although I tend to listen to music in the foreground even when it is intended as background, I’m still aware that optical components are part of any auditory experience, whether they are conceptually part of the design or not.

I completely concur with Alexandra Gardner’s assessment in her most recent post that “selfless engagement can make the individual an even better composer.” However, I was initially troubled by her albeit correct observation that when composing for film “the music holding its own is never the main goal of a score; really the goal is to, well, vanish. To be an invisible cloak that makes the entire experience work.”

I know I’m not the target audience for most motion pictures, since for me it’s always about the music to the point that I will sometimes pay such close attention to what’s going on in a film score that it impinges on my ability to stay engaged with the narrative. This probably explains why I appreciate the films of someone like John Carpenter, even though I tend to really dislike horror films, since I really like the music in his films (which he actually writes himself). This means I can focus on the music and ignore the gore much of the time. (Although, true confession time, I loved his film They Live when it first was released in 1988, and perhaps love it even more so now in an era where its bizarre sci-fi take on 1% vs. 99% seems strangely prescient.) This might also explain why I can count on one hand the number of times I’ve been to see a film in a movie theatre in the last decade, preferring to watch and keep DVDs of any film of interest. This enables me to watch them as many times as I need to in order to let the music take me where it inevitably will and still eventually come to appreciate other significant things, such as the screenplay, acting, cinematography, etc.

Despite all that, I would be duplicitous if I claimed that I could listen without the intrusion of other senses. The way I sometimes listen to music in a film—even if it results in my foregrounding it more than I should—is still very influenced by whatever it is I am seeing on the screen. How could it not be? I was extremely mindful of this last Thursday night when I attended the New York re-premiere of the 1922 Ernest Lubitsch film Das Weib des Pharao (which translates as “The Wife of Pharaoh” although its official English-language title is, “The Loves of Pharaoh,” rather confusingly since in the film the Pharaoh Amenes has but one infatuation). Although Lubitsch’s ancient Egyptian epic had been lost until it was reconstructed this past year from various fragmentary prints (portions of the film are still missing), the music that was originally composed for it—by German composer Eduard Künneke, survived intact. However, for the Brooklyn Academy of Music’s screening, the original score was replaced with a brand new one by Joseph C. Phillips Jr. written for his ensemble Numinous which he conducted live.

Though I was thoroughly engrossed in Lubitsch’s mise-en-scène, I also found Phillips’s score to be totally riveting. Curious about how certain timbral combinations were being made (specifically some including harp), I would furtively steal my eyes away from the film screen to look at the musicians every now and then. (Good thing most motion pictures don’t feature live soundtracks or I’d never know what was going on story-wise in movies.) 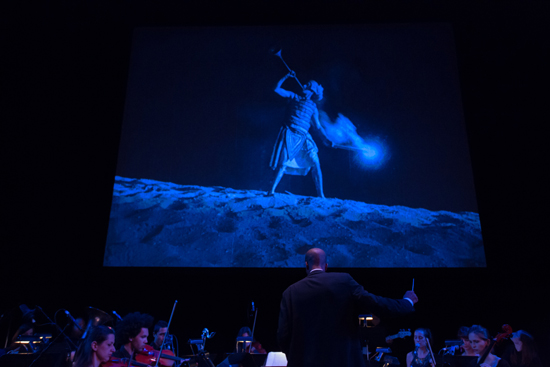 One of the most effective moments in The Loves of Pharaoh is when a guard spots Theonis and Ramphis (the heroine and hero in the film) trespassing in Pharoah Amenes’s newly-built treasury (for which the punishment is death). In Joseph C. Phillips’s new score for the film, the guard’s trumpet call is matched by an equally forceful trumpet blare. (Photo by Ed Lefkowicz, courtesy Lisa Thomas and Sandy Sawotka, Brooklyn Academy of Music)

Optical components, of course, are part of any auditory experience, whether they are conceptually part of the design or not. Even when we close our eyes to listen to music using headphones, we are determining a visual frame for the listening experience. For most people, closing their eyes is a way to better foreground music since visual stimuli tend to dominate our sensory perceptions. But, just as there is no such thing as a silent space, there is also no such thing as an invisible one.