In the Garden of Memory at the Chapel of the Chimes

The brainchild of organizer Sarah Cahill, this inimitable event, which is presented by New Music Bay Area and the chapel, features several dozen Bay Area artists scattered throughout the labyrinthine and photogenic facility. 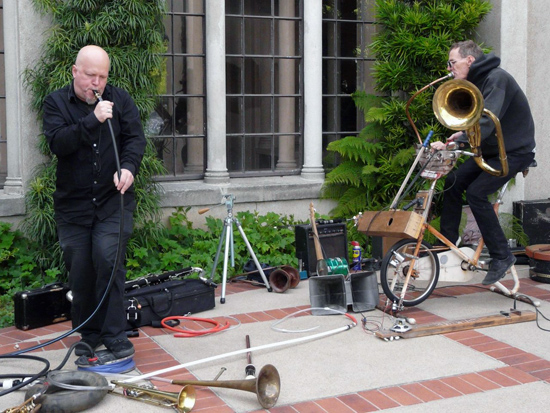 Welcome to Garden of Memory 2012 – Jaroba (playing the reed instrument) and instrument maker Keith Cary (pedaling) at the entrance to the Chapel of the Chimes.

The Chapel of the Chimes in Oakland bills itself as a “Columbarium, Crematorium, Mausoleum and Funeral Home,” but on the summer solstice each year it comes alive as a concert venue as well, with a four-hour celebration of experimental sound and music-making called Garden of Memory. 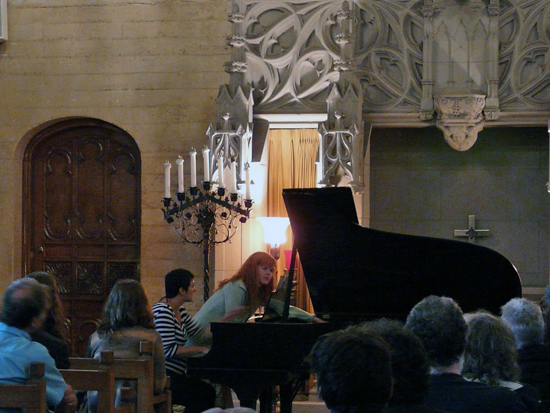 The brainchild of organizer Sarah Cahill, this inimitable event, which is presented by New Music Bay Area and the chapel, features several dozen Bay Area artists scattered throughout the labyrinthine and photogenic facility, which was designed in 1926 by Berkeley architect Julia Morgan (with additions added by other architects through the years).

Taken as a whole, Garden of Memory can be seen almost as a site-specific sound installation. Cahill places the performers in rooms large and small on all three floors of the building, and even outside on terraces and at the entrance. Since the event lasts from 5 to 9 p.m., most performers do sets intermittently throughout the evening. Some share their allotted space, taking turns with other musicians. 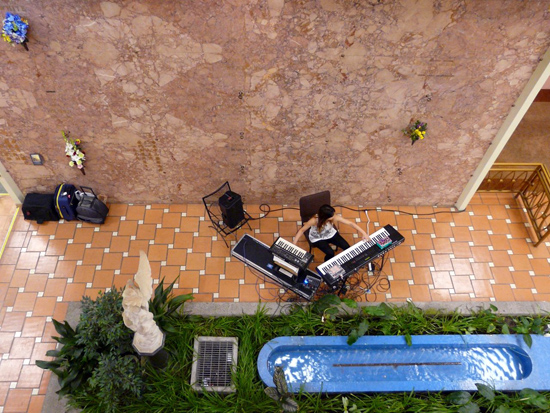 Keyboardist Motoko Honda in the Garden of Ages, working with sampled toy sounds.

The performances are generally isolated from each other, but not entirely; there is always an awareness of more music happening nearby. The ambient electronic music of Wobbly and Thomas DiMuzio mixed with the Cornelius Cardew Choir intoning Pauline Oliveros’s Heart Chant in a chamber one floor above. 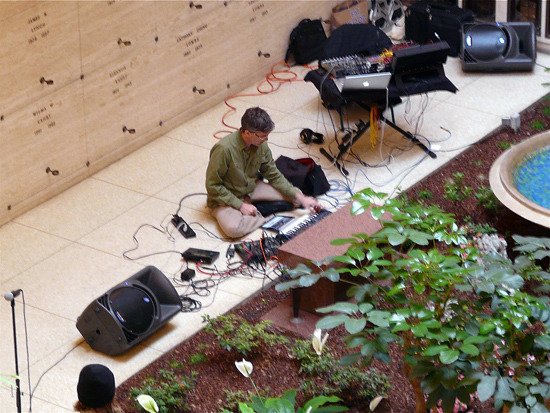 Wobbly (aka Jon Leidecker) in the Chapel of Tenderness, with a mic set up for audience members to use as they wished.

While a burbling fountain triggered pitches from a Morpheus synthesizer in Maggi Payne’s installation, Laurie Amat’s soprano voice drifted down the hall like a siren call. 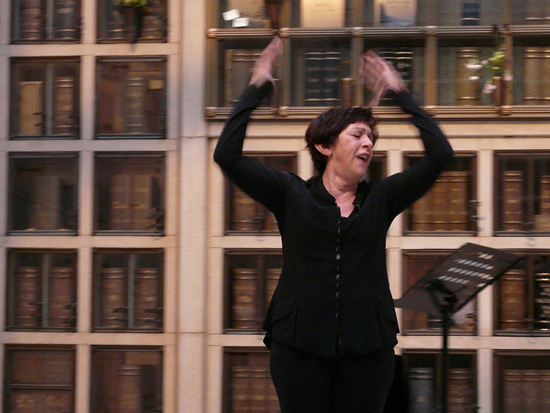 Laurie Amat in the Chapel of St. Luke.

As an audience member moving through the spaces, there is a constant sense of discovery. With so many performers, there’s no chance of running out of new things to hear, and with the enormous diversity of artistic styles among the musicians, it’s impossible to anticipate what you’ll find upon rounding the next corner. 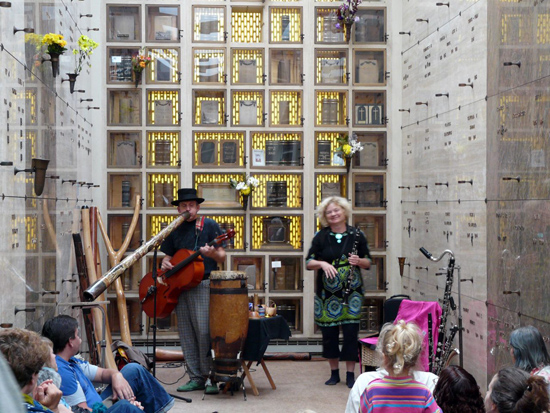 Stephen Kent and Beth Custer, in the Sanctuary of Dawn.

Expectations are continually confounded: walking down the stairs from the room where Beth Custer is playing a slow groove on clarinet with Stephen Kent, who’s playing a didjeridu with a cello strung over his shoulder like a guitar, you happen upon Albert Behar introducing through a megaphone the premiere of his Book of Five Waltzes on accordion. It’s a joyful evening, celebrating the multifarious ways that people can play with sound. 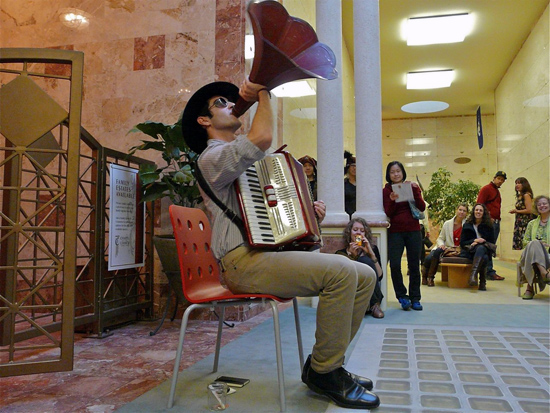 There are a few larger rooms that can accommodate some of the more well-known performers taking part. Paul Dresher and Amy X Neuburg traded sets throughout the evening in the Julia Morgan Chapel, as they do every year. (This year was notable, though, in that their set-up time in the chapel was delayed because an open-casket viewing ran long. “That’s what happens when you take over a mausoleum,” Cahill noted.)

In the main chapel, one could hear the Del Sol String Quartet, or Cahill and Regina Schaffer performing a four-hand piano piece by Terry Riley, or the eight-voice women’s vocal ensemble Kitka singing Bulgarian love songs. These larger spaces have rows of seating and allow for a more concert-like atmosphere, removed from the milling in the passageways. 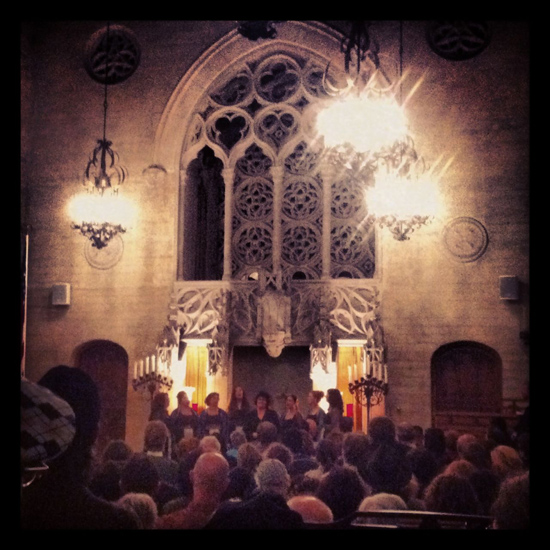 Kitka with guest Tzvetanka Varimezova, in the Chimes Chapel

But the social interaction in the common areas is also an essential part of the Garden of Memory experience. Friends run into each other and share their musical discoveries, before heading off to peer into another room. 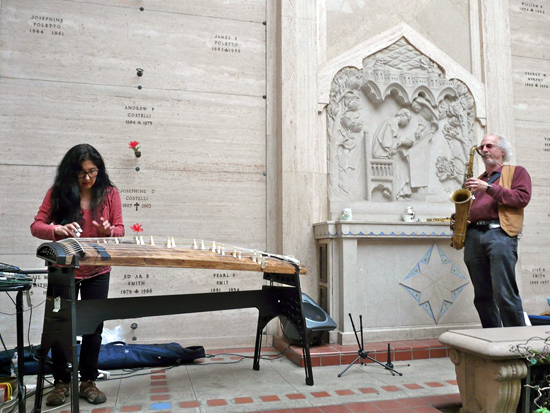 Miya Masaoka and Larry Ochs, in the Garden of St. Matthew.

And the smaller rooms provide audiences a rare sense of intimacy with the performers. Sitting on the floor or leaning on a wall, it has the feel of listening to someone make music in his or her living room—in a crazy house with three dozen living rooms. 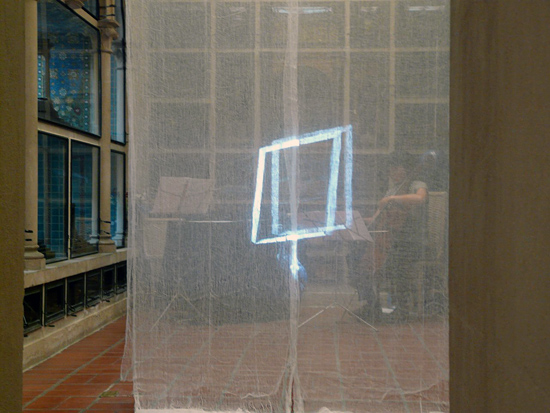 Theresa Wong, in the Chapel of Palms behind gauze on which images were projected.

While some performers left the fourth wall intact between them and the audience, others casually interacted with them or invited participation in the performance. As a result there’s a real sense of a musical community, gathering to take pleasure in making and listening to sounds. 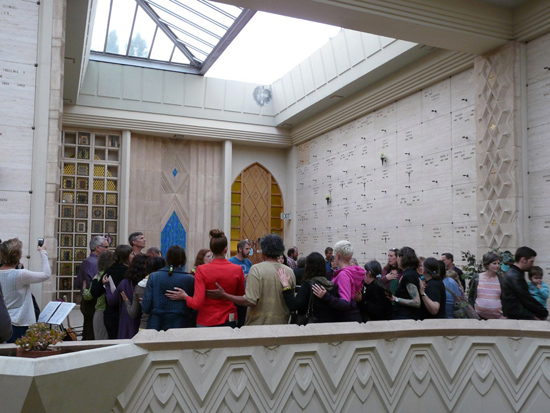 The Cardew Choir, which invited audience members to participate in the performance of Oliveros’s Heart Chant: Place your right hand over your heart and place your left hand on top of the left hand of a person in the circle. That person will open the circle and place her/his left hand on your back behind your heart.