In the Bay Area: Cahill at the Piano and [email protected]
NewMusicBox
Written By

In the Bay Area: Cahill at the Piano and [email protected]

Pianist Sarah Cahill’s engaging solo recital last Friday included an advance look at a program of music by Henry Cowell she’s planning to perform at San Quentin State Prison next month. Though nearly all of the [email protected]’s programming is traditionally in the Bach/Beethoven/Brahms vein, one concert this year’s stood out for its programming of Nancarrow, Cage, Reich, and other 20th-century composers.

Pianist Sarah Cahill’s engaging solo recital last Friday, presented by Old First Concerts, included an advance look at a program that Cahill is planning to perform at San Quentin State Prison next month of music by Henry Cowell. Also included were pieces by three other composers who were either born or now live in the San Francisco Bay Area, and several works by the late Canadian composer Ann Southam. In a hall filled with familiar faces, Cahill introduced Piano Step by Samuel Carl Adams (composer John Adams’s son) by saying “most of you have probably known him since he was little.” Similarly, Cahill and Shinji Eshima, whose Delta 88 was given its premiere performance, have a friendship dating back 40 years, and John Kennedy, who moved to the Bay Area from Santa Fe only a year ago, has already established a regular local presence. 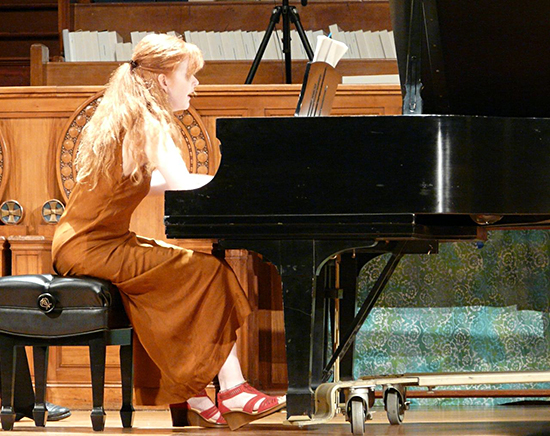 Cahill played two works by Cowell on this program, Rhythmicana and High Color, which were both written in 1938, during the four-year period when Cowell was incarcerated on a morals charge at San Quentin in Marin County, north of the Golden Gate Bridge. (A recording of Cahill playing High Color is available on New Albion Records’ document of the 1997 Henry Cowell Piano Festival in Berkeley, which coincidentally is when Cahill first met Kennedy.) Cahill’s upcoming project is a performance at the prison on September 20 of music that Cowell wrote while imprisoned. In addition to works for piano, Cahill hopes to accompany a few of the inmates in Cowell’s songs from this period and to enlist other musicians to perform Cowell’s United string quartet and other works. (The prison has a history of arts advocacy; the Marin Shakespeare Festival has been working with inmates annually to present a Shakespeare play, alongside works written by the incarcerated reflecting Shakespeare’s themes.)


Delta 88 by Shinji Eshima, a longtime bassist with the San Francisco Opera and San Francisco Ballet orchestras, was constructed with the idea of using each key across the full range of the piano once, with the sustain pedal held throughout the two-and-a-half minute work. The metaphor, Eshima writes, is of “the many things we experience but once in our lives.” As such, Eshima moves through some of the notes very quickly using fast arpeggiations up the keyboard, but other pitches are slowed down and observed more carefully, like the final three which settle at the lowest and highest ends of instrument.

John Kennedy’s Naturali Periclitati (“Endangered Natures”) was written in 2007 for a program that Santa Fe pianist Marthanne Verbit was preparing on the deteriorating state of the environment. (Her recording was released on Albany Records’ Endangered.) An evocative 15-minute piece in three movements, Kennedy uses large register separation between voices throughout the work, creating an unsettled sense of multiple realities coexisting uneasily. Piano Step (2010), written for Lisa Moore by Samuel Carl Adams when he was 25, is constructed on an 11-chord passacaglia that begins its eight-minute journey as an oddly mixed-metered homophonic hymn. Along the way it breaks apart into different registrations, dissolves into stuttering single notes, and gets interrupted by occasional interjections, before settling into an unexpected, quiet and simple statement in the distance right at the end. 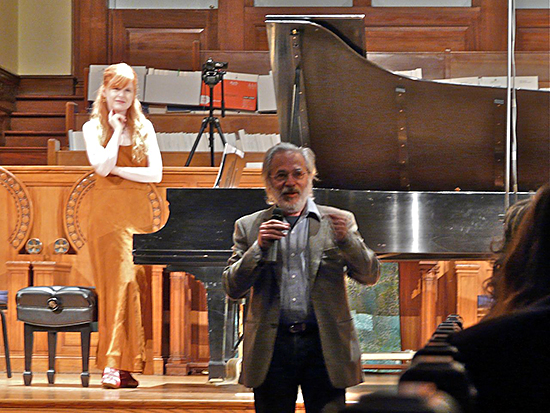 While Eshima and Kennedy were both on hand to speak about their pieces (Brooklyn-based Adams was not able to attend), Cahill asked Richard Friedman, who has a weekly program on KALW called Music from Other Minds, to introduce the works by Ann Southam—Glass Houses No. 7 and Rivers, Series II, No. 2. (Cahill also hosts a new music program on KALW, recently renamed Revolutions Per Minute.) The infectious enthusiasm with which Friedman spoke about coming across Southam’s music for the first time is probably familiar to all NewMusicBox readers who have at one time said, “OMG, I just heard this great thing and I have to play it for you right now!” Indeed, this delight in discovery pervaded the entire concert, which had the feeling of a small group of friends taking pleasure in sharing some nice things they found.

Cahill’s performance of Southam’s fluid, minimalist works—Glass Houses No. 7 has a rolling nine-note pattern in the left hand that repeats throughout; Rivers a gentle rocking pattern in the right hand—were mesmerizing and organic. In his introduction, Friedman said that while many composers write music about water, Southam’s music “sounds like water,” and in fact, as the left hand melody crossed and flowed through the repeating right hand figure in Rivers, the line picked up and subsumed the notes of the ostinato like pebbles carried along by the current.

Cahill closed the program with a spirited delivery of Cowell’s High Color, which evokes the “dazzling gold” in the hills of Ireland. Cowell overlays an Irish jig tune with forearm clusters, which results in a joyous cacophony that Cahill confidently delivered with her refreshing lack of unnecessary showmanship and pretense. The concert was greeted with a rousing standing ovation, which yielded a final work by Southam, also from the Rivers series—a quiet and reflective send-off into the evening. 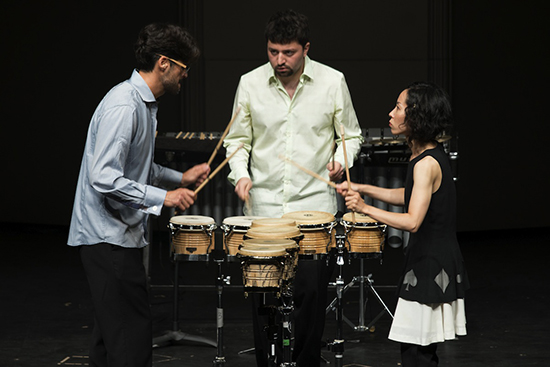 The small rural outpost that Henry Cowell was born in bears little resemblance to the Menlo Park of today. Located in the midst of Silicon Valley, Menlo Park is now home to Facebook and numerous venture capital firms, as well as the [email protected] summer chamber music series, which was founded 11 seasons ago by New York-based artistic directors David Finckel and Wu Han, who also head the Chamber Music Society of Lincoln Center. Though nearly all of the festival’s programming is traditionally in the Bach/Beethoven/Brahms vein—especially this season, which is titled From Bach—one concert on this year’s Carte Blanche recital series stood out for its programming of Nancarrow, Cage, Reich, and other 20th-century composers, featuring percussionists Christopher Froh, Ayano Kataoka, and Ian Rosenbaum. 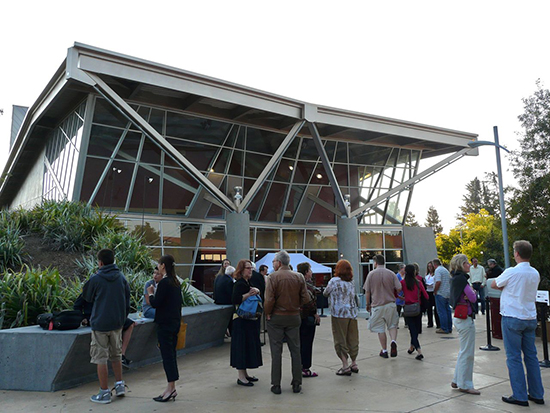 Held in the 500-seat theater at the Center for Performing Arts on the campus of the Menlo-Atherton High School, this shrewdly chosen program of solos, duets, and trios drawn from international contemporary percussion repertoire was an unadulterated delight for the audience throughout. More than once during the intermission I overheard people say with pleasure, “That was really fun!” and “This is not what I expected!” (The only work from earlier than 1948 was Kataoka’s transcription for solo marimba of the first three movements of Bach’s Violin Partita No. 3, which she played with such grace and flair that audience members applauded heartily after each movement.) 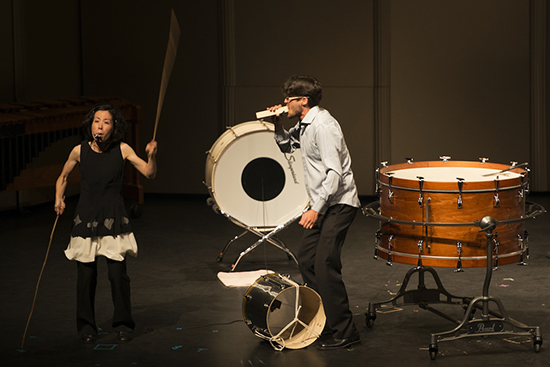 The three percussionists, who do not perform regularly as a trio—Froh is based in the Bay Area, while Kataoka and Rosenbaum are from the East Coast, both having been members of CMS Two—collectively demonstrated an interest in theatricality, employing lighting designs for several of the works and programming Thierry de Mey’s Table Music, performed with virtuosic verve and occasional moments of hamminess, and two movements from Mauricio Kagel’s Rrrrrrr…. The three gathered around one bass drum for Nebojsa Zivkovic’s wild and wildly entertaining Trio per uno, and followed that with the highlight of the program for me, Rosenbaum’s supremely elegant and meditative reading of John Cage’s In a Landscape adapted for solo marimba.

Trio per uno by Nebojsa Zivkovic
To conclude the program, four pairs of bongo drums were arranged in a T (instead of a straight line) for the three musicians to play Part One of Steve Reich’s Drumming, written for four percussionists but reconfigured to be possible for three. The [email protected] crowd, which had never before been offered an all-percussion concert at this festival, gave the musicians an enthusiastic and well-deserved ovation, showing yet again that with compelling programming and a charismatic performance, even an audience used to a steady diet of the European classical canon will respond to an excellent concert filled with music new to their ears.
Table Music by Thierry de Mey