In A Novel About New Music, Do Re Mi Meets DNA

Not only do many composers of new music have trouble finding an audience for their music, they–unlike writers and detectives–are rarely portrayed in novels. One notable exception is the 2014 novel Orfeo by Richard Powers, whose protagonist is a contemporary composer who inadvertently demonstrates how avant-garde music can reach “hundreds of thousands of listeners.”

It’s no wonder that some composers of new music feel neglected. Not only do they have trouble finding an audience for their music, but they, unlike writers and detectives, are rarely portrayed in novels. One notable exception is the 2014 novel Orfeo, by Richard Powers, whose protagonist is a contemporary composer who inadvertently demonstrates how avant-garde music can reach “hundreds of thousands of listeners.” Just set up a home laboratory to insert musical patterns into the genome of a common bacterium; go fugitive when your lab is raided by Homeland Security fearing a public health threat; and become so notorious for messing with DNA that an investigative reporter unearths one of two recordings of your old experimental opera, an excerpt of which is aired on radio news.

Understandably, some contemporary composers and musicians may prefer to have a less ambitious main character represent new music. Perhaps one who would rather build a recording studio in his home than a biochemical lab.

However, readers of Orfeo will discover that composer Peter Els’s attempt to have self-replicating cells broadcast his tunes into the future and the flight from the law of this “Bioterroist Bach,” as he is branded by the press, are hooks for those keen on plot. But music lovers will delight in the long passages in which Els is stock-still, listening and responding to very familiar 20th-century compositions. 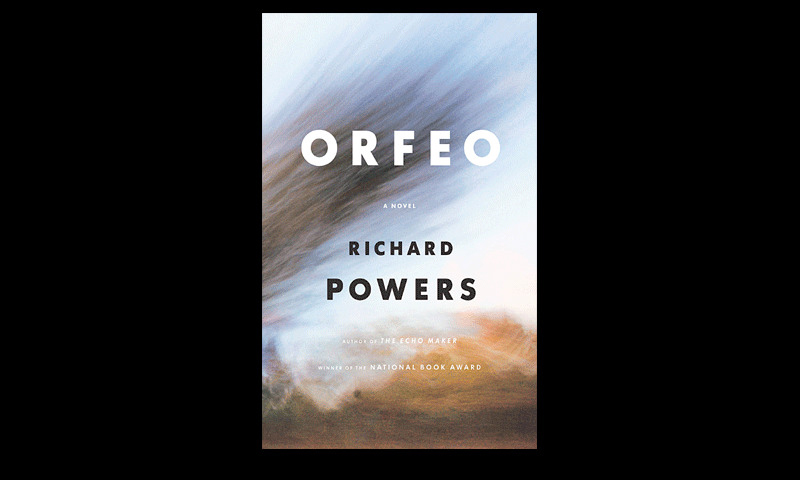 Could there be any other novel that devotes so many pages to analyzing such music? Powers educates his readers about this subject the way that Melville informs us about whales in Moby Dick. He doesn’t just tell us that Els’s high school girlfriend turns him on to Mahler’s Kindertotenlieder, but rather gives us a song-by-song recap—from “The orchestration, the nostalgic harmonies: everything wrapped in the familiar late nineteenth century, but laced with the coming fever dream,” to “The full orchestra, at last—the wrenched strings, the plummeting winds—pumps out a tempest.”

While attending the University of Illinois at Champaign-Urbana (“that little Darmstadt in the prairies”), Els goes to the 1967 premiere of John Cage’s Musicircus, held in the school’s Stock Pavilion, emptied of the animals that usually provide the sounds. In the thick of the “Happening,” he spots Cage himself: “Smiling he slips through the crowd and back up on a performance platform, where he joins a quintet pouring water into different-sized bowls and tapping them, taking their time cues from an elaborate piano roll…. For a moment, in some America deep in his neocortex, [Els] can hear every ringing pitch the mute bowls make.”

Music lovers will delight in the long passages in which Els is listening and responding to very familiar 20th-century compositions.

Decades later, when the retired professor is teaching a class at a facility for the elderly, he tells his students the inspiring story of the German camp where, in 1941, Olivier Messiaen wrote Quartet for the End of Time, then rehearsed and performed it with three other prisoners. Els’s introduction to the piece before playing it in class concludes with “the end of the End”:

The violin rises, the piano climbs along toward some final immobility beyond human patience and hearing. The praise wanders higher, into C minor, through a frozen infield of ambiguous diminished and augmented chords….From out at the edge of the key and fingerboards, the line glances back at a lost Earth on a cold night, when there is time no longer.

But the book’s bravura act of listening takes place after Els quits his teaching job because he has to go on the lamb. It’s serendipitous, as so often happens these days in buildings with piped-in music. And since the scene takes place in the coffee house where 70-year-old Els used to hang out in college, it illustrates that where we listen to a piece of music, and at what point in our lives, strongly affects how we hear it.

When Els first takes a table amid the ambient cafe conversations, he sees that the couple next to him are poring over a score that he can read from his table. The piece for chamber orchestra is “lush with melodies everyone in the audience would leave the hall humming,” Els suspects, then admits that at twenty-five he “would have thought the thing insipid and reactionary. At seventy he wished he’d written it at twenty-five.”

Where we listen to a piece of music, and at what point in our lives, strongly affects how we hear it.

Then from the cafe’s speakers he hears a soprano very slowly sing, “How small a thought it takes to fill a whole life.” The familiar piece jolts him out of his regrets, and when the woman at the next table points up and asks her boyfriend, “What is this?” he doesn’t know, but Professor Els responds, “Reich. Wittgenstein. Proverb.”

He does indeed know Steve Reich’s beautiful, 14-minute composition well. For over eight pages, Els’s thoughts provide a close commentary that even clocks the piece the way long-distance runners monitor themselves. “Pitches cluster above the throbbing vibes” at the point when “[t]he piece has lasted twice as long as any self-respecting song and shows no signs of stopping.” At the six-minute mark, after Els points out the use of early music polyphony, he notes that “the parallel tenors rush back in. Twelfth and twenty-first centuries alternate, competing with each other. Those two broad streams flow together into a further sea.” Eleven minutes in, Reich is still in full stride, “the endless dominant pedal point in the organ, the scraping seconds in the tenors—and the piece breaks through into a clearing.”

The contrast between Els’s reaction to Proverb and that of the young people around him makes it seem like he’s the only one in the room with his ears open. (Since so many of them are wearing earbuds, that’s close to the truth.) As he looks around at the all the students staring at their laptop screens or lost in equations on yellow legal paper, he thinks, “The music might be cha-cha, for all anyone hears.” Whereas when he hears two tenors bob in parallel above an organ sustain, “Els’s lips twist in unwilling joy” (an oblique way of saying it’s the first time he’s smiled in dozens of pages) and “the ancient harmonies spread through his bloodstream like an opiate.” Later on in the piece he feels “these spinning, condensed ecstasies, this cascade of echoes, these abstract patterns without significance, this seamless breathing leaves him sure, one more time, of some lush design waiting for him.” When “choirboy clarity thickens, then smears out thin as gold leaf,” and Els is so moved that “his surroundings turn to wet crepe,” he can finally sense a response in his neighboring couple: “The woman’s soul is all up in her ears. The boy leans forward in a frightened crouch; someone is doing a thing better than he ever will.”

In this analysis of Proverb, the one sentence of lyrics is repeated five times in the book’s text, the last time printed vertically on the page with spaces between the letters to indicate how slowly the sopranos are singing them. But what do Wittgenstein’s words really mean? That’s a loaded question, for as Guy Davenport points out in his essay “Wittgenstein,” the philosopher questioned the meaning of every bit of language. “The world to him was an absolute puzzle,” Davenport writes, “a great lump of opaque pig iron.”

Yet characteristically, Els relates the lyrics to his own music, thinking how he has “banged on that smallest thought for his whole life without ever getting in,” and later while reflecting on the people closest to him, realizes that “all I ever wanted was to make one slight noise that might delight you all. How small a thought it took.”

But it seems like Els is confusing a thought with a project or an obsession. In a program note on Proverb in his book Writings on Music (1965-2000), Reich himself discusses the line from Wittgenstein. He writes that the philosopher’s “close, subtle examination of everyday speech had a strong appeal to me. As to his text that I used in Proverb, I was trying to embody it in the piece. That is, the ‘small thought’ is the idea of canon or round.”

Any novel about a contemporary composer calls for comparison with Thomas Mann’s Doctor Faustus.

Any novel about a contemporary composer, especially one as overreaching as Els, calls for comparison with the most famous fictional account of a maestro in the 20th century, Thomas Mann’s Doctor Faustus. Based on the German Faust legend, Mann’s hero Adrian Leverkühn makes a pact with a Mephistophelean figure to sacrifice his soul for musical inspiration and fame. Even before he starts tinkering in his lab, Els recognizes his affinity with Leverkühn, calling his striving to launch his career “the full Faustian ride.” After having a brain scan at age 65 and looking at the results with his doctor, “he pictured Faust looking at his own neurons on a monitor—his bottomless hunger laid bare, his desire for mastery swirling through his brain like cigarette smoke curling in the air.”

Proving that Faust has achieved a kind of immortality in the English language, his name comes up again in two reviews of the contemporary, multimedia opera Three Tales, also by Steve Reich, along with video artist Beryl Korot. The work explores three historical uses of technology: the flight of the Hindenberg, the Bikini Atoll atom bomb tests, and the cloning of Dolly the sheep—that nonfiction meddling with DNA. In his review in The New Yorker, Alex Ross called the opera “a surprisingly fervent morality play, pointing a minatory finger not so much at technology itself as at the Faustian hubris that drives it forward.” Having shown himself to be such a fan of Reich’s, if Peter Els saw Three Tales, could it have tempered his tampering in the lab?