If Elton John Sings But Everyone Else Does Too, Does It Make a Sound?

What is it with people and singing along? No really, what is it? Here, I offer four possible explanations for a phenomenon that, for anyone who celebrates live performance, doesn’t make much sense.

I spent my adolescence doing musical theater. As teenagers, my friends and I went through life singing and dancing—in hallways, parking lots, cars, and kitchens. Our friend Nick was a harsh critic of this practice.

Whenever someone launched into a melody, he’d ask, “Hey, who sings that song?” And regardless of our enthusiastic answer, his grim punchline was always the same: “Yeah—let’s keep it that way.”

I thought of Nick this past Saturday night, as I sat in an unnervingly large crowd at the Allstate Arena to hear Elton John. Because the problem was, sometimes I couldn’t hear Sir Elton over the other eighteen thousand people in the room. 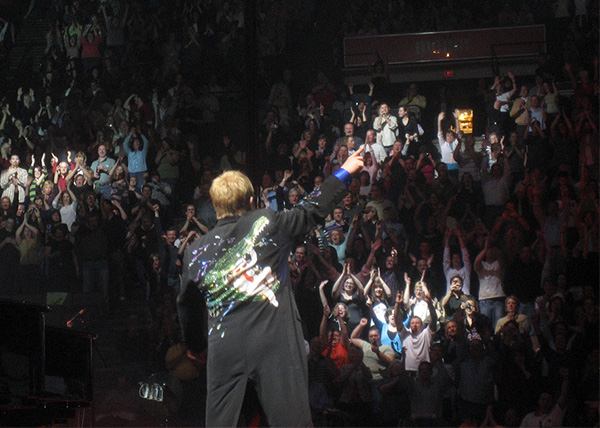 Scene from an Elton John concert in Cincinnati, Ohio, 2009
Photo by Sean Biehle on Flickr

As a performer myself, I found it deeply unsettling to see someone as legendary as Elton John get sonically engulfed by the voices of his adoring fans. These people had paid hard-earned money and traveled on a cold night to hear one of the great heroes of pop music perform live. That’s really him up there! It’s not your stereo this time! I argued silently. John sounds fantastic, and to hear the way he delivers these melodies as a man in his sixties is fascinating. Yet at the climactic moments of “Rocketman,” or “Your Song,” or “Yellow Brick Road,” it was their own unremarkable voices the audience apparently wanted to hear.

Today, I will put on the mantle of the classically trained elitist curmudgeon and inquire: what is it with people and singing along? No really, what is it? Here, I offer four possible explanations for a phenomenon that, for anyone who celebrates live performance, doesn’t make much sense.

1. Let’s start with the most compassionate explanation—the one that assumes that human beings are good people who don’t want to endlessly aggravate each other. This explanation goes as follows: audiences sing along at concert because singing is fun, and it feels good. Singing your favorite songs with a big group of people, being close to all those bodies breathing and resonating, can be a joyous expression of togetherness. Most adults haven’t been part of a singing community since they were thirteen years old. On some primal level, they miss it. They crave the experience of merging with and becoming part of their favorite music. And then one evening, they come face to face with one of the greatest songwriters of all time. They get excited. And when human beings get excited, they sing.

2. If we’re not feeling so generous towards our fellow human beings as they drink Miller Lite under a giant dome and drown out Sir Elton’s subtle melismas and timbre changes (seriously!), it may be time for a slightly less warm-and-fuzzy explanation: they’re blithely singing along because they do not acknowledge the humanity of the live performer. To these singers-along, what Elton John decides to do with this spontaneous vocal moment is irrelevant. What matters to them is the melody they’ve heard, memorized, and sung along with for the past three decades. Trying to convince them to pay attention to a live vocalist is like trying to present a homemade bechamel sauce to someone who loves Kraft macaroni and cheese too much to care. (I know—ouch.)
3. Still angry about the sing-along, but don’t want to hate everyone around you? Consider the possibility that, plain and simple, the hegemony of the recorded “hit” is to blame. It’s hard to imagine a piece of music whose recording feels more definitive, more final and complete, than “Tiny Dancer.” The way that a typical listener relates to these recordings—via some speakers, an iPhone, and the American open road—has obliterated the song’s possibility of existing as a live, changing, in-the-moment experience. I mean, even the cast of Almost Famous couldn’t resist singing.

4. Not convinced by any of the above? There’s one final, sobering possibility, which is that the singers-along aren’t the problem—I am. Maybe there’s nothing offensive about belting along to music that, after all, seems custom-made for exactly that. “Bennie and the Jets” can survive the senile humming of the man next door in a way that a Mozart string quartet cannot. The massively powerful sound system of the Allstate Arena made it possible (most of the time) for me to hear Elton over the crowd. Instead of casting sidelong glances at my neighbor, perhaps I ought to have remembered the all-important adage for surviving a crowd: If you can’t beat ‘em, join ‘em.