The International Contemporary Ensemble (ICE) has announced that Vanessa Rose will be its new executive director as of September 1, 2015. 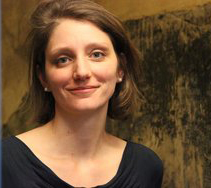 The International Contemporary Ensemble (ICE) has announced that Vanessa Rose will be its new executive director as of September 1, 2015 at which point ICE founder Claire Chase will remain co-artistic director and flutist in the ensemble alongside co-artistic director and clarinetist Joshua Rubin. Rose comes to ICE from the Lark Play Development Center where she served as director of development from 2013-2015. Prior to that, Rose was managing director of The Knights, a New York-based orchestra collective, and associate director of patron program and membership at the Metropolitan Opera. In 2006, she completed the League of American Orchestras’ Orchestra Management Fellowship Program, which included residencies with the Dallas Symphony, Elgin Symphony, Aspen Music Festival and School, and the San Francisco Symphony. Rose was selected by ICE’s Board of Directors on August 3 following an 18-month international search.

“I am thrilled to have this opportunity to collaborate with the creative and inspiring artists, supporters and partners in the ICE community,” said Rose. “A longtime ICE fan, I am very excited to help the group expand its groundbreaking programs and exceptional music-making.”

Claire Chase adds, “Of all the trails that this mighty group of artists has blazed over the last decade and a half—from our seedlings as students at Oberlin in 2000, to our very first public concert in 2002 produced on $603 amassed from my holiday catering tips, to the group’s performances this coming Sunday at Alice Tully Hall—this moment of welcoming new leadership in Vanessa Rose stands in my mind as one of the bravest and most remarkable. I am so proud of the entire team at ICE for taking the enormous leap from being a founder-driven organization to being an organization that can stand boldly on its own feet. I have deep faith in Vanessa to lead ICE into the next era, and to do it with the passionate collaborative artistic spirit that has fueled everything this group has accomplished to date.”

In addition to Vanessa Rose’s work behind the scenes on behalf of music and musicians, she is also a violinist and has performed with the New Jersey Symphony Orchestra and the Harrisburg Symphony as well as at the Spoleto Festivals (Italy and USA). She comes from a musical family and attended the Eastman School of Music, Mannes College of Music, and the Royal Conservatory in The Hague, The Netherlands. Rose lives in Riverdale, NY with her musician husband, Patrick Pridemore, and their two children.