I Hear the Gongs Singing—Percussive Adventures in Chicago

Tatsuya Nakatani is the very picture of dedication to his music and the carefully constructed sound world that he fully inhabits. His stage incorporates an expansive collection of gongs, mallets, bows, and drums that he loads and unloads from the van he drives, touring for months at a time in order to bring his immersive percussive sound to an assortment of ears in towns and cities across the country.

Tatsuya Nakatani is the very picture of dedication to his music and the carefully constructed sound world that he fully inhabits.  His stage incorporates an expansive collection of gongs, mallets, bows, and drums that he loads and unloads from the van he drives, touring for months at a time in order to bring his immersive percussive sound to an assortment of ears in towns and cities across the country.  He builds his own bows and engineers his own metal frames.  He sells CDs and vinyl records to support his singular approach to a music rich in standing waves and complex overtones shaped by his finely honed intuition for his improvisations.  His rapport with the audience and other musicians is understated and disarmingly humble.  This is in stark contrast to the focused intensity and disciplined technique that goes into his transformative performances. 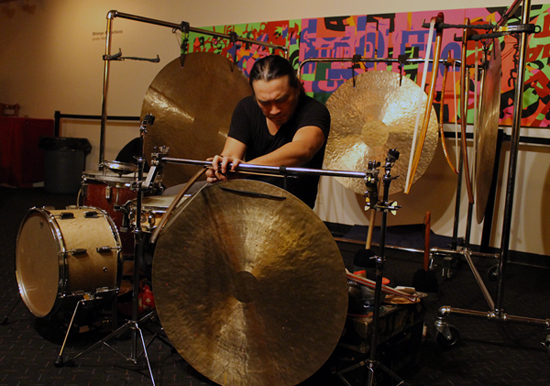 A solo, improvised set of music from Tatsuya Nakatani emerges as an act of intense, creative ritual.  His language of bowed gongs and scraped snare heads focuses on percussion as a source for drone textures that ripple with complex energy.  The music erupts and subsides with an intense focus on the intersection of disciplined technique and raw sonic energy.

Nakatani has been looking for practical ways to expand his solo percussive world.  To this end he has taken an interest in workshopping pieces for what he calls the Nakatani Gong Orchestra.  The membership of the orchestra is made up of people local to wherever he happens to be performing, which he finds gives it a dramatically different character every night.  His preference is to work with non-musicians for a brief period–just two to three hours–before staging a performance.  This is just enough time to cover the basic techniques of striking and bowing his large gongs and to teach the performers a set of hand gestures that communicate his intentions as the conductor.  Conceptualized as an extension of his own appendages, Nakatani uses the ensemble to realize the sound of a multi-limbed version of himself.  Working with performers without previous musical training allows him to better shape a sound that utilizes his own exceptional restraint without having to also manage the personalities and impulses of trained musicians. 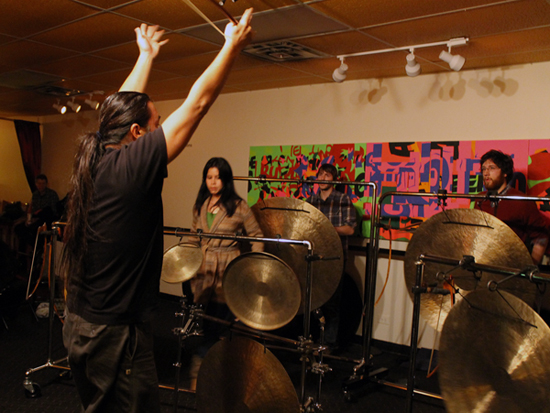 The opening set for his recent stop at Chicago’s Elastic Arts began with a Gong Orchestra performance.  The wide dynamic range of six performers bowing and striking gongs of various sizes was startling, although much of this music was not particularly loud.  The relatively small space at Elastic Arts could easily be consumed by the vibrations of so many large gongs.  Tatsuya Nakatani’s aesthetic draws from a sense of restraint that allows the complexities of sustained gong tones to fill the space without resorting to volume.  Nakatani conducted crescendos and decrescendos that washed in like ocean waves.  At other times he would shape a sustained, quiet textures that served as a bed for his own playing at the front of the gong orchestra.  The formal construction of his conducted improvisation was remarkably transparent as he sculpted an elaborate drone that allowed the wealth of anharmonic frequencies to dance in the air between gongs and eardrums.  Much of the performance featured Nakatani leading through conduction before reaching for his own bows and mallets to contribute his layer of sound.  The vibrations within the room were filled with nuances that shifted audibly with even the slightest movement of one’s head.  It gave the air a feeling of density, like being submerged within a rich liquid of sound.

The second set of the evening featured a solo performance with Nakatani playing a drum kit, several gongs, and handheld percussion. Nakatani’s dedication to his sonic language is readily apparent in the meditative, near trance-like state that he goes into once the music begins. The sense of invocation that flowed from the way Nakatani regarded his handcrafted instruments gave rise to a spiritual quality that was reinforced by his sense of submission to the improvisational space. It was a drum solo realized as a continuous drone as Nakatani explored a range of percussive frictions and air pressure applied to the membranes of his drums through a technique of blowing through the hole of a cymbal held flat along the surface of the snare drum.  These were combined with the sonic richness of his bowed gongs, which demonstrated his ability to react and truly control the contours of the sound through subtle changes in bow speed and angle.

Later that same week, Third Coast Percussion offered up a performance of new music as part of the Sunday Salon Series at the Chicago Cultural Center.  The quartet of Owen Clayton Condon, Robert Dillon, Peter Martin, and David Skidmore presented a polished set of composed music that explored different aspects of ensemble drumming.

A tight rendition of Mallet Quartet by Steve Reich opened the afternoon concert.  It is a relatively recent work that builds upon the familiar harmonic progressions and fast-slow-fast form that are such an identifiable part of Reich’s sound.  The use of two five-octave marimbas opened up a wider harmonic range of which Reich takes full advantage, particularly in the slow section.  The use of amplification combined with the live acoustics of Preston Hall made for a loud excursion into the composer’s sonic language.

The next piece on the program was Credo in US composed in 1942 by John Cage.  It is an early collage work that plays up Cage’s whimsical side, combining a mash-up of popular musical styles from that era along with the use of radio as an instrument, the live broadcasts adding various popular musical styles from this era into the mix as well.  In addition to the radio, Credo in US is scored for piano, muted gongs, tom toms, tin cans, electric buzzer, plus a phonograph—though an iPhone served that role here as a 21st century technological substitution that was well within the spirit and sonic purpose of its 20th century counterpart.  John Cage’s music soars when performed with a balance of reverence and enthusiasm, and the interpretation of this work by Third Coast Percussion—the tin cans and other physical materials tastefully selected for their timbral qualities—was an incredible success. 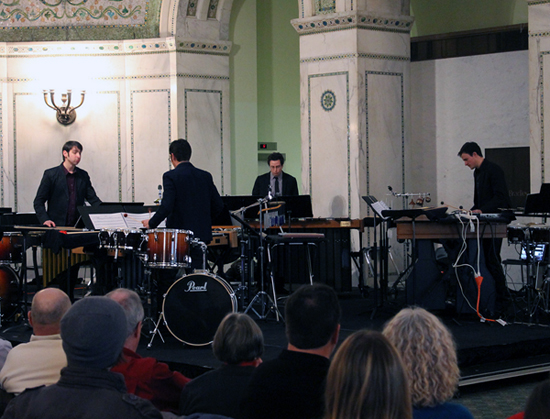 Third Coast Percussion performing Common Patterns in Uncommon Time (2011) by David Skidmore.
The second half of the concert consisted of Common Patterns in Uncommon Time by Third Coast percussionist David Skidmore.  Inspired by the architecture of Frank Lloyd Wright, the piece begins with the mallet instruments entering seamlessly from specially designed pre-recorded intermission music. The pulsating sound suggests Reich, but with a decidedly different harmonic sensibility.  The music then breaks abruptly from the mallet instruments and moves into more expanded percussive timbres.  Each movement exploring subsets of metals, drum kits, woods, or membrane instruments over a span of time that systematically exhausted a stage filled with instruments.  The abrupt timbral transitions between movements emerge as a signature quality of the piece.  The use of electric fan-driven wind chimes over a soft texture of mallet instruments was particularly striking. It served as a fitting contrast to the loud beats pounded out on multiple drum kits just before that section.   The piece concluded with two of the performers moving into the audience while playing clay pots as an effective nod toward the sense of space that marks Frank Lloyd Wright’s creations.  It was music that built out nicely from the iconic 20th century composers featured during the first half of the program.