The unlikely collisions between the two musical cultures I inhabit bring up so many questions for me about musical perception: What do people from one musical culture hear in the music of another culture? How much of our aesthetic association with specific music comes from repetition and reinforcement within our musical culture, and how much is simply hard-wired into us as humans? 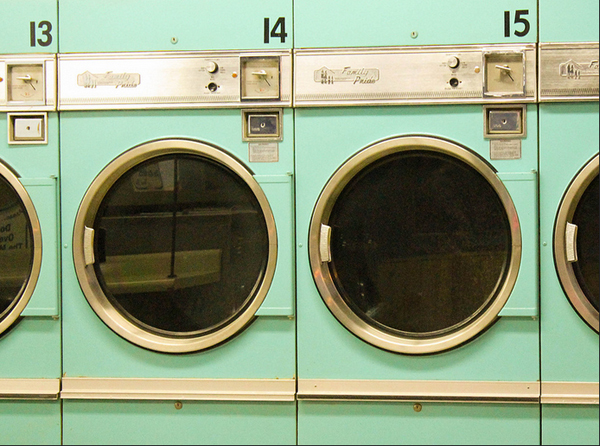 My apartment in India had three balconies, one for each bedroom in the house. The back balcony, which could only be entered through a single door from its accompanying bedroom, housed the washing machine we all used. When I washed my clothes, I would quickly shuffle through my roommate’s bedroom out to the balcony, mindful not to linger, and I would return when I was absolutely sure the cycle was over so as not to continually disturb her. One day, many months later, my roommate offhandedly asked me, “Don’t you love that little song the washing machine plays when it’s done?” I had no idea what she was talking about—I had never been there to hear it. So the next time the washing machine stopped, we listened.

To my great astonishment, the song was “Die Forelle.” On our balcony, in South Delhi, there was a single machine that both played the music of Franz Schubert and had a special setting for washing saris. I was completely flabbergasted. How did this Indian appliance company decide to use an iconic German art song to signal the end of a spin cycle on its washing machines?


Incidents like this fascinate me endlessly. These unlikely collisions between the two musical cultures I inhabit bring up so many questions for me about musical perception: What do people from one musical culture hear in the music of another culture? What makes a particular piece of music resonate with someone who is not familiar with its tradition or context? What features of the music are most prominent to someone from another musical culture, and how different are those from the features that are prominent to someone within the musical culture? More broadly, how much of our aesthetic association with specific music comes from repetition and reinforcement within our musical culture, and how much is simply hard-wired into us as humans? While I certainly don’t have answers to these questions, I am deeply curious about them.

There have definitely been multiple attempts, both in Hindustani and Western musical culture, to match musical gestures with codified aesthetic profiles. The Doctrine of Affections (Affektenlehre), an early baroque theory most clearly described by musicologist Johann Mattheson (1681-1764), uses ancient rhetorical gestures as a basis for portraying specific emotions and moods in Baroque music. Wagner’s leitmotifs also often aim to codify and shape the sonic experience by creating a specific association with an extra-musical element, whether a character or a more abstract mood, a technique that has since been appropriated in Western film music. In Hindustani music, the theory of rasa, which originates from ancient Indian dramatic practices, outlines nine emotional states which serve as the basis for Indian musical aesthetics. Additionally, the time theory of raag dictates a specific time of day each raag can suitably be performed, determined by the accidentals (in Western terms) of the notes it contains. However, none of these theories can fully circumscribe aesthetic practice in the music, nor are they appropriated ubiquitously, even during a specific time period or location; their scope is limited. To this day, neither Hindustani nor Western art music has a comprehensive aesthetic doctrine that underpins its music entirely.

Even if there are no explicit aesthetic rules that dictate exact musical choices in either culture, it is undeniable that each music still has distinctive ways of painting a particular aesthetic picture which is instantly recognizable to people within that cultural context. While it is fascinating to examine what those methods are within each musical culture, it has been even more fascinating, for me, to compare aesthetic depictions inter-culturally. There are certainly techniques that have similar aesthetic effects across cultures. (I know exactly what you’re wondering, so I will say that, to the best of my knowledge, raags with a lowered 3rd are generally considered more melancholy than raags with a natural 3rd [2].) And there are certainly subjects that are portrayed similarly in both cultures. But even more telling are the points where the aesthetic portrayals of a subject are vastly divergent.
One of the most striking examples of aesthetic divergence I’ve found is in the portrayal of the season of spring. For most Western musicians, the very mention of the word might call up Vivaldi’s “Spring” from The Four Seasons, or Beethoven’s Spring Sonata—the ambient sounds of chirping birds and babbling brooks, portrayed onomatopoeically through music, have a long and established association with the season. (Even Stravinsky’s Rite of Spring, which has a very different aesthetic profile, could be considered to be more about the Rite than about the Spring.)

In Hindustani music, the hearkening of spring is portrayed by Raag Basant. The word basant (buh-SUNTH) literally means “spring” in Hindi, and it is one of the main raags that represents the season. Take a listen to how Basant sounds:


Below is the aroha/avaroha (ascent and descent) of the raag [1]. It ascends rapidly, beginning on a #4, and proceeding to a b6 and a high b2 before sinking into the tonic note. The descent is much windier than that ascent, and only after reaching the lower tonic does it reach back up to the natural 4th for a fleeting moment before returning to the #4, which precipitates the final descent. 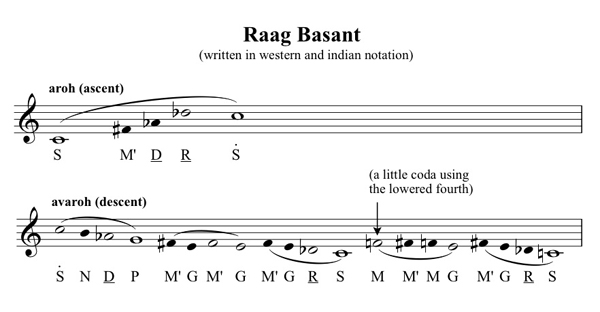 The first time I heard the raag, I was completely confused by its aesthetic. It didn’t align with any part of my conception of the typical Western portrayal of spring. I just couldn’t connect the two perceptions of the same phenomenon in my mind. While the Western perception of spring is light and airy, the Hindustani perception felt dark and sinewy. If the Western spring was painted in pastels, the Hindustani spring was painted in cool, bold colors. Are these aesthetic profiles addressing two different views on the same season, or is the perception and, consequently, the musical representation of the same natural phenomenon just completely different in each culture? While years of pondering this question have certainly led me to formulate my own theories, I still have more questions than I have answers.

Like most people who speak multiple languages, I often find that the way I most want to express a thought uses words that are in a different language than the one I’m currently speaking. I feel this musically, too. This is why I love moments of cultural collision, like the incident with the washing machine. One little sliver of a different culture can be embedded seamlessly in the fabric of another. But that little sliver can also be a window, slightly ajar, begging to be opened. How I wish the Indian women washing saris on their balconies knew that they were listening to the digitized version of a beautiful Schubert art song. I wish people who sing the Bollywood song “Itna na Mujhse Tu Pyaar Badha” knew the tune at its inception, as the melody to Mozart’s 40th Symphony. (See below, and lest you think it’s just a melodic coincidence, listen until 0:49—besides the final augmented 6th, it’s all there!)


In my own music, I aim to leave the windows cracked open in the other direction by embedding little snippets I love from the raags of Hindustani music, particular phrases that I find strikingly beautiful and unique. While those phrases certainly can’t capture the entire breadth and depth of the culture, I hope that they will give Western audiences a little taste of the musical culture and will leave them wanting to explore it further.

*
1. This is as close to an ascending and descending scale as a raag gets.
2. There are, however, raags that have both lowered and raised 3rds, which I think brings about a whole other aesthetic in Hindustani music. I would be curious to see how these raags are felt in an exclusively Western context.
3. This last phrase, “repertoire of ways of knowing” is not my own. It was coined by Dr. Peter Rojcewicz, who specializes in holistic education and was a humanities professor at Juilliard when I studied there in the early 2000s.