The Hammond Organ became an immediate success when it hit the market in April 1935 and had a major impact on the soundscape of both popular and religious musical life in the U.S. However, advertising that pitted the instrument against pipe organs stoked outrage among a small but well-organized community of pipe organ performers, designers, and manufacturers. A remarkable legal battle ensued…

The Hammond Organ was the first electronic musical instrument to become commercially successful. Just two years after it went on sale in 1935, major radio stations and Hollywood studios, hundreds of individuals, and over 2,500 churches had purchased a Hammond. The instrument had a major impact on the soundscape of both popular and religious musical life in the U.S., but it has been largely ignored by electronic music historians. Like the Telharmonium and theremin, whose own popular pasts are not widely known, the Hammond’s early history has much to teach us about how American audiences first encountered and understood electronic musical sound.

In fact, the Federal Trade Commission held an entire hearing in 1937 to evaluate the Hammond’s sonority. The Commission sought to determine whether a series of advertising claims about the Hammond’s timbre were “deceptive, misleading and false.” Though many of the hearing’s participants believed their testimony would go down in history as an important reckoning of what constituted “real” and “good” musical sound, the affair is largely forgotten today. What the hearing does offer is an unusually detailed record of contemporaneous arguments over the quality and value of a new electronic sound.

Religious institutions made up the largest share of Hammond buyers, accounting for half of all sales in the 1930s. Advertisements targeted churches on a budget, highlighting practical concerns like the Hammond’s low cost and ease of installation. Ads claimed that all could now own an instrument that produced “fine” organ music, with tones comparable to that of a “concert” or “cathedral” organ. At $1,250, a standard Hammond installation was roughly double the price of a new Chevrolet sedan in 1935, but markedly less than all but the most modest pipe organ installations. 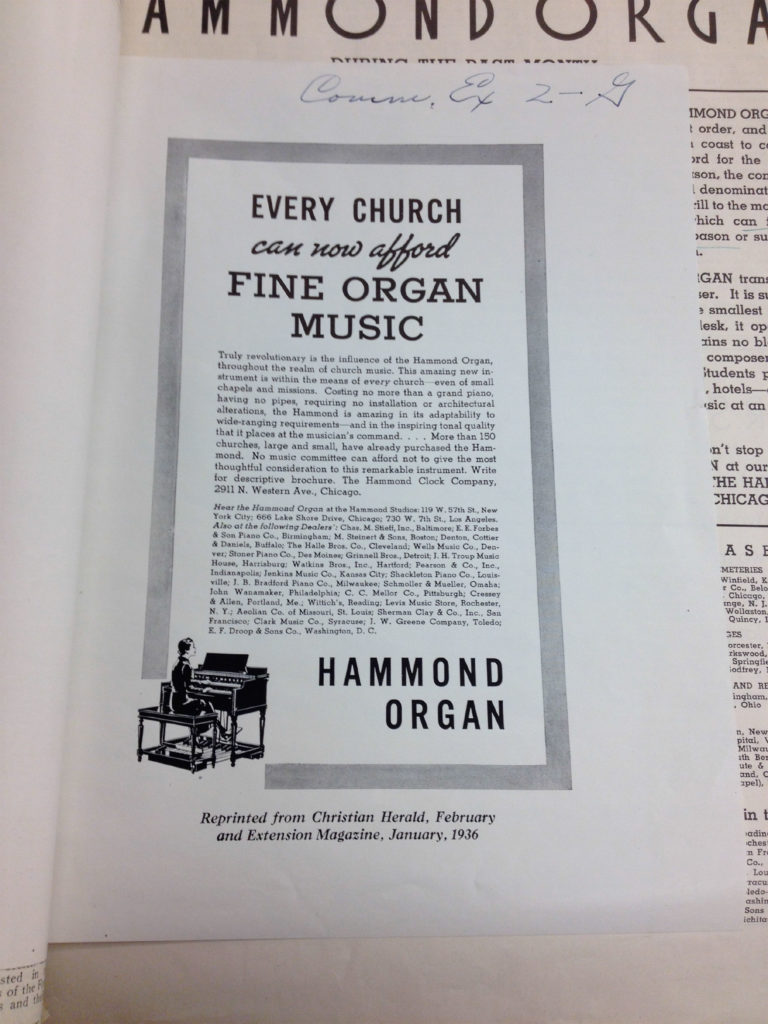 Religious organizations of all types bought Hammonds, from mainstream American Protestants to Catholics, as well as newer denominations like Evangelical churches. In general, though, congregations owning a Hammond in the 1930s tended to be smaller, poorer, and more rural than those that possessed a pipe organ. Many Hammond buyers had apparently not been in the market for an organ at all until the Hammond became available.

Advertising that pitted the Hammond against pipe organs stoked outrage among a small but well-organized community of pipe organ performers, designers, and manufacturers. Many of the community’s most prominent members registered their displeasure in trade journals like The American Organist. In a January 1936 survey printed in the journal, renowned organ designer Emerson Richards derided the Hammond’s sound as “hollow, dry, and dead.” In his response to the same survey, Chicago pipe organist and historian William Barnes declared that the Hammond would “not bear direct comparison with the tone of any natural musical instrument.”

Barnes and Richards spoke on behalf of an industry that had entered the Great Depression already in turmoil. Organ business boomed during the silent film era, when nearly every existing pipe organ manufacturer and many new enterprises rushed to meet demand for theater organs, but talkies decimated that market by the early 1930s. When the Hammond arrived on the scene, the pipe organ industry was reeling. Although no surviving evidence suggests that the Hammond made a measurable impact on pipe organ sales, men like Barnes and Richards quickly adopted the new electronic instrument as a convenient scapegoat for the industry’s ills.

The Federal Trade Commission Gets Involved

Eight months after the Hammond went on sale, Emerson Richards petitioned the Federal Trade Commission to act against the Hammond Clock Company. In 1936 the Commission issued a formal complaint accusing the company of advertising claims that “unfairly diverted” trade away from its pipe organ competitors. The claims at issue ranged from the concrete (the Hammond’s price point) to the nebulous (its suitability for the performance of “great works”), but the complaint and resultant hearing centered around one question: did this new electronic instrument sound “as good as” a pipe organ?

To find an answer, defense and prosecution attorneys assembled a gallery of witnesses—pipe organ experts, performers, Hammond employees, even a physicist who traveled from the University of Texas to Chicago for the hearing. Both Richards and Barnes (quoted above) acted as consultants for the Commission’s prosecutor and testified as expert witnesses. Together with the prosecuting attorney, the men performed multiple tests and demonstrations. In one challenge, “expert” human listeners tried to differentiate between a Hammond and a $75,000 pipe organ in the University of Chicago’s Rockefeller Memorial Chapel. For another series of “machine” tests, physicist Dr. Charles Boner took electrical measurements of Hammond and pipe organ tones using an instrument of his own design that identified and measured the intensity of each of the various harmonics present in a single pitch. Boner then plotted the results in a series of 36 charts that visually depicted the amplitude of each harmonic present in a given tone. 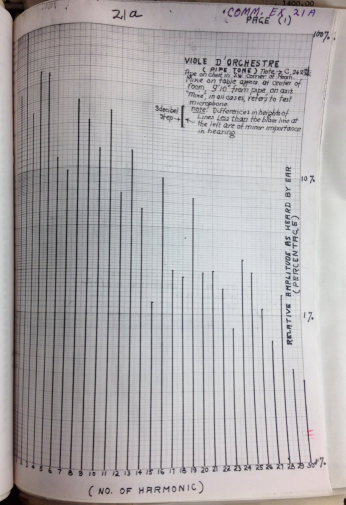 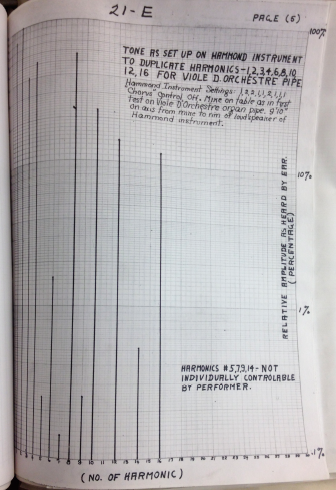 and the Hammond organ (right). In the Commission’s Exhibits, (Chicago History Museum).

Both sides attempted to spin the battery of test results in their favor. Their testimony was acrimonious and lengthy, and filled nearly three thousand pages, preserved in the Chicago History Museum and the National Archives. Evidence, correspondence, attorney’s briefs, and the like add another thousand pages to the record. Those on the side of the pipe organ interpreted the visual differences between pipe and Hammond organ tones in Boner’s charts as scientific proof of the superiority of pipe organ tones. Meanwhile, Laurens Hammond maintained the human ear could not detect the differences registered by Boner’s instrument. When Hammond held up the lackluster listening test results of expert listeners for a series of excerpts played by a Hammond employee, the prosecution accused them of deliberately registering the pipe organ used for the test to imitate the Hammond, rather than the other way around. 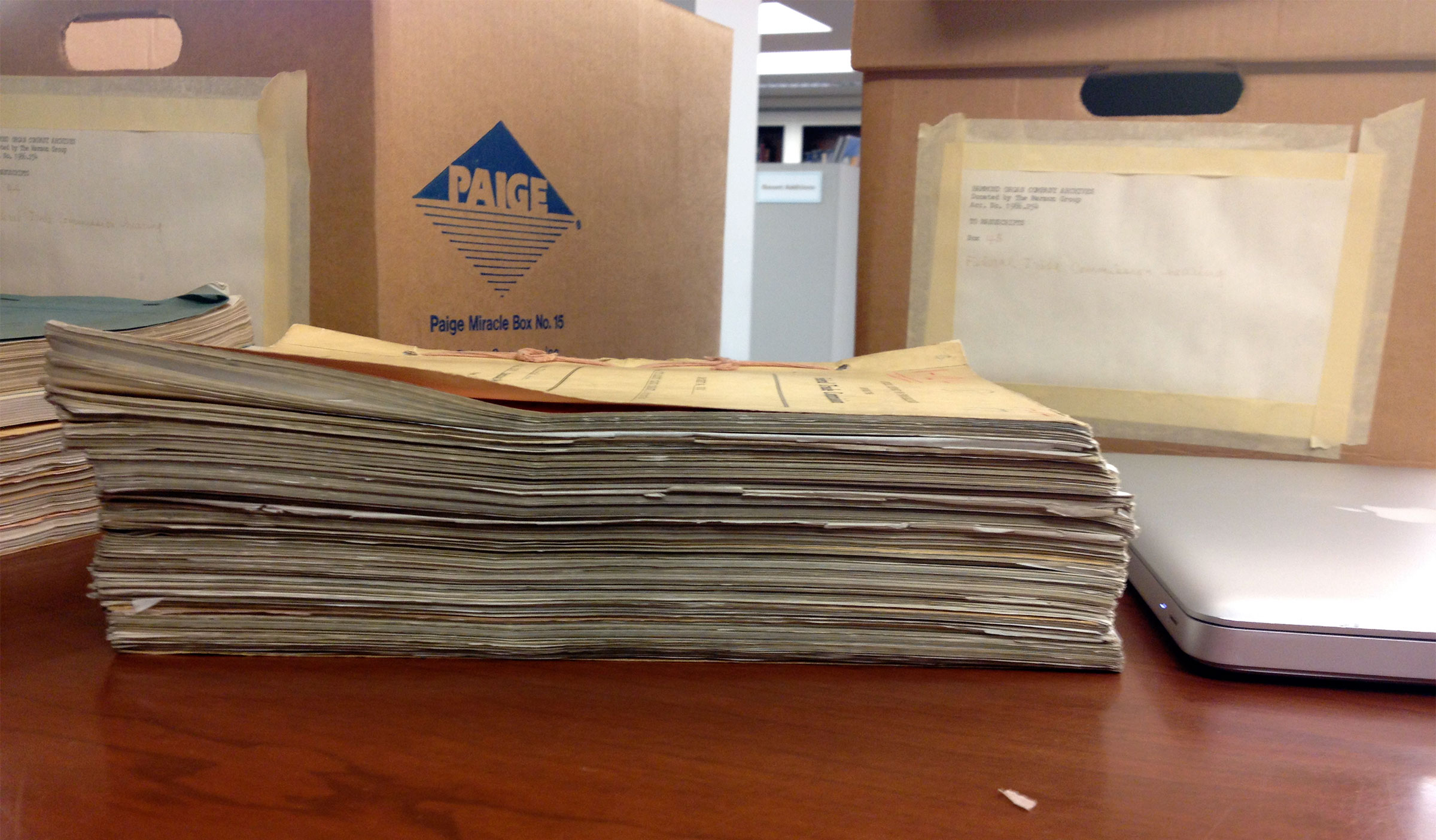 In hundreds of hours of testimony, not once did the Commission consider the experiences of performers and congregations who used the Hammond Organ for worship. When the Hammond defense attempted to submit statements of support from church organists across the country, the Commission rejected them on the grounds that “testimonials are not good evidence.”

The hearing’s final set of demonstrations starkly illustrate this exclusivity. The Commission traveled to Atlantic City, New Jersey, to compare two organs: a famous pipe organ at Boardwalk Hall (designed by Emerson Richards himself) and the only nearby Hammond Organ, located at the African-American St. Augustine’s Episcopal Church. At St. Augustine’s, Richards played a series of scales and chords using the preset sounds of the Hammond Organ; he repeated this process, playing registrations that corresponded to the Hammond’s preset timbres, on the organ at Boardwalk Hall. Later, Richards and the famous organist Charles Courbin, who was present for the demonstrations, testified on the differences they perceived between the organs. 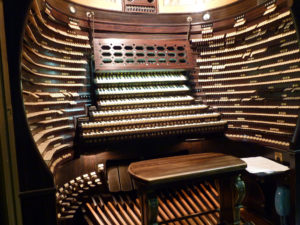 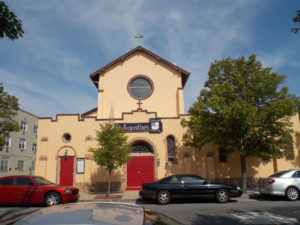 An unnamed figure appears in testimony, who Richards describes only as “a young colored man who sometimes plays the organ” at the church. For a brief moment, then, the hearing’s participants encountered a musician who actually played the Hammond for church services. Here was someone who might have provided testimony grounded in lived experience with the new instrument. But the lived musical life and opinions of this unidentified organist was irrelevant to the men running the hearing. He is mentioned just once in the recorded testimony. He does not speak or act. His body registered, briefly, in the official record, but his opinions—and his name—did not.

Though this organist and his musical practices failed to register as matters of concern, his presence in the record is silent testimony to the Hammond’s existence and impact outside the context of the Commission’s hearing. Historian Ashon Crawley, who is currently at work on a book on the role of the Hammond in Black Pentecostal churches, notes that the instrument’s sound was taken up as the sound of the Black Pentecostal movement itself where it was heard as a “human-like” voice. Crawley sketches an understanding of the Hammond’s sound in the Black Pentecostal church that is rich with religious and social meaning, an understanding far more complex and profound than the white men involved in the Commission’s Hammond hearing were able to imagine.

In July of 1938, when five Commissioners met to rule on the hearing, they agreed with the prosecution and its witnesses on nearly all points. The Commissioners ordered Hammond to cease making a number of claims, including that the Hammond could produce sonorities equivalent to a pipe organ’s, that it could “properly” render “the great works of classical organ literature,” and that it was comparable to a “$10,000 pipe organ.”

And yet, after hundreds of hours of testimony, tests, and demonstrations, the decision mattered little. Both sides claimed victory, but the hearing appeared to have no appreciable impact on either. Indeed, the Hammond seemed to expand rather than invade the pipe organ market. Until World War II, when both the Hammond Company and the pipe organ industry converted to war-time operations, Hammonds continued to sell at a brisk pace. And after a low point in 1935, a slow recovery began in the pipe organ industry, with sales and the number of pipe organ firms on the rise by the end of the decade.

Defenders of the pipe organ failed to grasp that not every church wanted or needed a pipe organ, and that the Hammond was actually well suited to many religious musical practices. We can only imagine what other kinds of testimony would exist had the Commission considered the experiences and opinions of the congregations who worshiped with a Hammond. The exclusivity was the point, though. It was the Hammond’s marketing intrusion into elite pipe organ spaces and practices that precipitated the complaint, and that elite ground was the only one the pipe organ experts believed was worth defending.

The dismissal of supposed non-expert Hammond players and listeners in the Commission’s hearing mirrors electronic music history’s failure to register the histories of early electronic instruments. Because instruments like the theremin and the Hammond first circulated in spaces outside of elite compositional spheres, their performers, practices, and receptions seem to exist outside of history altogether. In both the Hammond’s hearing and mainstream electronic music history, the cordoning off of everyday and popular music experiences drastically narrows our understanding of how electronic musical sound became meaningful and why it matters.