Hatin' on Nickelback
NewMusicBox
Written By

Why so much vitriol directed at Nickelback, who are merely one of many easy targets in today’s commercially dominated, creatively deficient Top 40 wasteland? Patrick Carney’s original screed—which references people beginning to accept that what is most successful is rarely what is most exciting and unique—underscores a loss of faith in the very foundations of rock as subversive sexual and political expression.

In this month’s Rolling Stone cover story Black Keys drummer Patrick Carney took a dig at Canadian band Nickelback that has received no small amount of media attention. To wit: 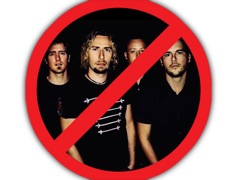 It’s not the most chivalrous (or least arrogant) way of making the point, which is part of what also makes Carney’s dis so resonant: it’s exactly the kind of thing that a lot of people really think, expressed pretty much just as it must have happened in conversations countless times before.

No stranger to high-profile bashings, Nickelback has endured so many slings and arrows that I’d almost feel sorry for them, if I didn’t think their music was so ass-bad. Recall that this past Thanksgiving nearly 40,000 Detroit rock fans signed a petition calling for Nickelback’s replacement as the half-time act during the nationally televised Lions/Packers game. Given that Detroit is the birthplace of an entire genre (Motown) as well as home to classic rock bands like the MC5, it’s easy to see what motivated music fans to sign the kind of petition they normally wouldn’t be bothered with. In the words of petition supporter Robert Jones, Nickelback “is not rock and roll, it’s a nasty hybrid of the worst manufactured music on the planet.”

Comments like the above are probably on the clean side compared to what many rock fans might say among friends. Why so much vitriol directed at Nickelback, who are merely one of many easy targets in today’s commercially dominated, creatively deficient Top 40 wasteland? Patrick Carney’s original screed—which references people beginning to accept that what is most successful is rarely what is most exciting and unique—underscores a loss of faith in the very foundations of rock as subversive sexual and political expression. Perhaps no other band so aptly embodies the kind of inauthentic, focus-grouped approach calculated to appeal to everyone, and this must be what sets Nickelback apart from the pack of equally unimaginative music.

As a writer who usually gets to choose what I write about, I don’t relish the idea of trashing anyone’s musical choices—I’d much rather devote that same time to something that excites me and ought to be shared with others. So I’m not writing this to heap yet more criticism on a group that has become a favorite punching bag among self-anointed “enlightened” listeners; I’m writing this to point out that what many listeners—and, I think, Patrick Carney—seem to disdain even more than Nickelback is the attitude that many, especially the most “enlightened” and savvy among listeners, have adopted in reaction to the kind of lame, devitalized music that Nickelback exemplifies—that since the most creative music is rarely the most successful, there must be something suspect with desiring success and wide acclaim.

There’s a sense in which Patrick Carney’s latest comment is simply egotistical bluster designed to justify his band’s own choices. All the same, his comments do strike me as indicating a problem that also has plagued the world of contemporary music: mainstream modes of dissemination have become so closed to innovation that many young artists (perhaps too hastily) deduce that there must be something wrong with wanting to reach a large segment of people. Not everyone wants to be the biggest band in the world, and I do think the indie spirit has done much good in shifting focus away from popularity to other aesthetic values. Yet at times this point of view can also lead to a retreat into niches and scenes, and unnatural disdain for the idea of wanting to reach a large audience seems to me just as unhealthy as an unnatural preoccupation with popularity as the only worthwhile indicator of artistic worth.