Great Moments (for me) in Chicago New Music History

Patricia Morehead arrived in Chicago in the fall of 1984 and went on to found and direct the CUBE Contemporary Chamber Ensemble for 20 years. In the midst of the Ear Taxi celebration, she takes a moment to reflect back on her history in the city and praise its evolving new music community.

When I arrived in Chicago in the fall of 1984, I registered as a returning scholar in composition at The University of Chicago. At that time, the first incarnation of New Music Chicago published a monthly newsletter mailed to its more than 300 members about activities in the Chicago area. By 1985 I found myself elected president of American Women Composers-Midwest and vice-president of New Music Chicago. While I was president of AWC-Midwest, we produced 18 events in one year, with the two most important events being concerts at Kennedy King College featuring six African American women composers—including a full orchestra performing Florence Price’s Symphony in E minor—and a concert of AWC-Midwest composers presented in Washington, D.C.

I have experienced score selections where the guys would throw out any score submitted by a female and I would sneak them back in.

During my New Music Chicago days, I remember having 600 scores in my living room submitted for their annual new music festival, out of which we had to choose some 30 scores to be performed over three days. One of my fondest memories of NMC days was having Ralph Shapey take charge of the selection committee. He was so full of energy and ran the fairest way of judging scores I have ever experienced. With other committees I have experienced score selections where the guys would throw out any score submitted by a female and I would sneak them back in again. Also with Shapey, we never conversed about the scores with each other as we listened. We each wrote down our own honest opinions and then compared notes after a group of several scores had been evaluated. We were almost always in agreement.

Another wonderful moment was the three-year existence of NEMO (New European Music Overseas) in the ’90s motivated by a young composer from Belgium while he and his wife lived in Chicago. Pierre Boulez became our honorary president. Peter Gena was artistic director; he is a composer from the Art Institute of Chicago and was organizer of New Music America on Navy Pier before I arrived in Chicago. I was the chair/work horse, so to speak. We had the financial support of the Goethe Institute as well as the French and Italian Consulates. Goethe Institute brought in some wonderful groups of musicians and composers, as did the Italian Cultural Institute and the French Consulate. We presented Chicago composers along side our European colleagues. It was a very exciting time and attracted much critical and audience attention for newly composed music on both sides of the Atlantic Ocean.

As founder of CUBE Contemporary Chamber Ensemble in the fall of 1987 with my husband Philip Morehead (and not affiliated with a university), I performed/organized more than 250 concerts. Janice Misurell-Mitchell and I were co-artistic directors of CUBE for the next 20 years. Christie Miller, a clarinetist, continued to run CUBE for the following five years. Our main focus was to feature the music of living Chicago composers, but we also included important composers from the United States, Europe, and beyond. John von Rhein, music critic for the Chicago Tribune, named Janice and me as Chicagoans of the Year for our creative/innovative programming, a wonderful and unexpected honor. Under Christie Miller’s leadership, we honored Gunther Schuller with a portrait concert at the Jazz Institute of Chicago, M. William Karlins at Pianoforte Chicago, and important opera composers Thea Musgrave at the Merit School of Music and William Bolcom at the Elizabeth Stein Gallery in the Chicago Fine Arts Building. We were very fortunate to have many performances on WFMT Live from Studio One and wonderful critical coverage from John von Rhein of the Tribune, Wynne Delacoma of the Sun-Times, and many reviews from Ted Shen in the Tribune and the Reader.

The AACM may be the most important musical development in Chicago.

The Association for the Advancement of Creative Musicians has existed for longer than all of us and I believe may be the most important musical development in Chicago of all, in my personal opinion. Fifty years ago, a group of South Side jazz musicians found themselves backed against a wall. Clubs were closing, radio stations were going pop, America’s musical interests were shifting elsewhere. If these Chicago jazz artists had given in to inevitably changing musical tastes, jazz might have devolved into a nostalgia bath or succumbed to the commercial excesses of the fusion era that followed. Instead, the Chicago musicians created the AACM, invented original musical languages, created intriguing new instruments, crafted novel ways of penning scores, and otherwise defied long-standing presumptions about how music was supposed to be made. And though they didn’t necessarily intend it, their breakthroughs opened the door to new ways of creating, staging, and perceiving music. Chicago and the rest of the musical planet will celebrate the AACM’s 50th throughout this year, a fitting response considering this organization’s global profile and impact.

I am so proud of Chicago and the many new music groups that have since come into being and are flourishing today. Ear Taxi is a wonderful festival event bringing together the many groups that make Chicago an amazing creative place to be. 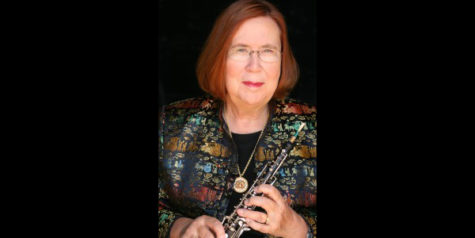 Patricia Morehead, composer, and oboist, is the founder and former artistic director of CUBE Contemporary Chamber Ensemble. She is past president of the International Alliance of Women in Music and American Women Composers Midwest. She made her Carnegie Recital Hall debut in 1977 and has concertized actively in Brazil, Canada, Europe, China and the USA. She recently retired from her positions on the adjunct faculty of Columbia College, Chicago, and Dominican University, River Forest, and she was for 17 years leader of the Composers Forum at the Merit School of Music.