When I heard that Daniel Felsenfeld, Lainie Fefferman, and Matt Marks were creating this conference, I wanted in even though I didn’t really like conferences–they make me think of barriers and give me the heebie jeebies. But take self-aggrandizement and/or alienation away, and you’re left with conversations and ideas being exchanged between people who simply want to create art and people who want to facilitate the making of that art.

[Ed. note: In the third installment of our series of posts by the founders of the New Music Gathering, Mary Kouyoumdjian explains how she went from being a reluctant participant in music conferences to helping design a new type of music convening. She hopes the same kind of positive engagement that attendees felt from the first NMG in San Francisco, which has continued online on various social media platforms, will take place at the next NMG in Baltimore next month. The previous posts in this series were by Daniel Felsenfeld and Matt Marks. To conclude next week, Lainie Fefferman will give us a sneak preview of what is on the agenda in Charm City.-FJO]

Many moons ago, say, some time in 2010, a youngish Mary attended a new music concert at New York’s (Le) Poisson Rouge for the first time. She enjoyed the music very much and, when the show finished, she applauded. Then she sat alone… somewhat awkwardly–okay, very awkwardly. With no one to talk to, she watched the rest of the audience socialize, reunite as if they had known each other for years prior, and chat up all of the amazing projects they were working on together. Why did she feel this social isolation? Well, if this were “Early 90’s Mary,” I’d say it was because of her clunky braces and frizzy hair, but this felt different. It was, if one could guess, because she had just moved back to New York after a string of years in L.A. working in the film industry, and she didn’t really know anyone in this “scene.” She didn’t feel a part of it. In fact, she felt far outside of this scene and generally unknown to her new music peers. And so, she paid her tab and returned home to the unconditional love of her canine roommate.

Now, I’m not sharing this story so you’ll feel sorry for my social failures. Most of us have felt like an outsider at some point in our lives, if not regularly. Rather, I’m sharing this to illustrate the opposite feeling and the opposite social environment I want people at New Music Gathering to experience. All of us at NMG desperately want people to connect with one another, to share their experiences, to build each other up, and (let’s embrace the inevitable mushiness here) to become friends. We don’t want cliques, and we don’t want people to feel alienated or alone with their art.

Being a composer is lonely enough. You’re locked in your little room for months at a time, with the curtains closed, trying to ignore the outside world for the sake of your work. For me, being a composer who lived in solitude felt unhealthy; I needed another role in my life that allowed me to interact with others artistically. When I heard that Daniel Felsenfeld, Lainie Fefferman, and Matt Marks were creating this conference, I wanted in. These individuals were creating a safe place for old and new friends to perform and share their thoughts on the production, promotion, support, and creation of new music. Their mission was one I believed in, and, as with all things I am proud to be associated with, I very actively pushed to be involved. The only problem: I didn’t really like conferences. 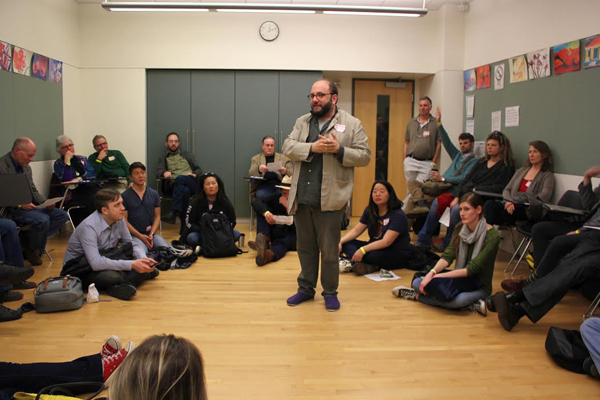 What are the things you imagine when you think about a conference? For me, it’s people in polished attire, hidden behind podiums, reading from papers placed directly in front of their faces. In other words, I think of barriers. I think of people on panels who feel the need to fluff up their résumés in the hope of appearing more accomplished than the person next to them, people who never tire of schmoozing even when at the snack table, and people who try and squeeze every drop of opportunity from those around them.  In other words, I think of pressure. Admittedly, this is an over-simplification of conferences, one that clearly leans toward my own phobias about them. That said, there isn’t anything necessarily wrong with the scenario described, and some of this behavior can prove to be quite successful.

Am I personally uncomfortable with these practices? Heck yeah, I am! They give me the heebie jeebies, and I feel icky when I put them into motion myself. Take this icky stuff away, and, in my opinion, you get good old-fashioned human-to-human connection on a very honest level. One of my favorite memories from last year’s NMG was a presentation by Aaron Siegel called “Getting Better? (How to Make Sure You Are).” It was a room of just 8-10 people, some strangers, all huddled close together sharing their innermost wants and desires to improve their art and themselves. Another favorite was Samantha Buker’s “The Art of the Possible: The Role of a Board and a Clear Vision,” where she approached the often-taboo topic of money and how one could seek it out. Take self-aggrandizement and/or alienation away, and you’re left with conversations and ideas being exchanged between people who simply want to create art and people who want to facilitate the making of that art. My new music wish: Let’s not compete, let’s create. 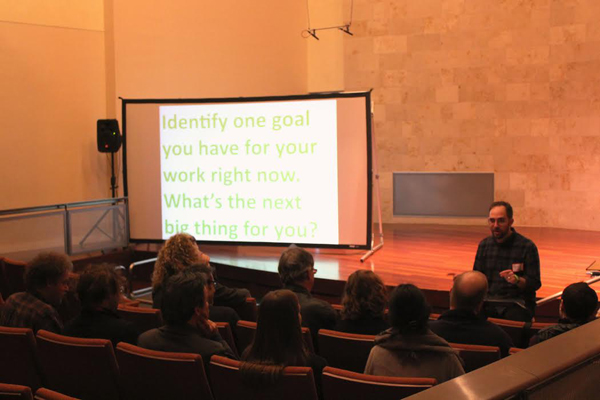 Aaron Siegel leads a discussion on “Getting Better? (How to Make Sure You Are)” at NMG2015

Let’s also learn. At last year’s NMG at the San Francisco Conservatory of Music, one of the attendees in the “Women in New Music” roundtable shared a thought that stuck with me: “If you don’t know any music by women composers, and this is why you don’t program music by women composers, it is your responsibility to educate yourself and actively seek out music by women composers.” As a woman, my response to this was clearly “Rock on!” and now that this thought has sunk in even further, I realize that this methodology applies to my limited knowledge of music happening outside of New York City. It’s my responsibility to educate myself about the music happening outside my little bubble in Brooklyn, and it’s my joy to share these findings with others through New Music Gathering. Looking towards Baltimore in 2016, my heart was over-flowing after going through all of the applications filled with Baltimore locals, Peabody Institute students, and artists scattered throughout the U.S. (and a few international applicants too)!

There’s so much excitement about the music being made in Baltimore recently and the music coming from current students and alums of Peabody. It’s inspiring to see Maryland groups like Lunar Ensemble, Sonar new music ensemble, Great Noise Ensemble, and LuSo Percussion being represented this year and to learn about what these artists are contributing to their respective cities. It’s great to see the NMG community already engaging with each other on Facebook and Twitter, pre-pow-wowing presentation topics, doing field research together, plugging each other’s shows, and even offering to organize carpools and couchsharing for the event. It feels like community, it feels like friendship, and suddenly the old barriers that mark who’s in or out feel like they’re fading away. 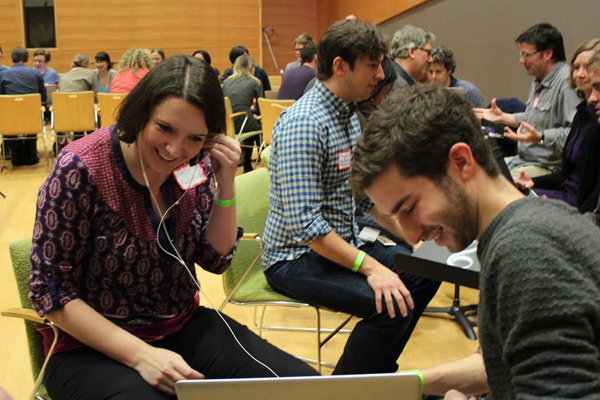