ToneCraft—a musical toolkit that takes advantage of Web Audio API as a workspace for free composition—provides a fantastic metaphor for introducing unwitting normal people to the zany world of composing, albeit one that is far too limited for anything beyond some rudimentary dabbling. 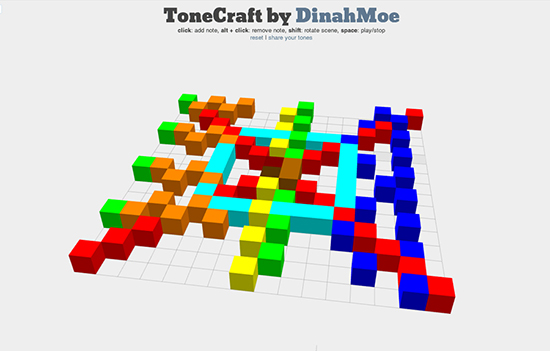 Human beings only come to grasp new concepts by relating them to something they already know; our predominant way of understanding the world—and expressing ourselves—is via metaphor. Our reliance on metaphor makes possible the absorption and mastery of many new things, but there is always a point at which the metaphor breaks down and the new idea must emerge in its own right.

ToneCraft—a musical toolkit that takes advantage of Web Audio API as a workspace for free composition—provides a fantastic metaphor for introducing unwitting normal people to the zany world of composing, albeit one that is far too limited for anything beyond some rudimentary dabbling. Professional musicians can expect very little from ToneCraft other than a few moments of amusement; but for people who have never tried composing and possibly cannot read traditional music notation, ToneCraft becomes more than an entertaining plaything: it set up one of the most effective metaphors for exploring various types of aural experiences through spatial and visual relationships.

Swedish developer DinahMoe created a three-dimensional grid environment ripped straight from an earlier Swedish game called MineCraft, with various elements corresponding to musical tones. Colors suggest different instruments or timbres; the X- and Y-axes represent pitch and duration, respectively; and the vertical Z-axis allows users to layer sounds to create rich contrapuntal textures. This is a lot of fun and a great way to get budding composers—especially kids—thinking about the actual parameters of sound rather than the frequently unhelpful stylistic dictates that too often serve as the entry point into music composition.

Beyond this fresh, sandbox-style approach to toying with sound, unfortunately, ToneCraft offers little to sustain attention; greenhorn composers who have gotten bit by the bug will likely move on to another type of technology—be it sequencer, microphone, or one of those endangered notation programs—for any real in-depth explorations. It’s fun to make random objects, then “play” them back to hear what they sound like—but it’s exactly here where the metaphor breaks down as the user progresses, because as the “compositions” get more sophisticated, the results become gray and jumbled, the software failing to produce distinct expressions of more complex visual input. 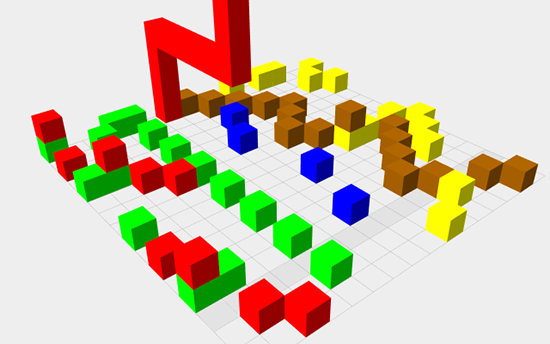 Still, ToneCraft is a remarkable experiment (or “lab” as the developer’s site indicates), not intended for long-term use but created to provoke an immediate spark: here are the most basic elements of sound design, made as intelligible and accessible as a set of childhood building blocks. For this achievement alone, ToneCraft is one of the very few musical games with any appeal for those folk who are intimidated by the idea of music’s conceptual side—and unlike the mainstream console games Guitar Hero and Rock Band, this one is largely user-directed: a very small sandbox that for a few brief hours makes the very hyped and mystified process of composing seem like child’s play.