When the phone rang four years ago, I was asked if I would be interested in moving to Bangkok, Thailand to teach music theory and composition.  I said yes. It was one of those moments in life when one embraces the possibilities, even without knowing what will happen.  I can admit that, due to my patchy-at-best understanding of global geography, it was not too long after the phone call ended that I decided to look again, this time more carefully, at my map of the world to find out where exactly I was going before a celebratory trip to the bookstore.  Even though I did not know precisely where I was going, I had to honor the important rule of my life: follow the music.

Following the music had been the story of my life up to that point. Years before the phone rang, in the senior year of my undergraduate studies, this rule helped guide me through a decision to move my concentration away from voice (an area that had previously defined my musicianship) towards composition. While I was transitioning towards becoming a composer, it was tremendously unclear what would happen. I had invested so much time and attention into singing that composition really came to me as a surprise. Thankfully, I had a very supportive group of teachers in both voice and composition who encouraged and inspired the process.  Although it was difficult at the time, this change towards making music in a new-to-me way led to being able to learn more. In order to follow the music, I have moved more times than I can count—along a general path from my home in Texas through Michigan and then on to Bangkok. Through so many changes, music has always been what has held it all together.

Ironically, the steadiness and predictability I sought became available to me only through a great dislocation.

Before the phone call, I had been considering two things. One was the potential to enrich my composing by pursuing new experiences, and the other was my desire to teach and interact with musicians.  After finishing my degrees, I had been teaching private lessons and working a day job while I composed in my free time, but I found that much of my time was actually being used in the drives commuting back and forth from one area to another.  I enjoyed having writing time and teaching students, but did find the day job difficult.  The chance to work abroad would allow me to consolidate my work into one place. I liked the steadiness of the idea. I did not know at that point how long I would be interested in living there or how long I would even be able to last overseas, but a steady life was something I wanted for myself. Ironically, the steadiness and predictability I sought became available to me only through a great dislocation. As I packed my bags, I did feel scared to be leaving but was more excited about the possibilities that might come as a result. 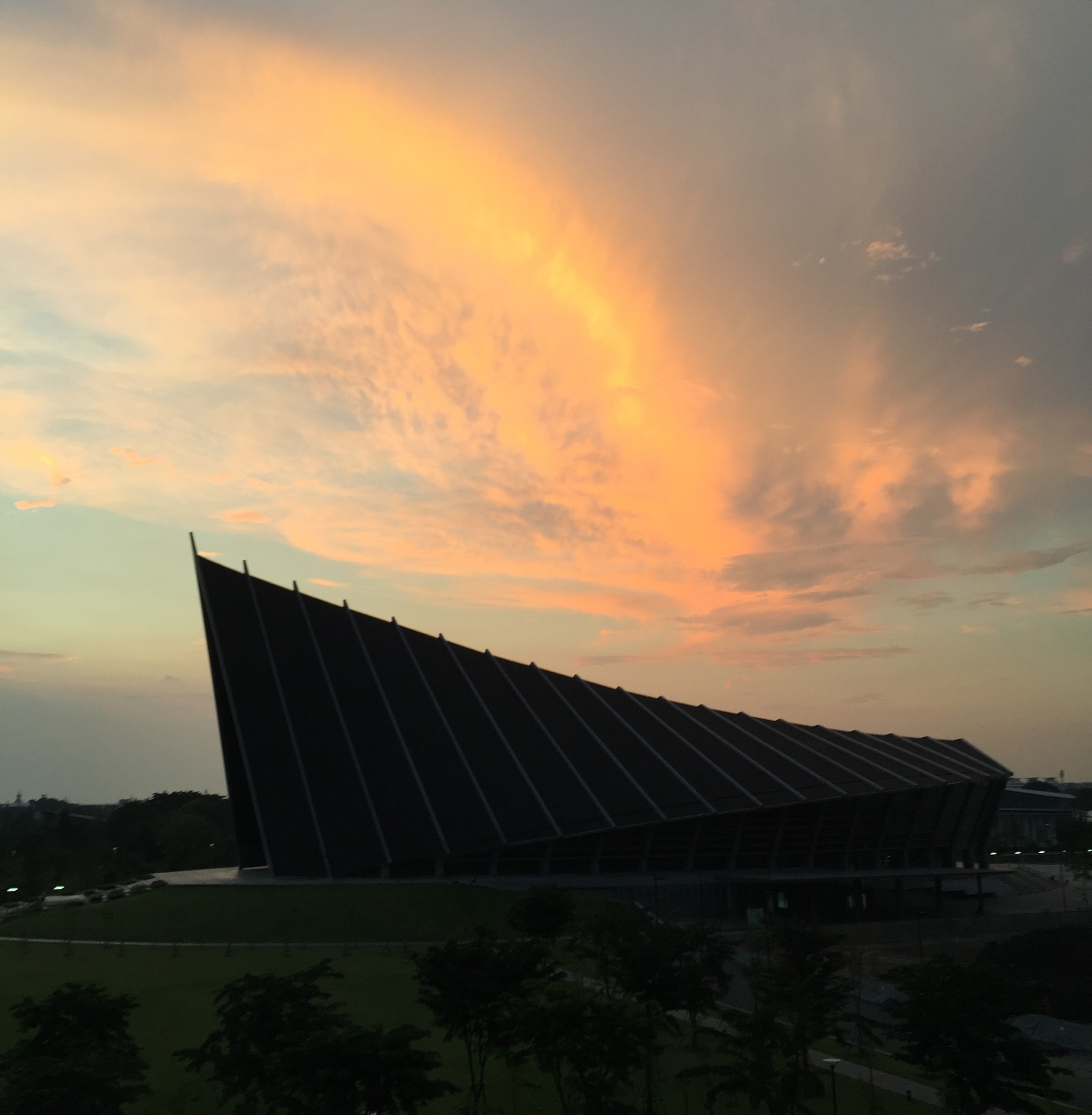 With a time zone thirteen hours ahead of my home, the sprawling capital city of Thailand is strategically located on what, geographically and culturally, seems to be the other side of the Earth! Bangkok is an intense collage of colors, sights, and sounds. Downtown the whole city buzzes, temples glitter with mirrored tiles (even in the moonlight!), taxis and tuk-tuks line the street beside outdoor markets and cranes loom overhead. Food stalls are tightly packed with families and friends enjoying fresh meals. Boats chug and swoop along the Chao Praya River, the city’s oldest expressway. I had travelled quite frequently prior to moving to Thailand but had never stayed anywhere internationally longer than a week or two. Life as an expatriate is a completely different experience than just passing through as a tourist. Unlike a temporary visit, successfully living abroad requires a gradual and pragmatic approach towards adaptation. By investing my time and musicianship here, Bangkok has become my home.

Nevertheless, navigating this new terrain demanded focus and dedication. When I arrived, I did not even know how to greet people properly. During the course of my daily walks those first days, I waved and smiled back at every smile I received, something that I only know now was completely inappropriate. (My well-intended waves looked alarming. The smile was okay, though.) In the first weeks, the priorities were very basic: find a place to live, get a telephone, get a handle on what is happening with Wi-Fi, successfully get a taxi, try to go somewhere specific on purpose, see what happens. In the beginning, it took a great deal of patience to observe what needed to be learned and to follow through. Each day required a high level of attention and intention. Research done beforehand had warned of the possibilities of initially experiencing culture shock; this can happen when days (weeks and months) go by without the personal ability to complete a task with accuracy. I did not want this to happen to me.

Soon enough I met with other international colleagues at the College of Music at Mahidol University (where I would soon begin working) and listened carefully to a much-needed flood of instructions regarding the skills I would need to learn. The learning curve was quite steep at first.  When you are moving to a new country, it can be difficult to anticipate some of the side effects that can result from needing to re-learn how to do what in the past have been simple tasks. That said, gradually moving towards a more complete set of geographic and cultural navigation skills is very important. This process has been very revealing for me and is one of my favorite aspects of deciding to come here—I’m so glad I did. The joy that living here brings is something I had never experienced before either. Even though I was quick to pick up the hand technique for a proper wai greeting that normally accompanies a verbal hello, over these past years I’ve still been continuing to develop my wai, making sure to be mindful that my elbows don’t stick out so much. 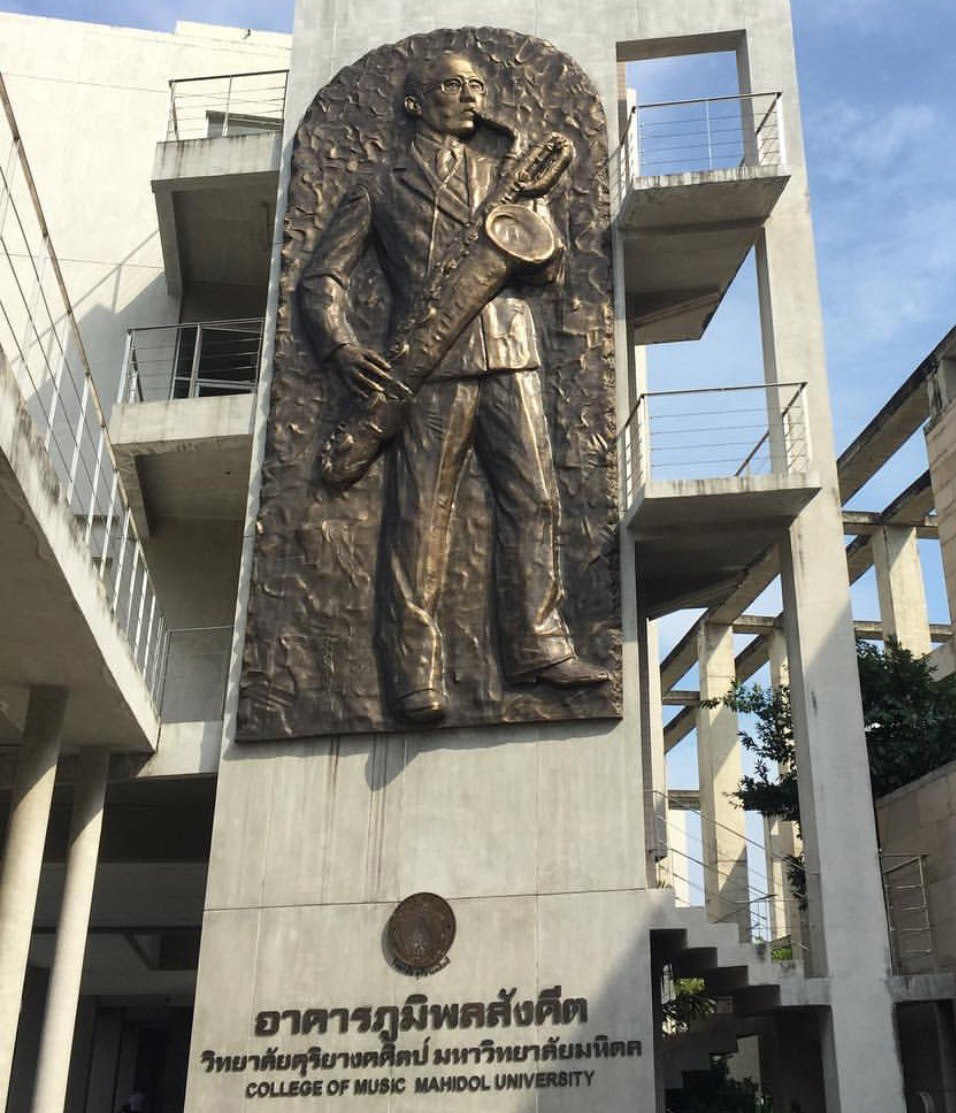 My activities here are centered around music-making—something which has always felt like home to me.  As chair of the composition and theory department I interact with the creative and administrative aspects of musical teaching and development. My goal here is to make more space for composition and creativity for the next generation to enjoy. I teach a studio of composers as well as a wide variety of lecture courses ranging from music theory, orchestration, form and analysis, electronic music, and 20th century literature, as well as help organize new music events for young composers such as the Young Thai Artist Award and the Thailand International Composition Festival. Most of my free time is spent exploring Bangkok and the surrounding areas.  When I am not composing or teaching, I particularly enjoy walking through the city while I practice using my language skills to find local recommendations.  My favorite activities are touring the many street markets, taking photos, relaxing with a Thai massage and visiting the Buddhist temples in and around the area.

Following the music took me far away, but has also guided me towards the music I was called to discover.

Following the music took me far away, but has also guided me towards the music I was called to discover.  Taking a path open to possibility can lead to enriched depths of craftsmanship, creativity, comprehension, performance, and perspective in deeply meaningful ways. As I will discuss in later posts, the impact of living in the collage of sensations Bangkok has to offer has gradually come to influence my music. Similarly, my own process of learning and the growing awareness of how to cultivate development would come to inform how I approach teaching and learning. In the next article in this series, I will talk more about the variety of options available for musicians abroad, Thai traditional music, and the appetite for contemporary music within the region. 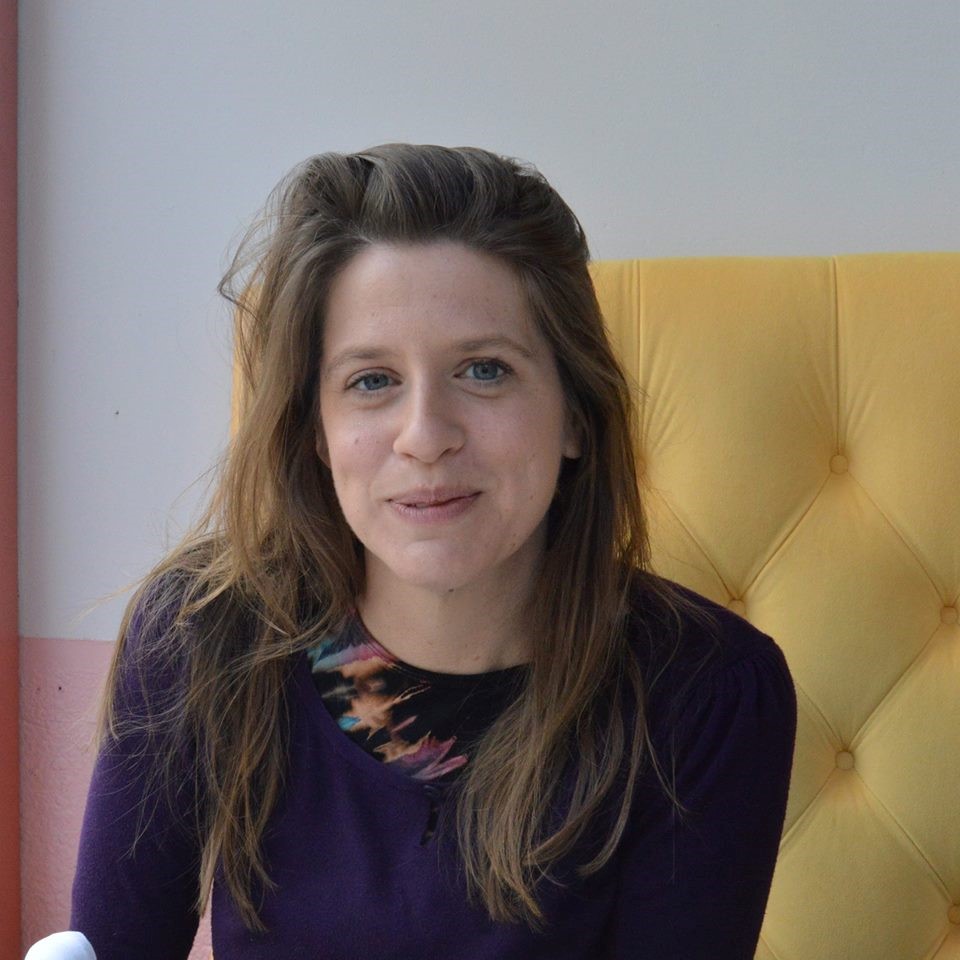 Judy Bozone’s music is as eclectic and vivid as the composer herself. She is currently chair of the composition and theory department at Mahidol University’s College of Music and enjoys following her love of music while reaching out for new experiences.