Everything is real. There is no audience.

It is absolutely reductive to think of music being solely either for the performer or for the audience. This is a both/and situation because we all get something different out of it. We are all there to play our own parts. 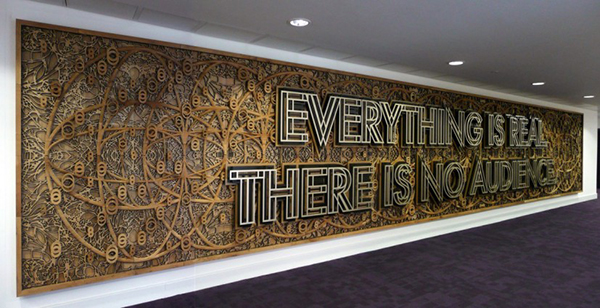 Contrary to annual fundraising-letter wisdom, I do not believe that music is a universal language. The immense variety of musical styles, systems, and genres performed around the world challenge our belief in a universal aesthetic. Do you immediately understand the use of Indian ragas? If you really stop to think about it, do you truly understand the complexity of Brian Ferneyhough’s music?

Music is a learned language, and it is a language that even as composers and musicians we must continue learning in order to stay literate. Even within the European “art” music tradition, can each music student write a fugue for transposing instruments? Furthermore, performing is a learned behavior. The understanding of music written and performed is not gifted to us at birth—otherwise music schools would have a much harder time collecting tuition!
Many in our community might argue, “Even if I don’t understand how to write a fugue, it doesn’t mean that I don’t understand music.” That is where we are making the distinction. Music performance isn’t just for those who understand the mechanics of music composition. Music and performance are relational. The fact is not that one understands the music but rather that one understands how the sounds heard, or produced, or written relate back to us. Music professionals are called to know more and that is why we endeavor to understand more of the language. Why is the sound organized in that fashion? Why does that chord make me feel that way? Performance is for all of us because it is generative not only for our own human capabilities but for our cultural system.

In my series of posts so far, I have argued that music performance is entirely for the performer and then alternately for the audience. What if music performance isn’t an either/or situation but really a both/and? It is both for the performer and the audience. In fact, it is larger than both because it is for the composer, the performer, and the audience member alike. Here’s the best part: the “and.” The act of performance is a special kind of social action—even at its most basic levels.
As Shakespeare’s famous line reminds us, we each have a part to play. When, at the end of a performance the conductor turns to the audience to gush, “You’ve been really great tonight!” I think we’ve all rolled our eyes at some point thinking, “Really?” Yes. You were there. You showed up. You actively listened and thus participated in this dialogue between musician and listener—a dialogue that is an inextricable aspect of the musical performance. You played your part.

The art object by itself is neither art nor non-art: it becomes one or the other only because of the attitudes and feelings of human beings towards it. Art lives in men and women… the processes of sharing become as crucial to the semiotics of music as the sonic product.
—from Music, Culture, and Experience: Selected Papers of John Blacking

We each have a reason for going to a performance. The terror of classical music marketers everywhere is that more audience members forget why they go to these performances in the face of all of their other options. It is true that some people go to a performance quite literally just to be seen. But we must consider the multitude of other reasons. Composers go to hear their musical ideas come to life. Musicians perform on stage to realize the fullest expression of their craft. Listeners go for escapism, for education, and possibly even for epiphany. The fact remains that each person in the performance space has a personal reason to be there. The very reason that performance is both/and instead of either/or is because we are all there to play our own parts.
Finally, there is no truer act of civil society than for all of the parties involved to voluntarily show up to a concert hall and exchange in ideas that are broader than the facts and figures of commerce. Music expresses the experience of individuals in society. Yes, there are examples of music performance bringing about social change. But, on an even more basic level, the act of presenting an idea through the arts that is being actively considered by another listening human is extremely valuable. At a time when polite discourse seems threatened at every turn, musical performance is an event wherein conflicting ideas can be corporately considered. Musical performance is an opportunity for each of us to further shape our own ideas and the society in which we live.

It was absolutely reductive to think of music being solely either for the performer or for the audience. This is a both/and situation because we all get something different out of it. We are all there to play our own parts: performer, listener, and composer. The essential thought of this argument is that there should never be two groups: the music-makers and the listeners. There are simply participants in the musical performance. Everything is real. There is no audience.