Two recent events at Washington, D.C.’s Freer Gallery of Art (which houses a portion of the Smithsonian’s collection of Asian art) have juxtaposed Western and Asian culture via concert programs of (mostly) contemporary music. In October, the Lark Quartet and koto player Yumi Kurosawa presented the quartet version of Daron Hagen’s koto concerto, Genji, and last week another concert at the Freer Gallery featured other recent works presented by Music from Copland House and Music from China.

Two recent events at Washington, D.C.’s Freer Gallery of Art (which houses a portion of the Smithsonian’s collection of Asian art) have juxtaposed Western and Asian culture via concert programs of (mostly) contemporary music. In October, the Lark Quartet and koto player Yumi Kurosawa presented the quartet version of Daron Hagen’s koto concerto, Genji, based on an 11th-century Japanese tale of unconsummated love. Hagen is well known as one of America’s most accomplished opera composers, and here he likewise structures the thirty-minute piece into a set of short scenes in the form of love duets, albeit increasingly unconventional ones.

This is Hagen’s first foray into writing for an instrument outside of the Western classical tradition, and the work takes full advantage of the koto’s capacity for twangy lyricism and percussive effects alike. The piece opens with folk tune stirrings that struck me as timeless while also strikingly removed from the surface sound of Hagen’s other music; but several minutes into the work, his own voice seems to emerge more fully and blend with the frequently folk-like melodic subjects. By the piece’s conclusion—a breathtaking unaccompanied cadenza that ends with a sigh rather than a bang—it was clear that Hagen’s concerto had convincingly explored an elusive and original space, one between the familiar and the distantly exotic. 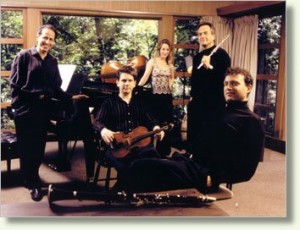 Last week, another concert at the Freer Gallery featured other recent works presented by Music from Copland House and Music from China. These two groups might seem like strange bedfellows considering Aaron Copland’s hyper-American-ness, but Music from Copland House—the ensemble in residence associated with Copland’s restored home in Peekskill that is curated by ensemble pianist artistic/executive director Michael Boriskin—is an ensemble committed to promoting and exploring the many paths that American music has taken, and this includes the intersection of American music and that of other cultures. 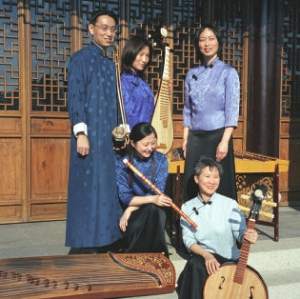 This Chinese-American concert made the most of these potential juxtapositions, featuring music by composers such as Chou Wen-Chung and Bright Sheng who emigrated to the United States from China as well as a world premiere by Eli Marshall, an American composer who has resided in Beijing since 2003. The program juxtaposed works for Western instruments with traditional Chinese instruments on the first half, while the second half featured works that combined the instruments of both traditions. The Chinese instruments included the pipa (a guitar or mandolin-like instrument), zheng (a large lap harp similar to the Japanese koto), as well as the erhu, an incredibly limited yet endlessly fascinating instrument resembling a one-stringed cello or viol. It was particularly enjoyable to Wang Guowei play duets with Copland House cellist Thomas Kraines during Lu Pei’s Scenes through the Window, which rounded out the program with its boisterous collisions of American and Chinese popular styles.

The contrast in Western and Eastern traditions—between a mastery of formal structures and subtlety of expressive inflection—can provide for all kinds of wonderful moments when present in a single musical composition, from surprising clashes to nuanced syntheses of stylistic traits. Some composers try to keep each instrument true to its own cultural moorings, while some of the best pieces translate a style through an unfamiliar instrument. Two short works by Zhou Long and Chen Yi (a truly talented husband/wife composer pair!) were written exclusively for Chinese instruments, and present an expressive dimension that seems inaccessible in these composers’ works for Western instruments—one that seems to transcend Western conceptions of time and meter and instead inhabits a world of pure expressive gesture. I didn’t find every attempt at cross-cultural music making to be a complete success, yet sometimes seeing two cultures collide less than gracefully is just the thing that makes us more fully aware of their profound individuality.