Aside from the spectacular content, these shows illustrated (to me at least) the impact of the venue and how spaces shape the experience and help guide the audience.

About halfway between Austin and Houston along Highway 290 is the little town of Round Top, Texas. You do have to take a brief jog off of 290 along Round Top road, but beyond that modest detour your trip from Austin is a pleasant but otherwise non-eventful one populated by tractors, fields, and the occasional cow; the whole thing is right out of central casting. Then, a few miles from your destination, a change occurs. You’ll notice tent frames as far as the eye can see, the skeletons of a seasonal economy that will shortly come alive as the Round Top Antique Fair, a semi-annual event that transforms the area from a quaint rural town to bustling marketplace. 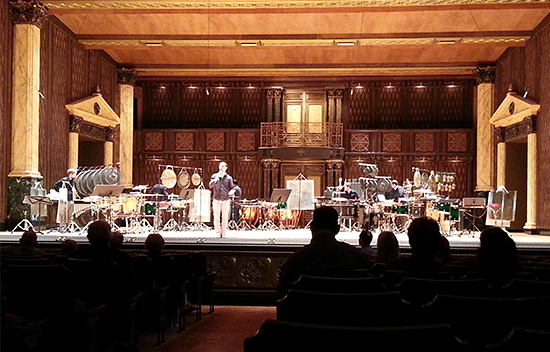 This scene was a somewhat surreal prelude to what actually took me down this particular stretch of Texas road. The real attraction and the area’s claim to fame is only a few miles further along at the Round Top Festival Institute where I recently saw the U.S. premiere of Hugues Dufourt’s hour-long Erewhon. Performed by an expanded line upon line percussion, the setup of around 150 instruments fit perfectly in the cavernous Festival Hall. Take a minute and think of every percussion instrument you’ve ever heard of. Now take a few more minutes and really dig deep. Now understand that every single one of those things was up on stage, with a few doublings to boot, and each was used to great effect over the course of the four-movement work.

Played without intermission, the piece began with rolls on floor toms and bass drums which were passed around the stage, with cymbal filigree serving to cut through the thunder. Marimba played with sticks provided timbral contrast while acting as a preface for the thundersheets and gongs that filled out the movement. The second movement was populated with alternating and overlapping washes of woods and metals with marimba and glockenspiel serving to head each choir. Rhythmic unisons rose from this texture and outlined melodic fragments which were in turn swallowed by rolls on cymbals and gongs, all giving the impression of time slowing down. The third movement began with similar material, though here the chimes outlined more distinctive pitch content above the ominous rumbling. The vibes returned, jittering awake and twisting in the shimmering gong wash, setting the stage for the final movement. The pitter patter of the toms in relatively steady and discernible patterns of sixteenth notes coalesced into a huge unison, perking up the whole room as bass drum and timpani joined the fray. This built to another peak, stopped abruptly, and restarted as a “greatest hits” of textures from the first three movements returned.


With all six players going to town for the bulk of the work, it became clear that density was the order of the day, but I was as or more intrigued by the role the location and its legacy played in my perception of the work. Pianist James Dick founded the Round Top Institute in 1971, and it’s well known for its summer festival and presentations of standard repertoire. It was interesting to see such dense music presented to a festival audience on a spring afternoon and frankly encouraging to hear the enthusiastic reaction to the work. Except for the two kids who I believe earned a week of ice cream for sitting quietly for the hour-long presentation, the piece was quite well received.

After leaving Round Top’s ornate hall, I headed back to Austin to check out an experiment.  I’ll admit to some skepticism when I heard about Craig Hella Johnson’s latest project entitled Fusion: Choral Song Meets Slam Poetry. Finding compelling novelty in the combination of two disparate genres (any two genres) is challenging and often simply serves to illustrate the differences in those genres. Further upping the difficulty level, Hella Johnson chose to present this work not in the churches and concert halls where he typically leads the vocal ensemble Conspirare, but at The North Door, the multi-level club where Fast Forward Austin held its festival last year. Of course, audiences come in all shapes and sizes, but in my experience the Conspirare audience does skew towards the traditional. However, they also have come to expect excellence and to accept a measure of guidance in the two decades Hella Johnson has run the show, and as such seemed game to give it a shot.

Hella Johnson took the stage and welcomed the audience to what he described as a “workshop and a work in progress,” the product of several rehearsals during which the three poets and seven singers shared their talents and attempted to see where they might intersect. He then conducted a literal embodiment of that guidance with a brief series of breathing and sound experiments with the audience, asking the members to “shhhh” and “sssss” their way through a centering exercise in hopes of connecting them with the nature of creating sound. Everybody was game and after giving it the old college try, they settled in to hear the pros go to work.

And go to work they did. Reimagined versions of masterworks by Monteverdi and Purcell were juxtaposed with extroverted slam poetry, which was sometimes delivered alone and other times delivered with Hella Johnson improvising at the piano or with singers providing accompaniment. Poets Kevin Burke, Danny Strack, and Lacey Roop delivered polished and thoroughly engaging performances—with all the trappings, gesticulations, and emotive power of a typical slam performance, including the occasional mid-delivery whoop and holler from the audience in mid-delivery. I suspect that some of these initial reactions were from audience members familiar with the give and take of slam poetry, but as the night went on, the rest of the audience warmed to this interaction, gaining confidence from Hella Johnson’s initial invitation to participate and building on it with reactions to elements of the poetry and music that spoke to them in particular. Among the many poetry highlights of the evening was Lacey Roop’s “Shark Boy,” a poem lamenting the almost certain change a young boy will make on his way to manhood, after which we were all a bit of a mess. The poets also played backup at times, quietly vamping on the lyrics from a wide range of tunes, from the aforementioned concert classics to reworked pop tunes. The physical space was used to great effect, with some music played from the stage and some from other points around and behind the audience, including the balcony. This constant change of perspective and content was refreshing and served to refocus each piece into its own vignette. 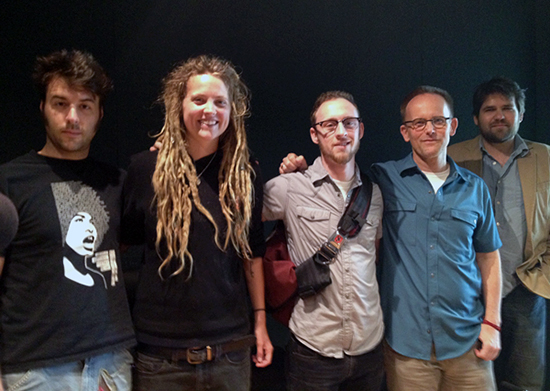 Perhaps what drove my initial skepticism was that I was looking for (or expecting) the wrong thing. I was concerned that a pet project built on an arguably acquired taste was going to be foisted upon an audience that had little interest in the material and even less on the delivery, and one that sure as hell wasn’t going to start whooping during Strack’s vivid descriptions of sexuality. I’m sure there were those who would otherwise take a pass on a presentation like this, but there was no mistaking the overwhelmingly positive reaction to the evening’s proceedings. There was no intermission during which I could casually eavesdrop, but there were many people who lingered after the show and I heard nothing but extreme enthusiasm. The word “interesting” was not used once.

Aside from the spectacular content, these shows illustrated (to me at least) the impact of the venue and how spaces shape the experience and help guide the audience. I wonder what these two shows would have been like had they switched venues. How many whoops and hollers would one have heard in the beautiful and ornate hall, performer encouragement notwithstanding? Assuming that all the instruments would fit, how would the presentation of Erewhon go over in a club just east of I-35? Would an audience sit quietly through an hour of such challenging music in an environment in which hopping up and leaving doesn’t involve a break of protocol and a series of eyes staring you down as you exit the hall? There are no definitive answers to these questions, but in the search to understand what drives contemporary audiences to shows, I think it’s important to keep asking them.