Stating that the DarwinTunes experiment proves that “selection rapidly evolves music from noise,” among other dubious claims, is problematic to say the least. Yet media coverage of the research may be perceived as a mirror of how our society generally interprets music.

In 2012, the journal Proceedings of the National Academy of Sciences published a paper with the thought-provoking title “Evolution of music by public choice.”[1] The research, led by Robert M. MacCallum, presented an environment—cleverly entitled DarwinTunes—in which a variety of short, looped sounds were capable of reproducibility, thus generating newer sounds based on certain qualities of the offspring’s progenitors. This so-called evolution was possible with help from almost 7,000 people who, on a five-point scale (“I can’t stand it” to “I love it”), had the fate of the sound loops in their hands. The samples that were most liked survived and had offspring, while the others died and had no further evolutional impact.[2] While MacCallum’s research might lead to an array of interesting implications from a scientific standpoint, it neglects a number of issues that I find significant if we wish to ponder the necessity for such a connection between music and evolution.

The DarwinTunes research claims that “a simple Darwinian process can produce music.”[3] However, it is quite difficult to say which specific samples have evolved more than others when all of them (older and newer generations) are in 4/4 and have the same tempo as well as the same pitch center for the most part—most perceivable changes are both textural and timbral in nature, while some also show a few melodic changes. In other words, if someone were to ask me whether a sound loop is more evolved than another one from the study’s pool of thousands of samples, I would not find myself capable of responding correctly. That is not to say, according to the experiment, that there was not indeed sonic change—undeniably, metamorphosis took place and produced different objective results over time.


In part, biological evolution precisely consists in the ability of a living entity to survive in an unfriendly context. In the case of DarwinTunes, those samples learned to pull through in a situation in which consumer choice set the rules for adaptability. In other words, we may speak of evolution solely within this experiment because the environment where the samples struggled was clearly defined. Music, nonetheless, is a complex cultural product that cannot be treated only as an art of sound organization—many other disciplines of human knowledge contribute a more satisfactory definition to music. Stating that DarwinTunes proves that “selection rapidly evolves music from noise,”[4] among other dubious claims, is problematic to say the least. Therefore, evolution via sexual intercourse might have influenced the development of the sound samples at stake, but such a conclusion cannot be extrapolated to the general evolution—for lack of a better term—of music.

On the other hand, media coverage of the DarwinTunes research may be perceived as a mirror of how our society generally interprets music. Rachel Ehrenberg from Science News writes: “Evolution makes noise into music […] Inspired in part by long-running experiments probing the evolution of bacteria, computational biologist Bob MacCallum and colleagues decided to see if pleasant music could evolve from a cacophonous mess when human listeners acted as the force of natural selection.”[5] Science also presents the study with the headline “Computer Program ‘Evolves’ Music from Noise.”[6] The Los Angeles Times introduces the topic from a slightly different perspective: “DarwinTunes software ‘evolves’ music without composers.” Later on, it goes into saying: “Composers, look to your laurels: A mere computer program can transform a racket of clangs, hums and beeps into a pleasing melody.”[7] Along the same lines, the BBC News headline says: “Music evolution: Is this the end of the composer?”[8] Moreover, the headline of The Sydney Morning Herald ironically claims “With DarwinTunes, who needs composers?” and ends up stating that “pleasant enough music had evolved out of the original noise, […] with chords, rhythms and rather repetitive tunes that would not be out of place in a modern pop song.”[9] mood:blog also announces that “starting with sine waves, MacCallum and Leroi used audience participation (a rating system) to shift the sounds until [they created] more pleasing rhythms and melodies.”[10] Even MacCallum and his colleagues ask themselves in the paper: “What makes the loops of later generations so much more pleasing? The aesthetic value of a given piece of music depends on many different features, such as consonance, rhythm, and melody.”[11] 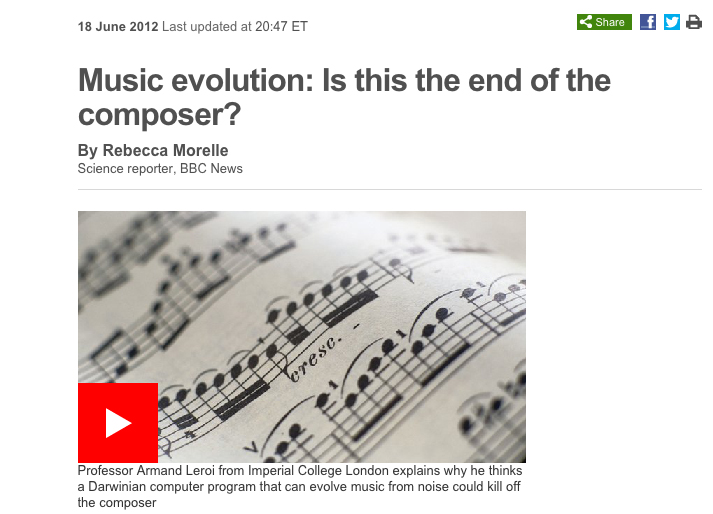 A recurring idea that appears in the vast majority of such media coverage is pleasantness. The only piece of information I have been able to pinpoint that finds the results of the study a little odd is by Michael Scott Cuthbert, a professor at MIT. Cuthbert argues that “[the research] doesn’t give any information about why music sounded differently in the past, why people like different things today, or how music might evolve in the future.”[12] Indeed, it is quite fascinating that this generalized, implicit discourse about the pleasantness of music leads to the unquestioned belief that real musical evolution does exist beyond the study. One of the most explicit examples of this conviction comes from Mark Pagel, a professor of biology at the University of Reading:

We often think that the classic songs are the best and nothing can improve on them. This just shows you the outcome of this great, sorting power of cultural evolution because the Radio 2 listeners are listening to songs that are the survivors of an earlier era; they were the best of their generation and they get played over and over and over again because they were the forms that were the best at competing for our attention. When those songs that we listen to on Radio 2 were first produced in the 70s or in the 60s, there were tens of thousands of other songs at the same time that weren’t as good and we’ve forgotten about them.[13]

The level of blatant reductionism is alarming. I do not have the space to delve deeply into the many issues that Pagel raises, but we certainly should not forget that things are not this simple: Adorno, Benjamin, Finkielkraut, Flotzinger, Harvey, Luhmann, and even Marx (among many others!) have seriously studied music and other artistic disciplines from a variety of perspectives in order to shed some light on whether some aesthetic patterns are more culturally relevant than others. Perhaps one should be more careful before publicly sharing certain views.

A first, dual conclusion could be drawn from both the original paper and its press coverage: (1) more evolved music (I am not sure what this means yet) is more pleasant and (2) music and noise are clearly opposed entities—we might want to ask Hijokaidan, Borbetomagus, or Phil Julian what they think about this dichotomy.[14] To the researchers’ credit, it does seem though that humans have a tendency to search for a certain degree of pleasantness while listening to music, whether the music is noisy or not. When asked why he makes noise music, Lasse Marhaug responded: “Because I like it. I enjoy the sound of dense electronic overload, feedback, and distortion. I like how noise both offers a space to move around freely within, and a feeling that engulfs you. It pleases me both emotionally and intellectually.”[15] Kasper Toeplitz was asked the same question and wrote back: “Then into my life came Japanoise, and noise in general, and music was exciting again! The long developments (more architecture than ‘proper music’), the pure physicality of the sounds (and not their ‘function,’ as you have in rock, jazz, etc.), and the passion. […] It is also good to add that it is one of the purest expressions of beauty, this music. Or pure ugliness, maybe, which makes it beautiful.”[16] I suspect that when the DarwinTunes researchers claim to be able to evolve pleasing loops from noise, they are basing their use of the word “pleasing” on a very particular tradition that by no means is shared by the entirety of humanity. The lack of acknowledgement of their own cultural bias is highly problematic and may lead some readers to question the role of musical evolution even within the framework of the study.

Another shaky issue that MacCallum et al. attempt to answer is whether composers are needed in order to make music. They conclude that “the ability to download, manipulate, and distribute music via social-networking sites has democratized the production of music and may change the balance of [the specialist guilds of composers and performers]. In partitioning these selective forces, our analysis points the way to the future evolutionary dynamics of digital culture.”[17] If we were to understand the figure of the composer as a Romantic, subjective creative force, perhaps it would make sense to claim that the DarwinTunes samples evolved without the need of an independent mind at work deliberately trying to achieve a specific sounding goal. However, composition has changed tremendously since the times of Beethoven. John Cage had already introduced chance operations in the 1950s, thus removing himself from the final audible result. A close collaborator of Cage, David Tudor created his own homemade, complex electronic circuits in order to generate unpredictable sonic outcomes. Cornelius Cardew’s Treatise is arguably one of the most interpretable scores that has been written. Back in the 1990s, Jeremy Leach and John Fitch worked together on XComposer, an intelligent composition software that was capable of generating its own melodic lines. Peter Ablinger, with help from Winfried Ritsch and Thomas Musil, designed Deus Cantando, an installation piece in which a computer-controlled piano generates purely acoustical sounds that resemble a human voice speaking. What I mean to show with these examples is that highly processed compositional procedures—in which the final outcome is not necessarily known by the composer—have been common for decades. As a matter of fact, as long as we understand current compositional practices through the lens of contemporaneity, it would be quite easy to argue that MacCallum and his colleagues were the actual composers of DarwinTunes.

At least for now, I do not think composers are going anywhere.

2 A compilation of these samples may be listened to on DarwinTunes’ Soundcloud site: https://soundcloud.com/uncoolbob/sets/darwintunes

14 These artists are known for their noisy, loud music.

15 Aaron Cassidy and Aaron Einbond, edit., Noise In And As Music (Huddersfield, United Kingdom: The University of Huddersfield Press, 2013): 129. 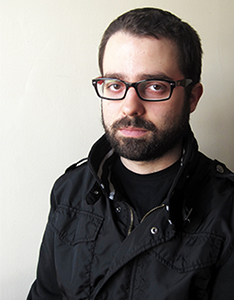 The music of Joan Arnau Pàmies (IPA: [d͡ʒu’ɑnəɾ’nɑu’pɑmiəs]) emerges from underlying issues related to text, sonic outcome, and the distinction between composition and interpretation as categorically different activities. Pàmies explores unconventional notational strategies in order to develop intricate formal processes. He is currently pursuing a D.M.A. at Northwestern University with Hans Thomalla as his doctoral advisor.