I have tried to emphasize the importance of students critiquing one another’s works in my Beginning Composition class for several years to great effect. This accomplishes several valuable things at once.

Normally when a potential student comes to visit campus to check out our program, they will usually just have their parents in tow. This last weekend, however, I met with a student who was not only accompanied by his parents but with his high school music teacher as well. At first I was leery about the potential for an awkward questioning session, but the teacher surprised me by not only being helpful in putting the student’s experiences in context, but seemed to be truly interested in how to help the student prepare for his upcoming composition audition in the spring. I have met many public school teachers in the past few years who want to help their students compose, but very few of them have any experience composing themselves. This was a prime example of that situation.

I made several suggestions of different types of composition assignments that the student could be given that could help him create works for his portfolio, and then–on a lark–I suggested that instead of the teacher simply creating and giving these assignments, he should take part in the process and compose his own work alongside the student. He and the student could then compare notes, so to speak, and critique each other’s works to find out what the other had done. Both will hopefully feel more comfortable composing in this situation and the trusting relationship between both will grow as the teacher allows the student to flex his own critical “muscles.”

This upending of the traditional teacher-student hierarchy had never occurred to me before in the context of high school students and teachers, but I have tried to emphasize the importance of students critiquing one another’s works in my Beginning Composition class for several years to great effect. Each Wednesday before a Friday reading session, the students in the class (primarily freshman composition majors along with non-composition majors of various ages) are asked to take part in “speed dating” sessions, whereby students pair up for 10-12 minutes and ask each other questions and offer comments about the other’s work. After the first “session” is done I’ll have them switch partners and usually we can get through 3-4 sessions in a class period. 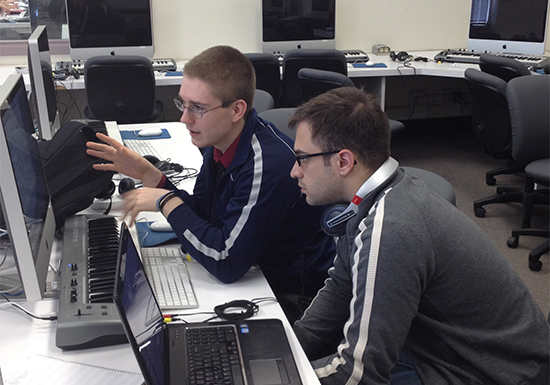 This accomplishes several valuable things at once–it allows me to look over their shoulders and give suggestions as needed, but more importantly it allows each student to not only have their work looked at and critiqued by several of their colleagues in a relaxed, non-confrontational manner, but also to gain experience analyzing and thinking critically about their friends’ works. Inevitably this becomes the favorite aspect of the course overall–they will always jump at the chance to have me stop “teaching” them and allow them to try their hand at helping each other–but they don’t realize that through this process they’re building the self-critiquing skills that are so important to a composer once they are out of an educational environment.

The concept of critiquing others works is commonplace in other disciplines, especially the visual arts, where the double-edged mechanism of giving and receiving constructive criticism hones students’ understanding of their own work as well as that of their classmates. It can easily be integrated into composition pedagogy as long as ground rules (respecting each other, openness to alternate or foreign ideas, etc.) are set down early and strongly enforced. As with the example of the student and teacher composing together and critiquing each other’s works, the process can not only give a composer confidence in their own ability but will many times suggest connections that result in epiphanies that would have never happened otherwise.