By subtracting a great deal of expected context, New Lens Concerts ask us to invent our own, inviting us to let go of our preconceived notions about composers new and old, or so the theory goes.

If there’s one thing this century has taught us about new music, it’s that context matters. As concert musicians discover new kinds of venues (bars, galleries, coffee shops, coat rooms, etc.) and new forms, these efforts reinvent and reshape the concert ritual—with varying degrees of success. New Lens Concerts, a concert series directed by Juhi Bansal and Garrett Shatzer, did something very interesting last Sunday night at the Colburn School’s Thayer Hall when they deliberately omitted all titles and composer names from their programs. By subtracting a great deal of expected context, they asked us to invent our own, inviting us to let go of our preconceived notions about composers new and old, or so the theory goes.

This is a great idea. Concertgoers inevitably bring a lot of baggage to every show (everything from “I hate modern music” to “pre-1950 composers are boring”), and the prospect of leaving that mental weight behind and just listening is a thrilling one. In practice, this turns into a kind of guessing game. For me it was not unlike turning on the radio in the middle of a very exciting piece of music and thinking, “I like this. What the heck is this?” This alone creates a kind of suspense that captures the attention. The pristine virtuosity of the performances by violinist Pasha Tseitlin and pianist Nicolas Gerpe, collectively known as the Panic Duo, enhanced this impression.

This is not to say that the performance was entirely contextless. Tseitlin and Gerpe spoke a little bit before each piece, discussing the composers’ inspirations and influences (while assiduously avoiding identifying information). This was highly effective at drawing thematic connections between pieces from disparate eras and aesthetics. On the first half of the concert, Alyssa Weinberg’s Four Stanzas, an homage to Debussy, felt like a natural follow-up to Paul Moravec’s Ariel Fantasy. On the second half, Jocelyn Morlock’s Phobos and Deimos seemed to share a cosmology with George Crumb’s Four Nocturnes (Night Music II). In between, Luciano Berio’s lush Luftklavier served as a kind of palette cleanser to open the second half, but the real centerpieces were two movements from Karol Symanowski’s Mythes and Ernst Bloch’s Poeme Mystique, which closed out the first and second halves, respectively. Bloch’s thoroughly romantic work, composed in 1925, stood out a little in this setting, perhaps unfavorably so, but Szymanowski’s pieces, written four years before, were strikingly radiant. More than anything else on the program, they seemed caught between the modern and pre-modern musical worlds, with thorny, strident clusters giving way to decadent, Scriabinesque textures. In that sense, it was a highly effective manifesto for New Lens Concerts as a whole, in its mission to connect new music to its history.

As if to drive this point home, after the concert we were finally provided with programs with complete information, bringing the narrative full circle. Context lost, and context restored! 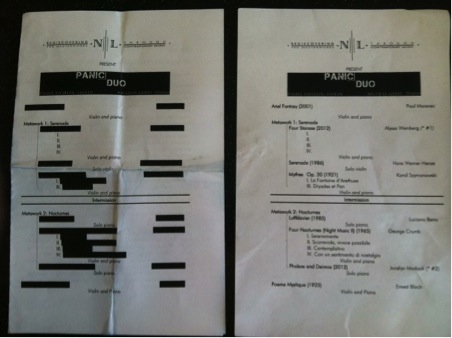