It all started with a conversation. My colleague across the hall at the Hugh Hodgson School of Music, percussionist Kim Toscano, came into my office one day and we talked for a long time about racism in the United States. Kim is married to Timothy Adams, professor in music and chair of the percussion department. He’s also a composer (and that’s going to be important in my story). Tim is black, Kim is white, and they have an adorable baby boy who melts hearts with kind, innocent eyes. Kim was worried (and still is) about the kind of world that her baby was growing up in. I was outraged at…well…any number of things that had happened in the previous year. What could we do as teachers? As artists? As conductors? As drummers? What could we possibly do to make things better? That’s kind of how the conversation went. Lots of questions, some rage, a lot of sadness, some hopelessness, some feelings of inadequacy and irrelevance, more questions. We talked again and conjured up some ideas for getting out of the university and reaching out to the community in Athens, Georgia through music. Sure, we’ve all done that—“outreach” concerts, teaching, church services, tours—but we wanted to do something more profound, more long-lasting and impactful. The kind of citizen-artistry that Eric Booth talks about: “a revolution of the heart within the arts.”

I knew we had to get Connie Frigo involved. Connie is the saxophone professor at the Hugh and she’s incredible. I’ve seen both her and her students do innovative and meaningful performances, and I had recently attended an event called “The Innocence Project,” which Connie brought to the University of Georgia that involved an unlikely but powerful group of diverse participants. The three of us met a couple of times and although we found the conversations important, even helpful, we talked in circles. Lots of ideas, a few leads, some phone calls, we even bandied around some dates, but nothing really landed. And we weren’t even sure what we were planning.

One, Connie and I went to “Athens in Harmony,” which brings together black and white communities in song. And here we were introduced to Mokah-Jasmine and Knowa Johnson. Mokah is the co-founder and president of the Athens Anti-Discrimination Movement, a grassroots organization in Athens, Georgia, that aims to combat discrimination through education and activism. She is also the co-founder and owner of the United Group of Artists Music Association (UGA Live), a business that specializes in music promotion and event production. She and her husband Knowa founded the Athens Hip Hop Awards, the Martin Luther King Jr. Parade, and Music Fest in Athens.  We knew that Mokah and Knowa had to be involved in whatever we planned.

At around the same time, Tim saw me in the hall one day and said, “Hey, I’m writing a piece for you.”

“Yeah, you, Connie, and Kim. You’re the narrator. It’s about what happened in Charlottesville.”

He was talking about August 12, 2017, when “Unite the Right” white supremacists marched, violence broke out, and 32-year-old Heather Heyer was murdered when she was mowed down by a man slamming his car into a group of counter-protesters.

We met several times with Mark Callahan, an incredible “connector” and thinker, at Ideas for Creative Exploration (an interdisciplinary initiative at UGA).  We knew we wanted to do something impactful, helpful, and important, and we wanted to involve an audience that might not normally attend a concert event in the Performing Arts Center on campus (a decidedly white crowd).

From here, things snowballed. Fast. That’s because the one-year anniversary of that horrible day was approaching, and Connie had the idea that we perform the piece.

Two problems. One, we didn’t have that more broadly welcoming venue. Re-enter Knowa Johnson. He suggests the studio of Stan Mullins, a local sculptor and artist of international renown, who occasionally opens his (huge) space for events. Knowa and Stan are friends. We meet at the studio and know immediately this is the place. Stan hears about the project and is totally on board. Read more about Stan; this guy is cool. 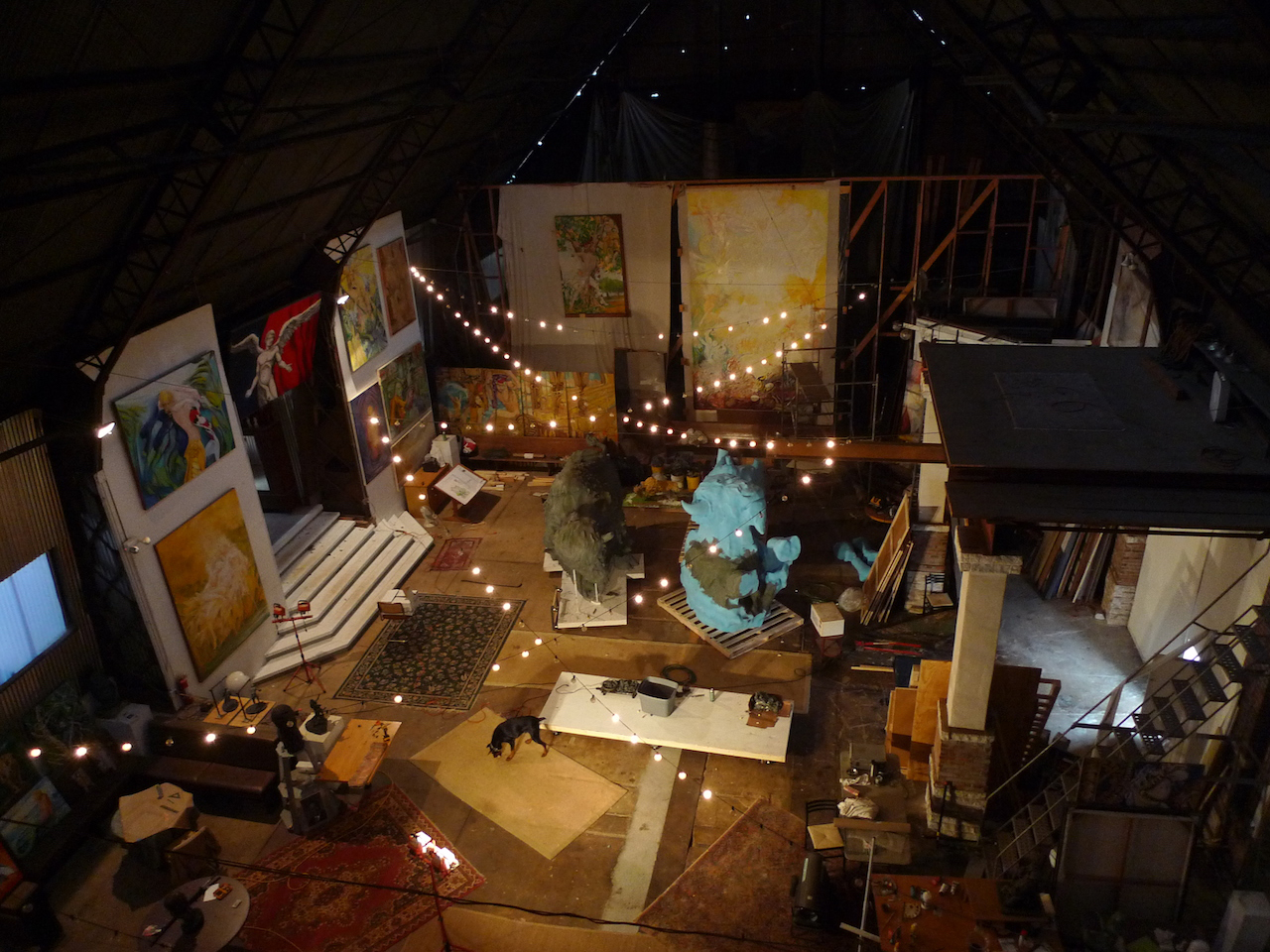 We had talked about the idea of workshopping the piece with community members early on in the process, but now, it was a given. Why? That was the second problem, the piece wasn’t finished.

Each of us (Mokah, Knowa, Tim, Connie, Mark, me) invited five specially chosen community members to attend the event. Here is the invitation, which also explains the process of “workshopping”:

The weekend of August 11, 2018, is the one-year anniversary of the “Unite the Right” rally in Charlottesville, VA, where white nationalists gathered to protest the movement to remove Confederate monuments.  The rally turned violent when counter-protesters gathered to express their opposition.  Dozens were injured and Heather Heyer was killed when a pro-Nazi, James A. Fields Jr., rammed his car into the crowd of counter-protesters.

In response to the events of that day, composer, percussionist, and UGA’s Mildred Goodrum Heyward Professor in Music Timothy K. Adams, Jr., is composing a new piece for saxophone, percussion, and narrator that represents his own processing of the Charlottesville rally.   The performers are UGA professors of music Connie Frigo, saxophone; Kim Toscano Adams, percussion; and Cynthia Johnston Turner, narrator.

On Saturday, August 11, 2018, portions of the new work will be shared in an intimate workshop setting designed to engage critical dialog between the audience and performers, facilitated by Athens activists Mokah and Knowa Johnson, and Mark Callahan, Artistic Director of Ideas for Creative Exploration (ICE) at UGA.  The goal of the workshop is to use audience feedback to further develop the piece, including where in Athens to perform its premiere in the coming months, and to invoke racial harmony as we unite members of the Athens community through contemporary music and important civic conversation.

You are being specially invited to this unique and intimate event. It will begin with a casual BBQ dinner, followed by the performance and workshop. Please bring an open heart and mind, and a willingness to engage.

Several colleagues, graduate students, and friends volunteered to help with the logistics (food, drinks, tables, chairs, paper, pens, nametags, etc.). Dale Monson, director of the Hugh, agreed to finance the BBQ dinner. As the audience members arrived, there was an air of wonder and excitement. During the casual dinner, many expressed that they weren’t sure what they were expecting but were intrigued by the message and the concept. It was a diverse and relatively intimate group. They were divided into three tables, and we began.

Tim introduced himself and the motives for composing the music. His words were inviting, sobering, effective, and poignant. We then explained that the piece wasn’t complete and asked the audience members to respond to the piece with honesty. Their insights would be important for the direction of the work. We performed the first movement. Immediately after, each group was given approximately ten minutes to respond and record their reactions to the music. We did the same for the 2nd and 3rd movements. We received a standing ovation. There were tears. Finally, Mokah facilitated a brief summary of thoughts which sparked important and heartfelt dialogue. The evening concluded. Another standing ovation.

For the August 11, 2018 workshop of Charlottesville, a work in progress by Timothy K. Adams, the composer/percussionist ultimately joined Connie Frigo (saxophone) and Cynthia Johnston Turner (narrator) for the performance.

As a result of that evening, we now have an ambitious plan for moving forward. Possible venues for the premiere, as suggested by audience members at the initial workshop, emphasized the importance of conversation and diverse audience participants. Ideas included The Chapel at the University of Georgia, an antebellum structure adjacent to a Confederate monument in downtown Athens, shared public spaces, the historic Morton Theatre, churches, and alternative art spaces in Atlanta.

Tim will be composing three more related works over the course of two years. We have applied for major funding with a proposal entitled, “Citizen Artistry: A Performance Model to Raise Social Awareness, Promote Dialogue, and Inspire Change.” We have guaranteed funding from other sources. Educators have volunteered to write curriculum. It’s exciting.

But what has been most exciting is the process. From those initial conversations to a series of serendipitous events to the authentic and important involvement of community members in the artistic process, this experience has renewed our commitment to citizen artistry. Those feelings of hopelessness and inadequacy and outrage have morphed into energy, relevance, and meaning. Trite as it may sound, I believe music can make a difference. In this case, it took a village, a little risk-taking, walking way out of our comfort zones, and a lot of trust in the process.