Though I play an instrument with an enormous American tradition, it was not until I arrived at my first bluegrass jam that I actually began to investigate that style. Why is it that children learning to play the violin in America don’t learn about the rich traditions of American fiddle music?

About a year ago I stepped into a new world of music and it changed my life. Every Sunday night the Quays Pub, a small Irish bar in Queens, plays host to a group of some of the friendliest musicians I have ever met. They are there to play bluegrass and they are there to drink Jameson. It’s a lot of fun, but it’s also serious music. It was a totally new world for me.
Though a classically trained violinist, I had begun playing folk music in college and continued collaborating with folk musicians after moving to New York City. It was always a lot of fun, but I never really knew what I was doing. My initial contact with folk music had come primarily from the notated tradition: the music of Dvorák, Mahler, and Bartók for example.
So when I stepped up to take my first solo at the Quays Jam, I was as nervous as I have ever been before a performance. I still have absolutely no memory of those first few months of breaks. I would go to play and 20 seconds later I would regain consciousness, not knowing what had happened. I was following my ear and attempting to improvise, but I was only just beginning to understand the musical traditions behind fiddle playing and folk music making in general. 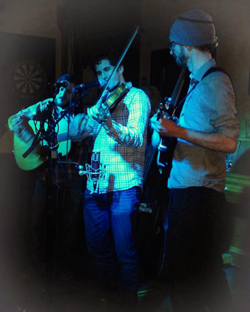 Ethan (center) with The Idiot Brigade. Photo by Michael Weinstein.

Now, after a year’s worth of discovering this music, many late-night jam sessions, and countless gigs (I did learn how to fake it quickly enough), one thought comes to mind upon reflection. Though I play an instrument with an enormous American tradition, it was not until I arrived at my first bluegrass jam that I actually began to investigate that style. Why is it that children learning to play the violin in America don’t learn about the rich traditions of American fiddle music?

From the perspective of technique, I suppose I can answer my own question. Playing old-time, Texas-style, Cajun, or bluegrass fiddle requires a slightly different approach to technique, particularly bow technique, from the Western classical tradition. But on a purely musical level, there is so much to be gained from exposure to the sounds of fiddle music, particularly in the realms of harmony and improvisation.

I honestly don’t think this would be that difficult. Even teachers who know very little about traditional music could assign interesting fiddle tunes to their students as a break between scales and etudes. It would be a moment in the middle of a practice session to reflect on just how much musical tradition exists in America. It would be a moment to recognize that most, if not all music comes, in some way, from folk traditions. It would be a way to connect the study of music to a greater understanding of the time, place, and manner in which it is created.
Bluegrass music changed my life by forcing me to challenge my concept of the folk. Rather than understanding it solely as musical material, I now understand it as living and breathing tradition. Incorporating folk music into the process of teaching notated music could breed a better understanding of other musical traditions as well as an openness to improvisation and composition. It could further the understanding of a musician not as a technician but as a creator, and of concerts not as galleries but as singular musical events.

How do you teach creativity in the process of teaching music?

Ethan Joseph is a musician and arts administrator. He serves as New Music USA’s Manager of Individual Giving where he focusses on building individual support for the organization at both the grassroots and major gifts levels. A classically trained violinist, Ethan currently performs with the experimental pop group Noise & Rhythm as well as the bluegrass band The Idiot Brigade.