By the Numbers
NewMusicBox
Written By

Last week, the website “Vida: Women in Literature” published their 2011 count. This series of pie charts visualizes the ratio of female to male representatives in various categories—including published fiction, book reviewers, authors reviewed—at some of the most prestigious periodicals in the fiction world. Writers from all walks of life quickly condemned the ratios, and many of the editors promised to look into improving the equality of gender representation within their pages. The main thing that struck me about these numbers is this: If they had been generated by concert presenting organizations they would have seemed exceptionally progressive.

Last week, the website “Vida: Women in Literature” published their 2011 count. This series of pie charts visualizes the ratio of female to male representatives in various categories—including published fiction, book reviewers, authors reviewed—at some of the most prestigious periodicals in the fiction world. As an example, The New York Review of Books, considered one of the most important publishers of criticism on contemporary works, contracted with female reviewers 21% of the time (roughly four male reviewers for every female) in order to talk about books whose authors skewed 82% male. The New Yorker performed marginally more equally, with 28% of their articles generated by female authors and exactly one third of their “Briefly Noted” reviews devoted to works by women. A quick scroll through the statistics shows most publications representing women in the 20–30% range, with Granta standing alone as the only publication who published more women than men overall. For more context on these numbers, I recommend Danielle Pafunda’s “The Trouble with Rationalizing the Numbers Trouble”.

I’ve been following the online reaction to these numbers with interest. Writers from all walks of life quickly condemned the ratios, and many of the editors promised to look into improving the equality of gender representation within their pages. Although there are obviously many people who defend current practices, the literary community appears to have reached an overall consensus that this sort of inequality is wrong and should be corrected.

The main thing that struck me about these numbers is this: If they had been generated by concert presenting organizations they would have seemed exceptionally progressive.

I co-founded the ensemble League of the Unsound Sound, which has presented four different concert programs over two seasons. Since I try to be aware of gender inclusivity, as part of our programming, I took care to ensure that each concert included at least one female composer. As our ratio of 5 works by female composers compared to 13 by male composers shows (when considering specific pieces as represented on distinct concert programs—repeated programs at multiple venues are considered as a single concert), the literary community would have considered my efforts to be an abject failure. 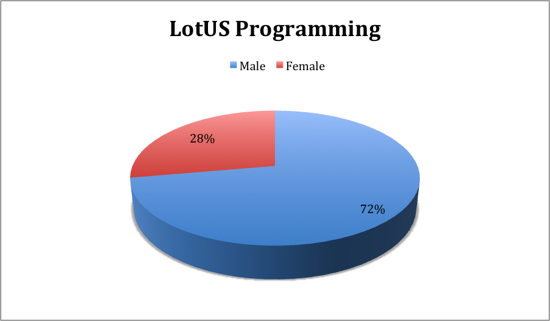 I wondered how LotUS compared to other new music ensembles, and so I unscientifically perused the websites of some of my favorite groups. I want to emphasize that I chose the following groups because I think they are all wonderful and also because their sites made the data easily available. Each of these ensembles is comprised of amazing performers who I would pay to hear perform any repertoire, and I believe that they are among the most progressive programmers in the U.S. today. In short, I only included artists for whom I have the utmost respect and who I believe care about working towards gender equality in their programming. If I took the time to check other groups, I strongly believe that the ones listed below would remain among the most equal in their gender distribution. This makes the data that much less encouraging.

Before continuing, I need to stop for an important caveat. The Vida site spends months compiling and checking their statistics. They look at the same publications over years. Their charts are created with a scientific rigor that I am not trying to equal. I compiled the data for the charts and ratios below by quickly perusing the websites of some of my favorite organizations. I might have miscounted. Please consider the following as rough estimates only.

Now celebrating their 25th anniversary, Bang on a Can has long been on the vanguard of new music, and so I was not surprised that the listed ensemble repertoire for the Bang on a Can All Stars displayed the most equality among the ones I counted. Their ratio of 13 works by women compared to 47 by men composers counts as the highest percentage of women among those surveyed. 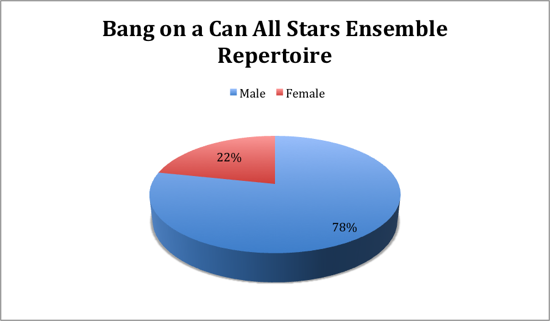 Other of my favorite new music groups all showed gender distributions with more than four men represented for every woman. The incredible JACK Quartet lists 100 pieces in their repertoire, of which 12 are by women. According to their website, Eighth Blackbird has been responsible for the creation of an astonishing 100 commissions, of which 18 are by women. Chicago’s Ensemble Dal Niente, prints event listings that show that they have programmed 75 works this concert season (when considered like LotUS so distinct concert programs are counted separately but the same set of pieces performed in multiple venues is only counted once), 7 of which are by women. The current repertoire list of Alarm Will Sound names 65 different works, of which four are exclusively by women, one is an arrangement of the all-female band the Shaggs, and one is a John Lennon/Yoko Ono collaboration. 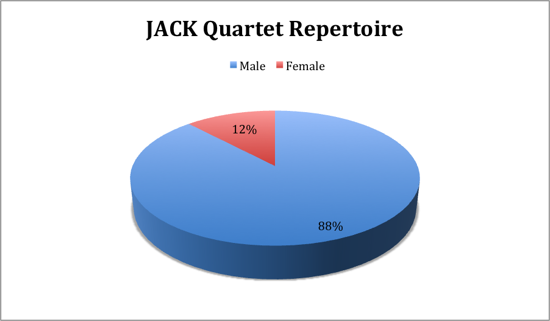 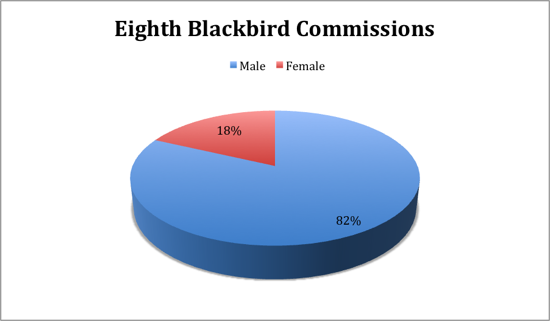 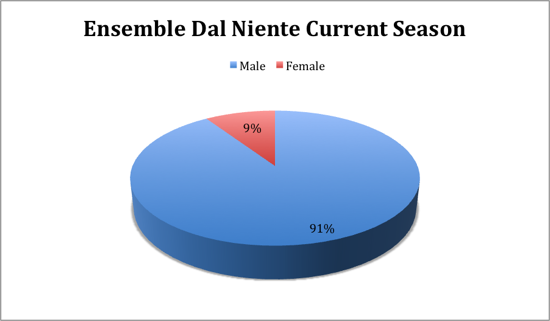 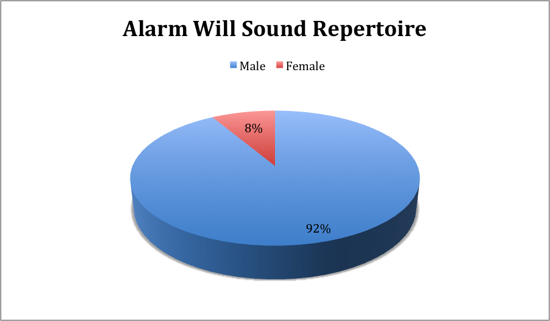 As I state above, I chose these groups because I imagine that they are among the most progressive programmers working today (and also because their websites are organized so that this data is easily available). I believe each of the ensembles I cite above has artistic directors that keep the goal of gender equity in mind when they determine their concert repertoire. It seems that we still have to travel far in order to achieve true equality.