Why music students should be more wary than anyone about education debt. 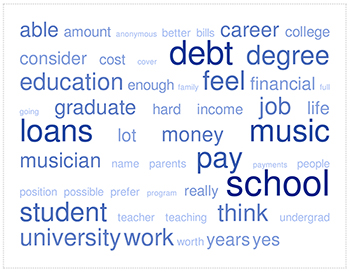 Every spring, music schools across the country celebrate commencement. There are processions and ceremonies, brunches and barbecues. Young, talented students have performed recitals of demanding repertoire, gained valuable ensemble experience, and passed through the gauntlet of theory, ear training, and music history. Commencement speakers advise graduates to be bold, creative, and persistent as they begin their careers. During this time, few commencement speakers will breathe a word about what will happen in precisely six months’ time, when the first student loan bill arrives on graduates’ doorsteps. That particular milestone will occur without fanfare, but represents a life-changing reality of its own.

Educational debt, which recently reached a total of one trillion dollars, is an acknowledged crisis in the United States. In the context of our struggling economy–which tanked just after my own graduation in 2007–the situation is even more dire. For the average American college graduate, making loan payments is not as easy as she thought it would be. Many of the good-paying jobs that she planned on have evaporated.

And what about musicians? Did any of us plan on good-paying jobs in the first place? As American orchestras struggle financially, competition for these jobs gets fiercer and pay gets lower. Academic positions are equally competitive and often require a doctorate–which means more education and often more debt.

Enter the biggest music career buzzword of our generation: entrepreneurship. Books like Beyond Talent and The Savvy Musician acknowledge that “traditional” employment for musicians is disappearing and that an innovative approach is essential. Several top music schools–including Eastman, the Manhattan School, Yale, and the New England Conservatory–now have Centers for Music Entrepreneurship. Students receive guidance on forging careers outside academia and the orchestra. They are warned about the difficulty of the formal job market. They are encouraged to develop multiple income streams, create their own opportunities, found ensembles, and create a strong online presence. In my own experience, this approach can absolutely bear fruit. We can create interesting and rewarding musical careers, even without the auspices of a “real job.”

But financial freedom–or at least a shred of financial flexibility–is an essential prerequisite for entrepreneurship. For many young musicians confronting high loan payments, financial flexibility is decades away. And when they were eighteen years old and committing to taking on a financial burden that they could not have fully understood, most of their adult mentors did not let them know that their educational loans would change their lives.

There’s a reason that our parents, teachers, and even our Deans of Students may not fully understand the way that our debts could cripple us. It’s because the cost of a college degree, according to Bloomberg, has increased more than 1,000 percent in the past thirty years. My own parents worked their way through degrees in vocal performance at Boston University in the 1980s. Today, a year at BU costs more than $53,000–more than most twentysomething musicians expect to earn in a year. Cognitively, our parents and mentors can hardly keep up with the way things have changed. “Student debt is good debt,” they might have told us. But they probably weren’t imagining a $60,000 higher education bill at 6.8% interest. They weren’t imagining a burden that would make a career in music untenable.

Given this gap, who is equipped to advise current music students about the realities of student debt in 2013? I’d argue that it’s the twentysomething musicians currently paying off their loans. So I reached out to my peers to see who might be willing to talk about the way their student debt has shaped their lives and careers. I was moved by their clear-sightedness; I was grateful for their candor. Several themes emerged in their responses, and I believe these are the words that young artists–and the adults surrounding them–need to hear before signing on the dotted line.

Higher debt means less freedom to practice, grow, and choose rewarding work. “My monthly loan payment scares me into taking every single job I’m offered,” said one Chicago freelance musician. “During certain busy times of year, I can’t prepare nearly as well for each performance as I wish I could. In general, I am not able to be as selective nor as productive as I’d like to be as an artist, because paying off my debts feels so urgent and burdensome.”
Krista Lucas, a local bassoonist, said that “in order to pay student loans–not to mention rent, bills, and food–a ‘day job’ is all but impossible to avoid. Working 40 hours a week pays the bills, but it also cuts down drastically on free time to practice and improve.”

Higher debt often means working long hours outside music. “I have had to move into a different field as my primary source of income,” said composer Sarah Ritch, who co-founded Anaphora Ensemble and helps run the Beethoven Festival. “I now work in technology, and have gone back to school to give me the tools to flourish in that field.” Matthew McGuire, a music educator in Massachusetts, agreed. “I’m considering leaving my [music teaching] job to pursue a career that will pay better. I’ve stopped taking gigs so that I can work higher paying part-time jobs, and turned down all music composing/arranging opportunities that do not pay well, even if it is something that I would enjoy doing.”
Horn player Joseph Kosowski’s debt from DePaul made a freelance music career seem simply impossible. “It’s made me feel as though pursuing a career in line with my degree is too risky,” he said. “I feel the need to have a ‘real job’ with a steady income in order to meet the loan payments, and that freelancing, the occasional small orchestra gig, scrounging up students, and the like would be too much of a burden.”

It’s hard for young adults to give up “dreams” and prestige when choosing their educational price tag.
“This whole situation,” said Krista Lucas, “is made worse by the fact that music students are pressured to attend expensive conservatories with ‘prestigious’ programs and pedigrees.”

“I could have stayed closer to home and gotten my schooling paid for,” said flutist Alexis del Palazzo, “but that would have meant giving up on a lot of the dreams I had. At 18, I wasn’t willing to compromise.”

Matt McGuire remembers a similar feeling when he chose to attend his dream school, the Berklee School of Music. “I was told of the dangers of putting myself in debt,” said McGuire, “but it was difficult for me to make those choices as an 18-year-old with my heart set on the school I wanted to attend.”

Other musicians noted that they intentionally gave up prestige when choosing a more affordable path. “I went to schools that would give me money so that I wouldn’t have debt,” said Chicago cellist Alyson Berger. “I have no big name schools on my resume. I could’ve gone into debt to get the cred on my bio–maybe I should have–but I chose not to.”

Start-up costs for a music career are high. Young professional musicians are expected to fly themselves to orchestra auditions, own expensive instruments, attend prestigious but low-paying professional training programs like the Chicago Civic Orchestra, and, of course, put in the most important unpaid work hours of all: personal practice time. But when bills start to pile up, those career-building moves come into conflict with financial responsibility.

“What I was unprepared for was exactly how hard it is to get started as a musician,” said cellist and teacher Natalie Hall. “It’s not like you just walk into a full-time job right out of school.”

“The reality of paying off my student loan debt never really occurred to me when I was 18, 19, 20 years old,” said another Chicago musician. “But it definitely sunk in and created tension and stress for me by age 22, when it became clear that there weren’t $80K orchestral jobs just waiting for all my fellow graduates and me.”

There’s a lot of shame and secrecy surrounding debt–and that often means we aren’t talking about it. Our culture places a high premium on financial privacy–talking about money is often considered inappropriate–but this means that indebted musicians don’t talk about one of the most important stressors in their lives. Respondents described “a heavy burden hanging over” them, “constantly scrambling to stay ahead,” and unrelenting stress.

“I find it embarrassing to be so successful on the outside, yet to have such a big burden hanging over my head,” one respondent said. “I don’t want to share those worries with anyone else.”

“I feel dependent on others in a way that makes me feel ashamed, depressed, and anxious in my so-called adult life, partly because my debt looms over me all the time,” said another.

So how can young musicians avoid life-changing debt? Of all the questions I asked, this one seemed to inspire the greatest candor from my interviewees.

Cap your total debt amount. “Do not put yourself into incredible amounts of debt,” advised Matt McGuire. “Regardless of where you go to school, you will get out of it what you put in. Work ethic, dedication, personal sacrifice, passion, and study are just as valuable at a state university music program as they are at an expensive private music program. A great work ethic can overcome many challenges as long as you’re patient. But it may not be able to overcome a six-figure student loan debt if you choose to pursue a career in the arts.”

Take some time off before grad school… or skip it entirely. “The feasibility of making a life in music is different for each of us,” said oboist Andrew Nogal, “but I think I’d urge musicians in general to keep their years of formal schooling to an absolute minimum. There’s an expectation that a musician will immediately pursue a masters degree after finishing their bachelors, but that track can be a shortcut to massive amounts of debt. I think musicians need some time away from the safe academic environment in order to evaluate what being a musician really means to them and estimate what it will take, emotionally and financially, for them to keep doing it at a high level.”

Know that you can’t pay your way to building a strong network. “The learning doesn’t only happen in the classroom,” Joe Kosowski noted. “It happens in the outside rehearsals, gigs, jazz clubs, symphony halls, after concert parties, summer institutes, and all the other places you spend time with the people you meet because you are in music school. If you can manage to get those same experiences and playing opportunities without incurring the exorbitant debt, do it.”