This installment of the Soundspace series was arguably the most ambitious to date. The fact that it was the largest turn out yet is a testament to the quality of the music and the hunger Austin audiences have for new and interesting music.

Seventy-six Trombones, sir? Clearly you are not trying hard enough. Steve Parker’s recent Soundspace installment at the Blanton Museum searched for symmetry in a variety of ways, and nice round numbers like 80 seem to have fit the bill. The series stayed true to its name by encouraging the audience to circulate around the museum during the performances, as pieces overlapped in a variety of locales throughout the space. The symmetry was also manifest in the composition of the works and the organization of the performances. Each piece was performed twice in a large-scale presentational arch form, with the pivot point occurring at 3:00 p.m. 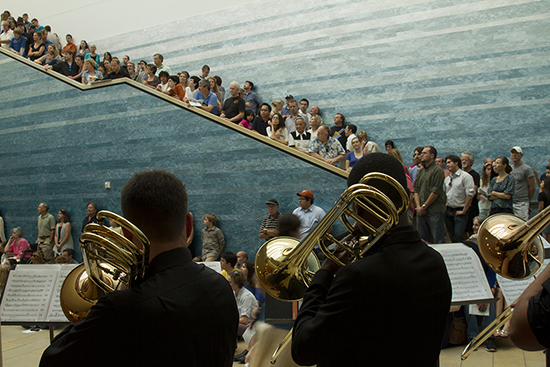 To describe the performance of Henry Brant’s Orbits for 80 trombones, organ, and soprano as antiphonal doesn’t do it justice. Multiphonal? Omniphonal? Surround Sound 80.1? Words can’t fully express the experience of being in the belly of the beast during this performance, one in which the occasional interjection of the organ is the respite. Starting on the first floor and winding up the stairs and around the second-floor landing in the two-story open space near the entrance of the Blanton, the 80 trombonists worked their way through devastating sound masses, angular, stabbing gestures, and occasional glimpses of conventional choir moments. Organist Charlie Magnone played amplified keyboard on the first floor while mezzo-soprano Laura Mercado-Wright held court on the second floor. They shared the spotlight in delicate counterpoint–light, thin pops of sound echoing about before being subsumed by the trombone onslaught. The atrium of the Blanton is covered in a variety of blue tiles, giving a visual sense of the ocean, and here the trombones came again and again in wave after wave. 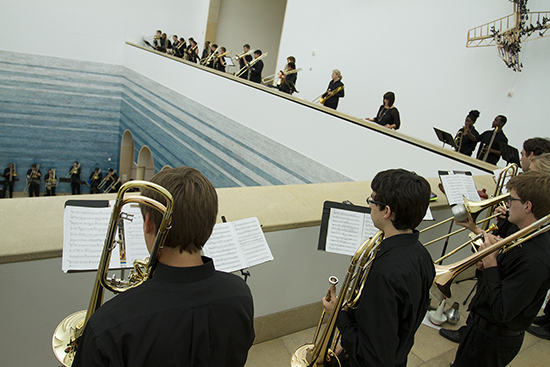 Inspired by the work of Dmitri Tymoczko, jazz theorist Barry Harris, and Toru Takemitsu, guitarist Thomas Echols performed a solo set which mirrored the arch form of the entire event. He started with an electric/acoustic improvisation entitled Mutatis Mutandis complete with a theremin which was manipulated by the audience, allowing for participation in the show. The improvisation was followed by Takemitsu’s transparent In Twilight, which was followed in turn by another improvisatory set. Adam Bedell performed Stockhausen’s Zyklus, a circular exploration of keyboards, bells, drums, and triangles, among other instruments. The performer is called upon to start anywhere in the score and play until that initial moment is reached, so it’s unlikely that any two performances will be the same. Bassists P.K. Waddle, Jessica Valls, Christopher Flores, and Pat Harris gave a truly sublime performance of Reflections on Whittier and Ives for bass quartet by Bertram Turetzky. Largely chordal, pulsing with lazy melodies that rose to the surface only to slowly sink again, Reflections was the most meditative of the offerings.

Laura Mercado-Wright performed a number of works, including two premiers by Shawn Allison. She was joined by baritone Thann Scoggin for Three New Lullabies. Conceived as a modern “parental duet” of sorts, the piece reflected the challenges of creative parents trying to balance work and home life. Scoggin and Mercado-Wright sang from opposite sides of the dimly lit room, trading slow, winding lines back and forth. Also presented was [höre] with percussionist Cullen Faulk. If you picture the room as a clock face, Faulk was positioned at noon, with Mercado-Wright at 9 o’clock. Atmospheric at its core, [höre] initially sounded like traded breathing, with Mercado-Wright’s sighs dovetailing with the gentle lines and bowing in the vibes. This progressed to a more visceral coming together just past the halfway mark as she moved counterclockwise around the room, the climax of the work occurring as she neared the percussionist. She then returned to her initial spot, this final move paired with a return to the hushed whispering texture of the opening. I Will Wait by Keith Manlove continued the theme of space utilization by having Mercado-Wright move in, out, and around the room while performing. Said Manlove of the work, “I give the performer multiple streams of information (more than they can physically perform) as a …way for them to improvise and extend the instrument. I’ve given all the information of the piece in two measures that the performer repeats over and over, (and) they’re allowed to choose as little or as much information as they like. The idea is that no matter how much the performer struggles or tries, how well they perform, how much or little information they use, they’re stuck in this loop. They’re waiting for someone.”

From the score for Keith Manlove’s I Will Wait. Copyright 2012 Keith Manlove. (Click here for a larger and more complete version of the score.)

Cathy Berberian’s Stripsody lent a mid-century lightness (the only time that ever happens) to the proceedings. The score for Stripsody is essentially a series of comic strip tropes (represented on Berberian’s score with illustrations by Roberto Zamarin) and its performance was greeted with smiles and wonder by all.

Clarinetist Nathan Williams’s animated performance of Stockhausen’s In Freundschaft was a feast for the eyes as well as the ears. It wouldn’t be Stockhausen if the work wasn’t mathematically rigorous and methodically planned (pitch and rhythm are mapped onto an X-Y axis, and the work is conceived in three voices), but the impact was anything but dry and mechanical. The performer is directed to face forward, stage left, or stage right for various phrases, and the different voices are “aimed” up, down, and center, relative to their range. For example, Williams would play a high floating line while facing left, then rapidly face forward to deliver a honk or multiphonic in the midrange, then just as quickly face right to explore the chalumeau range. These rapid changes resulted in a performance that had the impact of watching a solo actor performing multiple roles, right down to the changing of perspective between characters. 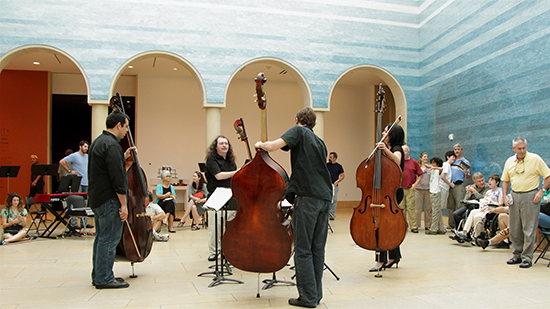 This installment of the Soundspace series was arguably the most ambitious to date. Organizing 80 players of any given instrument is a challenge in and of itself, but to do it twice in one day is a tall order in any market. Add to that a number of premiers, a huge performance space(s), invaluable art, and a roaming audience, and you’ve got more than a concert, you’ve got mini-festival. The red thread of symmetry that ran through the show gave a sense of continuity while allowing for a wide variety of performances and experiences. This was the largest turn out yet for a performance at the Blanton, and the fact that it was on a Sunday afternoon in Austin in early fall (a time when all things outdoor are picture perfect) is a testament to the quality of the music and the hunger Austin audiences have for new and interesting music.