Believing in Ghosts
NewMusicBox
Written By

I feel that many of our problems as composers are self-created byproducts of something that is not actually there. Oftentimes, our compositional ghosts are constructed more out of our own fear and anticipation of disapproval, absorbed through a strange form of social osmosis rather than handed down from an authority figure on high.

Although it was a long time ago, it’s easy for me to recall the anxiety, tension, and sheer terror of being alone in the dark as a young child. As any former children reading this might attest, what makes the experience so frightening isn’t the darkness itself, but rather the darkness’s ability to thrust us into an indeterminate state where ghosts, monsters, and bogeymen might be swarming under the bed. As children we were still open to these kinds of possibilities, and the sense of sight which might have disabused us of these fears had been dimmed with the lights out. As an adult, I’m pretty sure there was never anything under the bed, but it was the belief in ghosts—not the existence of ghosts—that gave the experience of being in the dark such power.

Likewise, I feel that many of our problems as composers are self-created byproducts of something that is not actually there. For me, compositional ghosts often assume the form of teachers, peers, idols, or competitors, although they can also come to embody the opinions of panels, foundations, or imagined groups of critical people that may not in fact have a sound basis in reality. Oftentimes, our compositional ghosts are constructed more out of our own fear and anticipation of disapproval, absorbed through a strange form of social osmosis rather than handed down from an authority figure on high. We internalize expectations from friends, enemies, and mentors without full awareness of having done so; we believe everyone else’s tall tales, and this gets in the way of writing our own story.

Composer David Rakowski’s duly celebrated buttstix are a way of making compositional phantoms tangible and, moreover, just as ridiculous as they really are. I was never a student of Davy’s but always identified with his desire to see what he, figuratively, had a stick up his ass about. As Rakowski points out in his excellent NewMusicBox interview with Frank J. Oteri, we all have different hang-ups and assumptions and habits and fears and contentments that make us who we are, and sometimes it is the case that certain “buttstix” do provide us with useful tools or at least the discipline of having negotiated a particular rigidity; it’s just that, unexamined, a composer’s buttstix can inhibit personal and artistic growth. Some of Rakowski’s own buttstix include “serious music is slow music” as well as “improvisation is not composition.” In an official buttstix follow-up post on his blog, Rakowski relates how each time he discovered (and occasionally, extracted) a new buttstick, his music began to seem less a part of the “camp” he currently identified with and more like, well, himself. 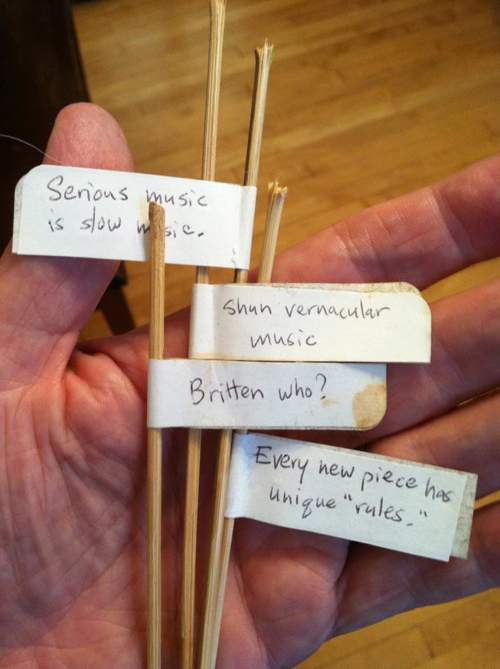 I can’t help but think that Rakowski’s buttstix have done more pedagogical good than a whole four years of masterclasses with impressive prize-winning composers. The process of identifying and removing myriad buttstix is comparable to the terrified child turning on a light: in both cases, the phantom Unacceptable Act is easily cut down to size, or even revealed as entirely imaginary—but as long as they reign from the shadows, the phantoms are able to exert a terrifying influence.

Bringing our assumptions and hang-ups into the light of day can put them in their place, whether we view them as ghosts to be dispelled, buttstix to be yanked, or as just a few of the many available channels on the satellite TV of reality.

As another academic year begins, I have a few college visits planned and have been thinking about the compositional ghosts that most often haunt today’s generation of young composers—including assumptions and dictums about the process of composing, an area of composing rarely afforded the attention it deserves in today’s undergraduate curricula. Below are ten of the biggest, baddest ghosts that seem to be influencing many young composers today, and which we would do well to examine. The following precepts should be questioned and challenged just as forcefully as the belief in supernatural creatures lurking under the bed:

1. Measures of music generated=progress made (corollary: erasing measures is a shameful step back).

2. Studying works we laud and admire is more beneficial than taking a closer listen to works or (genres) which we dislike.

4. The presence/absence of any one award/accomplishment is, in itself, capable of making/breaking a composer’s chances.

6. Composition should reflect the results of conscious deliberation, rather than communion with the hidden unconscious.

7. The main point of school is class and the assignments/learning/social relationships acquired therein.

8. Explaining why you made a musical choice is equivalent to justifying that same choice.

9. The type of attention we bring to music is irrelevant to how that music is experienced.

What compositional ghosts have haunted your nights? And what caused you to invest them with so much power?