While we wanted to provide a wide variety of music for the band directors, we knew that we still needed to pay the composers for their time and thus keep the number realistic. In the end, we settled on five total composers—myself, Max, Scott Senko, Neil Quillen, and Dylan Carlson.

Having developed a rough idea of what our consortium would look like, my colleague (and now co-director) Max Lafontant and I got to work. The first big task was to figure out how many composers we wanted to have involved and who we were going to ask. While we wanted to provide a wide variety of music for the band directors, we knew that we still needed to pay the composers for their time and thus keep the number realistic. In the end, we settled on five total composers—myself, Max, Scott Senko, Neil Quillen, and Dylan Carlson. 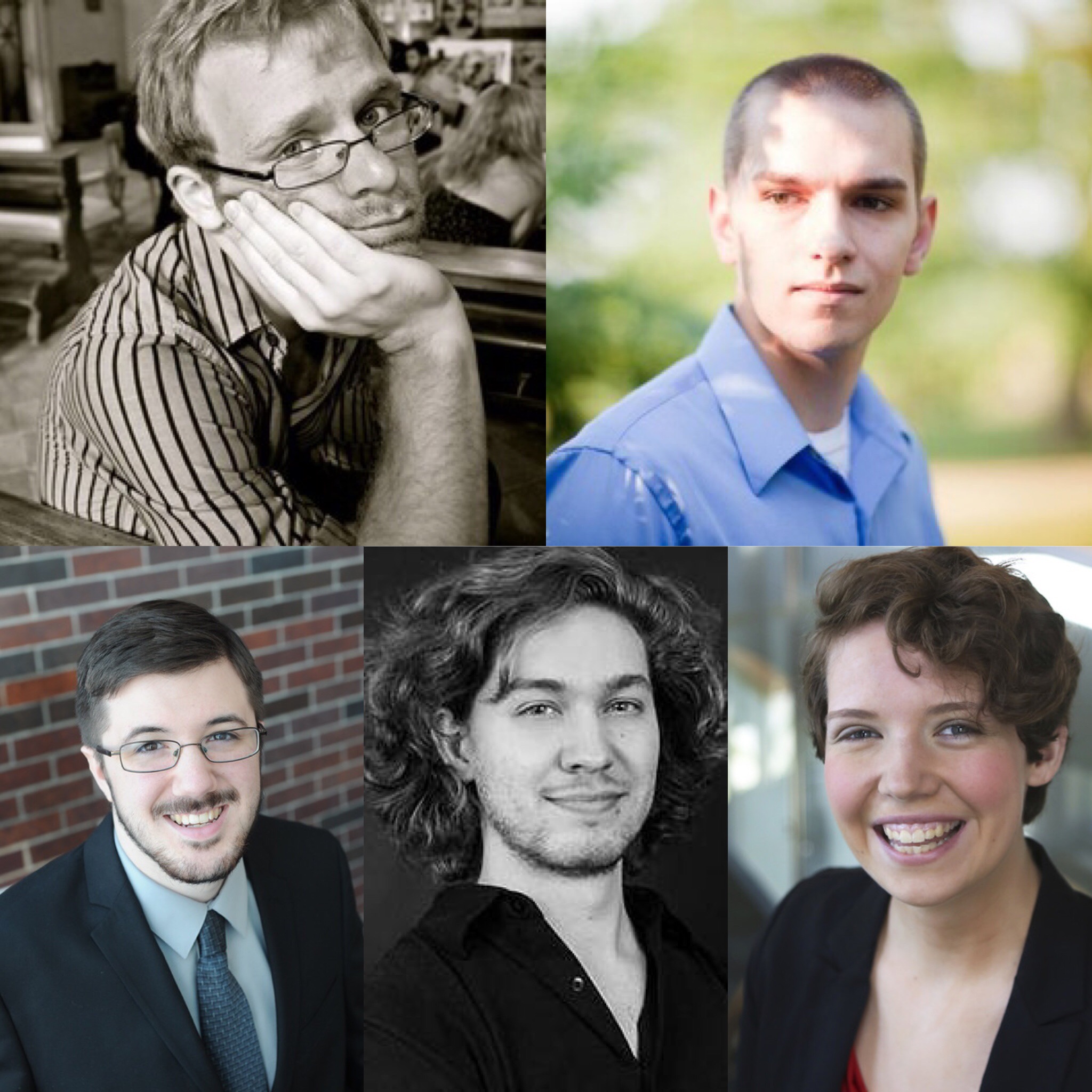 Neil had just finished up his master’s degree at NYU Steinhardt and had worked on video games and short films; his orchestrations were fantastical and his music held a whimsy we thought a lot of bands would be attracted to. While Scott had never written for band before, he had a reputation for gorgeous choral and vocal music, and would bring a fresh perspective to the project. Dylan writes excellently detailed textural music with challenging harmonies, which would be great for directors who were looking for something to fit into a more advanced pedagogical curriculum. Max, veering towards the more neoclassic side, would be a great addition to any standard band program of marches, film music, and transcriptions. My work, Band Together, included both indeterminacy and rhythmic hocketing, providing both a counterpoint to more standard repertoire as well as an intense lesson in ensemble playing. [Ed. note: A page from the score is pictured on the top of this page.] While we hoped band directors would program more than one work from the consortium, we anticipated that there would be at least one work of interest to most directors looking to fill out their concerts.

While we hoped band directors would program more than one work from the consortium, we anticipated that there would be at least one work of interest to most directors.

Originally, we also had another composer involved—one who was known for incorporating elements of jazz fusion and minimalism—but due to unforeseen circumstances, he had to be released from the consortium. This proved to be a tricky scenario to navigate, as there were directors interested in working with him specifically. While we were able to find pieces of equal interest for some directors, others decided to wait until next year to see if this other composer would be available at that time.

This situation made Max and I realize that there was real, widespread interest in a project like this. While we had thought this would be a great way to spend the next year, it was clear that this project had the potential to grow far beyond that. And, even though we could make some educated guesses about how to develop and run a nation-wide consortium, we—quite frankly—didn’t really know what we were doing. Max and I decided we would try to get our alma mater, Luther College, onboard; there were many artistic connections between our project and Luther, so we felt we had a very strong case to get clerical, promotional, or even financial support from the college. We reached out to our former composition teacher Dr. Brooke Joyce to get his opinion on the project and see if he would be interested in being involved.

He was very excited about the project—as far as we knew, there really wasn’t another college or university that provided this kind of opportunity for its composition alumni, and this would be a mutually beneficial collaboration for bands, composer alumni, and the college alike. Skipping over a lot of e-mailing, while a full partnership with Luther was not feasible at this time, they were happy to provide us with other support—printing and shipping our scores, connecting us with bands and directors who had ties to the college, and sending press releases about the project. The Luther College Concert Band even agreed to do a reading session for us so we could send clips of the works-in-progress to potential directors (rather than sending MIDI renderings, which—especially for pieces that have special effects—can be unhelpful or even misleading). With Dr. Joyce as our point-of-contact person, we were able to reach out to the Iowa Composers Forum, which agreed to act as an umbrella organization if we ever grew large enough to start accepting donations. For this season, however, it was simply “money-in-money-out,” so while we will still have the composers report the income on their taxes, we had no need for fiscal agents or to file as an LLC/non-profit just yet.

One of the more difficult tasks was setting up our payment structure in such a way that we could keep the scores affordable for band directors.

One of the more difficult tasks was setting up our payment structure in such a way that we could keep the scores affordable for band directors, yet still be able to fairly compensate our composers. While some of us felt that a sliding scale would be best (charging schools with bigger budgets more money and schools with smaller budgets less), others felt a flat fee for both visits and scores would be the fairest. In the end, we came up with something else entirely. While there was a flat buy-in fee to enter the consortium ($100), we gave schools a discount for each additional score they purchased. The first score would be $35, but if they bought two scores it would only cost them $65 ($35 for the first score, $30 for the second). This meant that any school that performed all of the works would only pay $225 for five brand-new scores and parts. Their buy-in fee also includes customization options, so if the instrumentation doesn’t quite fit their ensemble (such as having a bass clarinet but no bassoons, or having a lot more percussion than what is scored), the composers in the consortium agreed to do reasonable re-orchestrations so that no band was barred from performing a piece due to instrumentation limitations. This also meant that the composers still got a chance to collaborate with directors, despite their pieces being written before directors were contacted. While the schools would still have to negotiate with the composers individually to compensate for visits, Skype sessions, or clinics, this kept the initial investment low enough to allow more rural programs to participate.

With our collaborating forces excited about the project, the structure of the group finalized, and the music well on its way to being completed by the perusal date, we still had one big task left: finding interested directors.