The allure of Austin (like many places I suppose) is partly genuine and partly manufactured. Spending a few days at the New Media Art and Sound Summit and the REVEL Summer Solstice Festival might be all it takes to renew one’s faith in this live, weird town.

The allure of Austin (like many places I suppose) is partly genuine and partly manufactured. Though known for the slogans “Keep Austin Weird” and “Live Music Capital of the World,” (the former coined in 2000 by an Austinite during a radio pledge drive—then in a sad, ironic twist co-opted, trademarked, monetized, and plastered on t-shirts, bumper stickers, and other paraphernalia—and the latter created by the city council over 20 years ago), it’s harder and harder to find the weirdness that used to be on every street corner and, while much of the music is still live, the ratio of one-off cover bands playing for tips to original groups creating new music is not encouraging. However, on occasion the city can still live up to both titles. Spending a few days at the New Media Art and Sound Summit and the REVEL Summer Solstice Festival might be all it takes to renew one’s faith in this live, weird town. 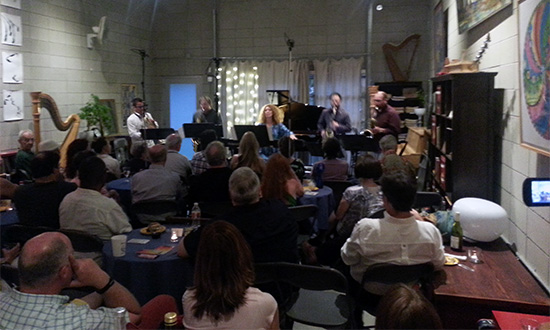 Lisa Cameron’s Canopy of Sound opened the New Media Art and Sound Summit with about a dozen performers playing cymbals in three spots along the running trails around Lady Bird Lake. Cesar Chavez Street runs between the lake and downtown, and the installation started at a tunnel just below, moved along to Opossum Voodoo Pew, up the trail to the Lamar Pedestrian Bridge, and wrapped up at the Liz Carpenter Fountain. Reading sort of like a high Hz drum circle, the work drew the audience in and invited them to actively participate by picking up sticks and joining the fray. With a specialized boutique festival such as NMASS, which is self-described as “a positive alternative to predictable music festival ‘business as usual,’” events such as these serve to announce the presence of the festival to those who otherwise might not have it on their radar.

Non-profit arts organization Church of the Friendly Ghost has taken up the left-of-center curatorial torch and is lighting the way for interesting art, music, and dance presentations. Celebrating its 10th year, CotFG served as the hub for the rest of the festival by partnering with Experimental Response Cinema to present an evening of short films. Highlights included Speechless by founding ERC member Scott Stark, which used images from a mid-20th-century medical textbook superimposed on various textures and backgrounds. Michael Alexander Morris presented a number of works including his most recent, Fires. His work focuses on the technology we use to record our lives and art and the degree to which that technology impacts our experiences. In particular, Fires spoke to declining technologies in a direct manner in that the film stock the artist used was discontinued as the film was being made.

Friday night was a modular synth feast. Thomas Fang led a workshop on modular synth construction and was later joined for a performance by Rick Reed on a variety of vintage instruments and Frankenstein creations. Mickey Delp of Delptronics, Chris and Ian McDowell of Super Synthesis, and Richard Devine (Warp/Schematic) talked shop with participants for around three hours before the night’s performances kicked off. Though the evening’s sets ranged widely—from the mesmerizing drones emanating from Reed’s setup to the looped constructions of Nicolas Melmann to the patching madness of Doug Ferguson—the common thread was developed directly from (often in real time) the instruments that were created by the players.

Sadly, Saturday was the all-day blowout that I couldn’t attend, but such is the nature of festivals. Among the acts were local improvisers Red Ox vs. Cinders and Symphonic Taint, as well as the Chicago-based group Coppice which combined bellows (accordion, pump organ, shruti box) and electronics. A number of Austin heavies including Karla Manzur and Michael St. Clair joined Lauren Gurgiolo to form The Dialtones and performed songs from their latest EP, Calculated Carelessness, against a backdrop of video designed specifically for the music by Angela Chen. Clay Odom, Sean ONeill, and Adam Owens presented TESSERACT  3.0, the third installment of a series for NMASS. Recalling elements of CLOTS, “the Tesseract series are sound and space installations designed to create a heightened sense of the mutability [of] place and time by creating interactive, variable, overlapping fields of sound, space, and reflection.” Next year I’m putting TESSERACT 4.0 on my list.

REVEL came on the scene in Austin a few years back and in that time has produced dozens of concerts in Texas as well as in New Mexico where member violinist Cármelo de los Santos and cellist Joel Becktell are based. Austin-based pianist Carla McElhaney co-founded the group with Becktell in 2008 in hopes of providing an alternative to traditional concert presentation by purposefully relaxing concert protocols and presenting shows in unconventional venues.

Their Summer Solstice Festival was held over three nights (I saw the second evening which occurred on the solstice) in the industrially inspired, improbably named mini artist colony Cobra Studios a few miles from downtown. Newly built a few years back, the colony features spartan live-work spaces for artists of all stripes. So hey, it’s actually chamber music, in a chamber, in somebody’s house. Certainly not unprecedented but not all that common either, and worth noting for the impact it has on the listener. Though I spend a fair amount of time turning over rocks to find new and different music and venues, the vast majority of chamber music that I’ve heard has been presented in concert halls, and the difference at this show was both striking and welcome. This was most pronounced for me with the opening piece, Arvo Pärt’s Fratres, performed by Becktell and McElhaney. This is a work I’ve heard dozens of times and though only a few of those performances were live, none of them were really at all like this one. There was an immediacy that is lacking when the audience is drastically separated physically from the players and placed in an acoustic environment designed to take off any hard edges. The performance was thrilling, not only because of the virtuosity of the players but also because you could hear every bow scrape, chair creak, and breath taken. This immediacy carried over into a wonderful performance of the Arensky Trio in D minor with de los Santos, followed by another personnel change. McElhaney moved to an electric piano as she was joined by the Bel Coure Sax Quartet to form the Zenith Quintet. This new ensemble gave a short but sweet rendition of Piazzolla’s Fugata, which was a perfect example of “leave them wanting more.” This new version of the piano quintet makes for a very attractive ensemble, one I’ve not seen before though I can’t imagine why. Ensemble member Sunil Gadgil indicated that commissions and transcriptions for the group are forthcoming, so hopefully I’ll have more about this group in particular and the configuration in general in the future. 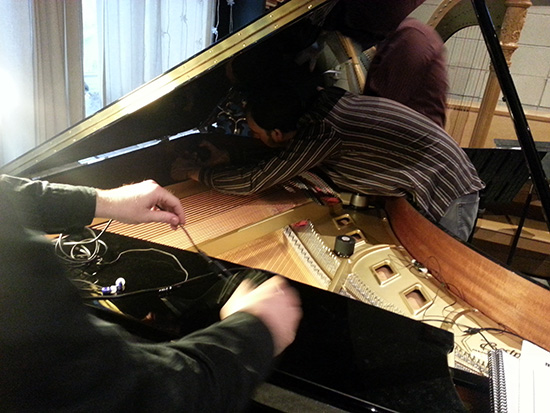 The centerpiece of the evening was Steve Snowden’s Steam Man of the Prairies, a new work for piano, saxophone, and electronics performed by McElhaney and Gadgil. Recently premiered in Portugal, the piece incorporated speaker drivers placed inside the piano which turned the instrument into a giant speaker. Snowden indicated that the fixed media electronics were conceived such that the work could be played through a conventional speaker system, but the sympathetic resonance created when using the internal speaker drivers makes for a richer, more complex sound. Starting with a huge “welcome to my sound-world” strum inside the piano, the piece blossomed as pre-recorded piano samples resonated along with McElhaney’s real-time playing. Breathy, wandering, gossamer lines from Gadgil hinted at an open, somewhat jazzy harmonic sensibility, coalescing into a section of rising and falling echoes with McElhaney vamping underneath a duet between Gadgil and the electronics. An additive section constructed from simple, growing riffs built towards a series of declamatory downbeats, each diminishing in power as the texture broke down leaving the piano skittering across a drone as the sax keened, howled, and ultimately rose into the ether. The final presentation of the evening was a clever remix of Bolero with all hands on deck, the missing snare replaced by key clicks, finger drums on sound boards, and knocking on piano frames.

The two festivals were quite different, but both embodied Austin sensibilities in their own ways. NMASS was “Keep Austin Weird” writ large, a bold presentation of particular viewpoints that, while certainly open to all comers, speaks more clearly to a specific audience. The REVEL Summer Solstice Festival spoke truth to the “Live Music Capital of the World” moniker by presenting three nights of live chamber music in a truly intimate setting. Concert music has always taken a back seat to rock, blues, and jazz in Austin, but when the summer festivals start to out-Austin the spring and fall behemoths, it’s time for the city to take stock and figure out what it means to hear music in this town.