Austin is still a relatively small city, but the ease with which one can find a last-minute replacement for that “contrabassoonist who also owns his own unicycle” part is impressive, and it’s this high concentration of strong, adventurous players coupled with a titanic work ethic that has allowed ANMC to flourish in the last ten years.

“If we need something, we can find it in this town…”

The above quote (overheard at an Austin New Music Coop meeting) is a phrase that describes the attitude of many Austin musicians. Austin is still a relatively small city, but the ease with which one can find a last-minute replacement for that “contrabassoonist who also owns his own unicycle” part is impressive, and it’s this high concentration of strong, adventurous players coupled with a titanic work ethic that has allowed ANMC to flourish in the last ten years. 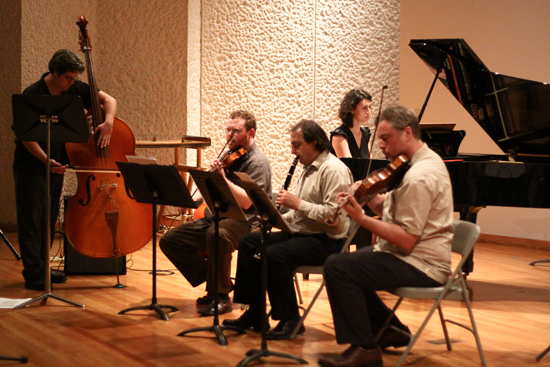 The two-night show celebrating their decade of new music making began with a somewhat theatrical performance of William Meadows’s Loose Atoms for graphics tablet and electronics by the composer. Meadows sat before the audience at a small table stacked with papers. One by one he removed the papers from the pile and distributed them around the table until all he was left with was what appeared to be a thick notebook. He then took out a pen, looked up as though planning the first words of a letter, and began to write. The pen and “notebook” soon revealed themselves to be electronic instruments with samples of Meadows’s speech emanating from the speakers as he moved the pen around the tablet. Various effects manipulated the sound as Meadows held the pen at a variety of angles. The delivery was as compelling and enjoyable as the piece itself, and served well as an opener for the evening. Keith Manlove’s The Becoming Machine II for solo voice, electronics, and video involved a variety of vocalizations that sounded at times like dogs, insects, hyperventilation, and what a contact mic would pick up if it was in your mouth when your dentist asks you to “swish and rinse.” All this audio was run through a four-speaker system that surrounded the audience and was accompanied by a video presentation. Despite the unorthodox sound source and the distinct processing (which, in the hands of a lesser composer, might have been the piece, all bleeps and blorps with no structure) The Becoming Machine II was quite organic and made for a satisfying journey.

Nick Hennies performed Still and Moving Lines of Silence in Families of Hyperbolas by Alvin Lucier. Originally in three parts, this is one of those “pieces that can be played by any number of people at any time,” so on this night Hennies was solo on vibes, his only accompaniment a sine wave. The idea behind the piece is that the notes the performer plays (in this case, Hennies only played one pitch, repeated in several long phrases) should be ever so slightly out of tune with the sine wave such that one might hear the resulting combination of tones. I’m not sure how this is supposed to work with vibes, but I think the following describes how the piece was received:

No gray areas on this one. 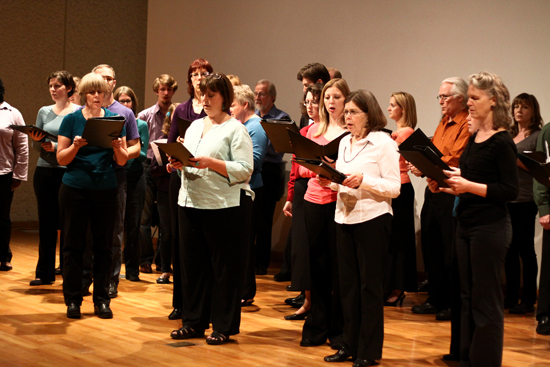 The Viola In My Life was the first of two Feldman pieces of the weekend. Among his first post-indeterminacy era pieces, it was written with absolute control over all parameters in order to outline the gradual crescendo in the viola throughout the piece, which was well represented by violist James Alexander. After intermission, The Great Learning, Paragraph Seven by Cornelius Cardew was performed by Texas Choral Consort and members of the ANMC. Director Brent Baldwin led between 40 and 50 performers who, over the course of the 30+-minute movement, moved around the stage like flocking birds flying in slow-motion. The piece began with an “Om” that spread through the group like a benediction. “In confusion” gradually began to appear among the voices, the first of several short phrases and single words that marked the sections of the work. Among the striking elements of this performance is that TCC is made up of a number of performers who are non-professional community choristers. To watch them become fully invested in (and give a great performance of!) a long and involved 20th-century work was really thrilling.

The second night of performances began with Nick Hennies’s Second Skin With Lungs for five percussionists. Positioned around the audience, the percussionists described circles with their hands on the heads of toms and snares, recalling the sound of rain. This texture was occasionally punctuated by rolls of thunder on bass drums and echo figures played on the snares and toms. 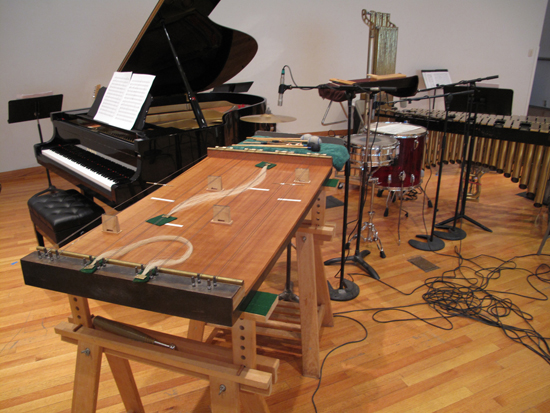 The Owl built by Travis Weller.

The reflective tone of this piece seemed to pick up from the end of the previous evening, and this continued with Travis Weller’s Toward and away from the point of balance. This piece featured the “Owl,” an instrument built by Weller to more easily perform a number of techniques developed on prepared piano. The piece began with a slow tremolo on the Owl (played with hand-held piano hammers) which developed into unison gestures with the violin, viola, and cello. The gestures gave way to a slow, pulsing rise and fall colored with harmonics and overtones. In addition to the hammers, Hennies also used a “loose” violin bow (essentially two handles with a few feet of hair between them) to manipulate the Owl, creating otherworldly textures with the playing of the other performers. Brent Farris’s I apologize, Julius, for judging you seemed in some ways to be a study in instrument resonance. Sounds like screaming whales (yes, whales, not wails) came from the amplified violin and contrabass and mixed with a constant electronic reverberation in the speakers at the rear of the room that slowly moved forward. A melody in the viola built to a climax, its rise hidden by the amplified strings which then abruptly fell into silence. Cymbal rolls and long tones served as a coda and masked a quiet return of the static rising through the texture before rolling to a halt. 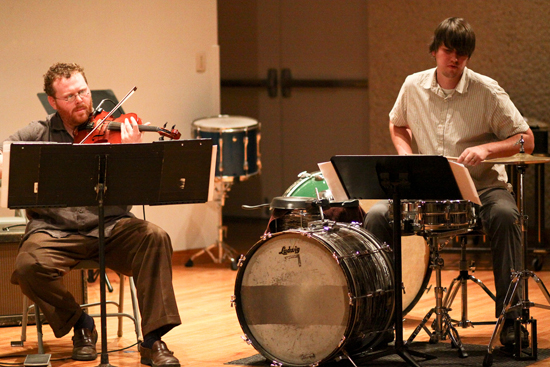 Earle Brown’s December 1952 is among the most well known and earliest graphic scores. This performance featured thoughtful interplay among the performers, but I couldn’t help but wonder what it would have sounded like in 1952 with players who had no background in this type of music. The concert concluded with Arnold Dreyblatt’s Kinship Collapse, an ANMC commission from 2008. A definitive closer, Kinship Collapse features amplified violin, cello, and contrabass (the bass player actually had a second bass fitted with unwound piano string), as well as horn, drum set, and an “electric overtone guitar” with four strings and an unusual fretting system that accommodates Dreyblatt’s particular 20-tone just-intoned system. The piece started with rapid sixteenths traded between the violin and horn which were soon joined by similar figures on the cello and on the frame of the snare. The guitar entered speaking metal overtones as the percussion moved from frame to hi-hats, all leading to an early climax which sounded like a dinner bell joined by high register violin with the horn blowing loud and bullish in kind. Riffs and a strong backbeat took over, and while all musicians were chugging along, I noticed that the vamp seemed to be stretching out a bit longer than seemed right. Just then, Weller hopped up, walked backstage, and came back with a new string to replace the one he’d broken in the fray. How he changed the string so quickly, much less retuned with all that swirling around him I’ll never know, but I’ll tell you it took under a minute and they were back on track seamlessly, bringing the piece to a resounding close.

ANMC put on a great two-night retrospective. This report doesn’t cover all the nuances of intermission conversations (Lucier notwithstanding), the mini-museum of Luigi Russolo’s extinct instruments constructed by ANMC [1], or the wonderful reception afterward during which audience and performers casually interacted. For that you’ll have to come to one of their next shows and experience it for yourself. It’s shows like this that make it so wonderful to be a part of Austin and frankly, who wants to live in some backwater where the contrabassoonist has to rent his unicycle?

1. The ANMC intonarumori (roarers, cracklers, and gurglers) are totally different from the ones Berkeley-based Luciano Chessa built around 2009. In fact, ANMC’s first performance with them was on November 2005. It seems both projects developed 100% independently! The Austin project was the brainchild of NMC member Sarah Norris, pictured here playing a crackler.