An Audience of Performers, Part 1
NewMusicBox
Written By

An Audience of Performers, Part 1

Following up on some loose threads from last week’s post, I’d like to delve a little further into the many-layered and non-transparent relationship between composers, performers, and listeners in music.

Following up on some loose threads from last week’s post, I’d like to delve a little further into the many-layered and non-transparent relationship between composers, performers, and listeners in music.

The model above, proposed by Kendall and Carterette[i], is not the most exciting thing in the world, but it at least gives you a basic idea of how some people think musical intention/expression is transmitted. The composer sets down ideas in the form of notation, which is transmitted to the performer, who interprets that notation and transforms it into sound, which is then perceived/received by the listener. Obviously, not all music works like this, but for the 200-300 years of the common practice period, it seemed to function pretty well. In the mid-20th century, however, the cracks begin to show and this model begins to break down.

It’s impossible to discuss this situation without John Cage, in part because many people blame Cage for it. But the fact is that this disconnect between composers, performers and audience was around long before Cage showed up.[ii] Cage makes it out to be a universal problem, but in retrospect it feels very much like a mid-20th century thing. So what caused this disconnect in the first place? Most obviously, the disintegration of common practice led to a fragmentation of musical languages. While there were still a lot of musically fluent people, they couldn’t speak coherently to each other anymore. There are a lot of ideas in Cage’s music that stem from this crisis—indeterminacy, chance procedures, Zen, removing ego/intentionality, silence—but I want to focus on one specific way he reconfigured the composer-performer-audience relationship.

BT is one of the most unusual notations in the score of Cage’s Concert for Piano and Orchestra (also called Solo for Piano when unaccompanied), written for his friend, the virtuoso pianist David Tudor. Cage’s instructions state that “notes give place of performance with respect to the piano,” but the drawing shows the outline of two grand pianos and a collection of points that, for the most part, do not intersect either piano. Cage presents a kind of impossible puzzle for the performer that has no optimal solution; Tudor’s answer is nonetheless ingenious and comprehensive. Tudor interprets those points which intersect the curve of the first piano as effects on the strings or body of the piano, points which come close to the keyboard of the second piano as effects on the keys, and points away from both as auxiliary sounds, non-pianistic in origin. The vertical axis determines their placement in time; the horizontal axis determines their pitch.

Cage certainly wasn’t the only one to re-direct his energies in this way; Earle Brown’s December 1952 (from FOLIO) is another example of graphic notation used to re-invent the role of performer. 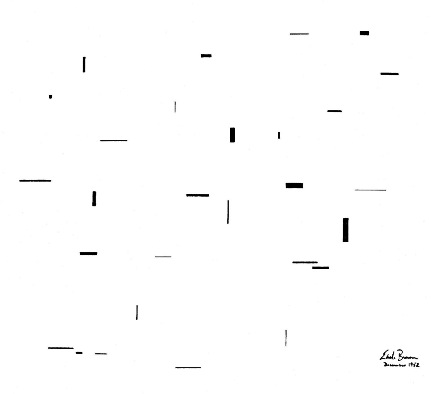 Like Cage, Brown provides cryptic instructions to the performer, who “must set this all in motion (time), which is to say, realize that it is in motion and step into it…” (One interpretation suggested to me involves moving into the score, as if it were a 3-dimensional star field.) In some sense, this piece does not even have to be sounded to be performed. Its resemblance to visual art suggests that the viewer of the score can simply activate it with the eyes and the brain.

Cornelius Cardew’s Treatise is in many ways the culmination of this idea, a 193-page graphic score with no explicit verbal instructions whatsoever. Cardew imagined it as an attempt to escape from the rigidity of serial music, and encourage improvisation amongst avant-garde musicians. 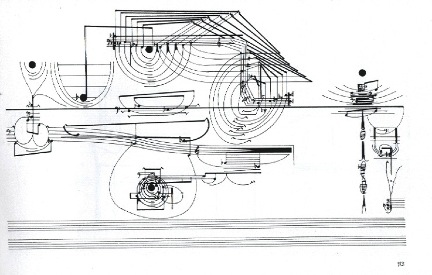 At the same time, Treatise also expresses most succinctly what is problematic about the performer-as-audience, and Cardew renounced the piece later in life. His repudiation of Treatise is clothed in Maoist political ideas, but the performer-audience relationship is at the heart of the problem: “In performance, the score of Treatise is in fact an obstacle between the musicians and the audience.”[iii] In other words, the fact that improvising musicians had to relate to an audience through a particular artifact, rather than directly through their own musical intentions, felt utterly counterproductive to Cardew.

It’s difficult to imagine where to go from Treatise. It seems like a pinnacle, a dead end. In fact it’s not quite, and I’ll talk about why next week. (Some of you may already have guessed from some of the hints I’ve dropped.)

ii. I’ve quoted this before, but why not repeat it: “Music doesn’t really communicate to people. Or if it does, it does it in very, very different ways from one person to the next… No one was understanding anybody else. It was clearly pointless to continue that way.” John Cage, in Kostelanetz, Richard, 1988, ed. Conversing with Cage. New York: Limelight.