Rob Deemer’s post last Friday about the seeming foolhardiness of writing for contrabass trombone struck a chord with me the moment I read it since I’m often incapable of compositional practicality. However, as the weekend progressed, that chord resounded again and again as I kept being confronted with the seemingly impossible—amazingly impractical pieces of music performed exceptionally well to huge, appreciative audiences. 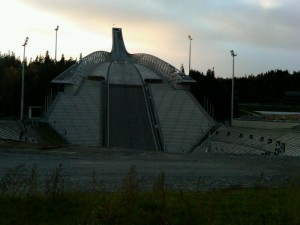 Sometimes a piece of music can feel like as big a challenge as jumping off the Holmenkollen Ski Jump in Oslo, Norway (a pretty frightening proposition)

Rob Deemer’s post last Friday about the seeming foolhardiness of writing for contrabass trombone struck a chord with me the moment I read it. I have frequently been incapable of honing my own compositional inspirations to conform to what is practical. Admittedly, I have paid a price for the error of my ways. To this day works like my 1997 Kenneth Patchen settings scored for countertenor, clarinet, theremin, banjo, kalimba, and trombone, as well as my 1982 opera using 31-tone tuning, remain unperformed. But I would counter folks who think I’m totally illogical for writing such music by saying that when a performance of a seemingly impossible piece does happen—and it does from to time to time—my gratification has been even greater than what I’ve felt after performances of more easily achievable efforts.

However, as the weekend progressed, the chord that Deemer struck resounded again and again as I was twice confronted with amazingly impractical pieces of music that were exceptionally well performed in front of huge, appreciative audiences. On Saturday night, I heard a dazzling performance of Arthur Honegger’s fantastically unfeasible Jeanne D’Arc au bûcher, a work which I had never previously heard. Although Honegger wrote this evening-length oratorio in 1935, it took until 1938 for the work to receive its first public hearing since it requires a total of two speakers, eight solo singers, five choruses, and an ondes martenot soloist in addition to a large symphony orchestra. At Carnegie Hall, where I finally heard it, the stage was filled to the brim. It felt like a once-in-a-lifetime event, even though Marin Alsop, who led the Baltimore Symphony in this mind-blowing, nearly sold-out concert, led a performance of it with the London Symphony Orchestra earlier this month. After I got home and did some digging I discovered that—while it’s admittedly nowhere close to being standard repertoire—Jeanne D’Arc au bûcher has had a longer shelf life than most contemporary compositions. There are currently at least six different recordings of it in print plus, in 1954, Roberto Rossellini made a motion picture using the score starring Ingrid Bergman, which is also readily available on DVD. How many other pieces of music, practical or otherwise, can boast that?

Then on Sunday afternoon, I caught the final performance of the American premiere run of Peter Maxwell Davies’s Kommilitonen! at Juilliard. The new opera features three simultaneous plotlines and, in addition to the full orchestra in the pit, there are frequently musicians onstage—everything from a jazz trio and a traditional Chinese erhu soloist to a full marching band. Anne Manson, who conducted the performance, and the Juilliard student performers, dashed it off effortlessly, although again this is the kind of piece that on paper might at first glance appear undoable. 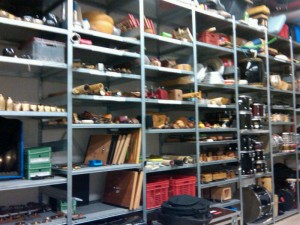 If you build it, they will come! Pictured above is a small section of the musical instrument collection of the Köln-based new music ensemble musikFabrik which I visited in October 2010; they and many other groups all over the world are willing and prepared to perform just about anything.

That both performances took place over the same weekend made me start to think that maybe wildly impractical ideas are not so impractical after all. Then I started to realize that the performance experiences that have burned themselves most indelibly into my brain have largely been of works that nay-sayers would claim are not mountable. Attending outdoor performances of Glenn Branca’s 100 electric guitar-strong Symphony No. 13 (Hallucination City) and Wendy Chambers’s One World of Percussion, a work requiring 50 musicians performing on 500 instruments, are still my most enduring memories of the World Trade Center. Over the past year I was equally blown away by John Luther Adams’s Inuksuit and Georg Friedrich Haas’s limited approximations for an orchestra plus six pianos each tuned a twelfth of a tone apart (which ended the 2010 Donaueschinger Musiktage). And I’m still trying to figure out a way to get to Halberstadt, Germany to hear part of the ongoing performance of John Cage’s Organ2/ASLSP now in its 10th year; luckily I still have the rest of my life to experience that one.

The fact that none of these performances could ever be an everyday occurrence (except Organ2/ASLSP for the hopefully tolerant residents of Halberstadt) is what makes them such extraordinary things to witness and to cherish. Perhaps therein there’s even a definition of—dare I type it—“great” art somewhere.