The Spirit of ’76 finally touched down at the San Francisco Opera with the first local performances of John Adams’s Nixon in China, a quarter century after the work’s creation. 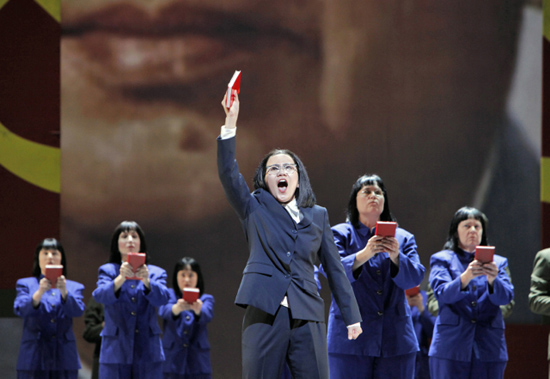 The Spirit of ’76 finally touched down at the San Francisco Opera with the first local performances of John Adams’s Nixon in China, a quarter century after the work’s creation. Just prior to the work’s 1987 premiere in Houston, there had been a reading in San Francisco with piano accompaniment at the Herbst Theater, a recital hall, but this marks the first time it has been staged in the Bay Area, which has been Adams’s home for more than 40 years. The work was commissioned by David Gockley when he was general director of the Houston Grand Opera. With Gockley now at the helm of the San Francisco Opera, co-commissioners of Adams’s Doctor Atomic and The Death of Klinghoffer, this appearance of Nixon in China feels like a missing puzzle piece being put into its proper place.

Most followers of contemporary American music are probably familiar with the basic background behind Nixon, which has received multiple productions and two recordings. The opera—conceived by director Peter Sellars, librettist Alice Goodman, and Adams—is inspired by Nixon’s 1972 trip to Beijing to meet with Mao Tse-tung and China’s Premier Chou En-lai. In the course of three acts during which the line between reality and fantasy becomes increasingly blurred, five distinct character portraits emerge: of Nixon, Mao, Chou, Pat Nixon, and Chiang Ch’ing, or Madame Mao.

The opera contains some of the most memorable, charming, propulsive, lyrical, witty, and fresh writing of Adams’s career but, even so, 25 years is enough time to have passed that it does have the sound of a different era. Adams recently said in an interview with the San Jose Mercury News, “I was surprised by how minimalist the music is. When I started opening the score again, I hadn’t really looked at it or conducted it in 10 or 15 years—and compared to what I now do, I was shocked by all those bald arpeggios, bar after bar! It’s a kind of writing I would never do now.” 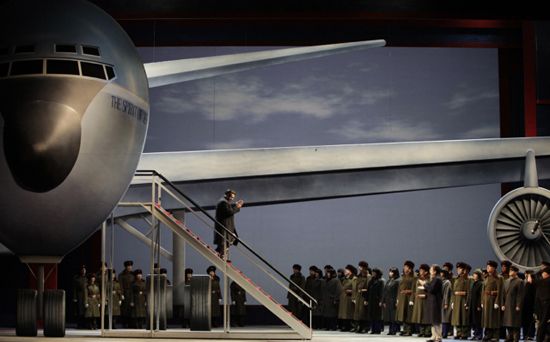 But for those who haven’t heard Nixon before, the music itself remains surprising and shocking. I had the great fortune of seeing it with a group of traditional opera-goers who had never heard a note of the piece and was reminded that, despite our easy access to recorded material nowadays, live performances of major works like this are essential if they are to have an impact on a local audience. As is my custom, I attended the June 17 performance on a standing-room ticket; just before the start of the performance, a stranger generously offered me an empty seat in her box. My box-mates were in their 50s, more or less contemporaries of Adams, Sellars, and Goodman, and knew very little in advance about what they had come to hear. But it was particularly gratifying to me that, at the first intermission, it was immediately apparent that no explanations or apologias were necessary: these first-time listeners were thrilled by the energy of the landing of Air Force One in the first scene; they grasped the banal yet complex portrayal of Nixon that develops from him singing “News” twelve times in a row; they accepted the ambiguities of the language and the action. Nixon was in a language that was immediately comprehensible to them, and by the time Madame Mao sang her final “Book!” my hostess declared that she could see herself becoming a Nixon groupie.

Of course this reaction wouldn’t have been triggered without strong performances by all the principals and the orchestra and chorus, under Lawrence Renes’s baton. (The short preview video above gives a sampling of the cast singing all the greatest hits.) Baritone Brian Mulligan’s Nixon was physically and vocally youthful and vibrant, sung with a warmth and lyricism that prevented the character from ever slipping into caricature. The punishingly high part of Mao was sung securely and admirably by tenor Simon O’Neill, with a stridency entirely appropriate to the figure he was portraying. But the person that everyone will likely remember when they recall this performance is the petite 29-year-old Hye Jung Lee, just two years out of the SF Opera’s Merola young artists program, who completely took over the stage from the moment she declared, “That is your cue!” and shot Kissinger. “I am the Wife of Mao Tse-tung,” she fearlessly announced, and one could easily see how millions of people would “hang/ Upon her words” through Lee’s powerful and astonishingly precise performance.
* * *
That same weekend, across the bay in Berkeley was another performance of a John Adams work in a much more modest venue. The Friction Quartet, a group of young musicians who have all studied at the San Francisco Conservatory of Music, performed the second movement of Adams’s String Quartet as part of a triple-bill at the Subterranean Arthouse, a small (above-ground) “community art space” near the UC Berkeley campus. (You can hear part of the Friction Quartet’s performance of the Adams quartet at the conservatory’s Hot Air Music Festival on YouTube.) 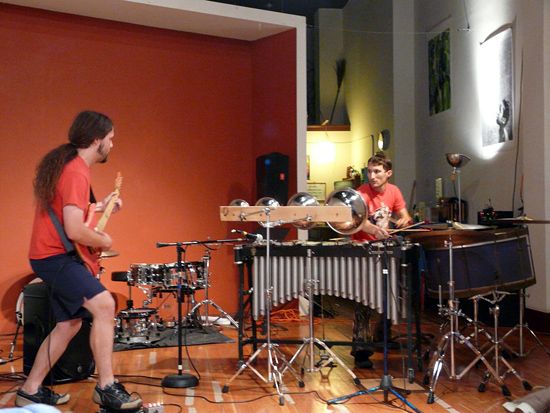 The concert was organized by composer Brendon Randall-Myers, who was leaving the next day to move to the East Coast, and was a manifestation of the enthusiasm for new music that is coming out of the conservatory right now. The other performers, guitar/percussion duo The Living Earth Show and members of the chamber ensemble Nonsemble 6, are all recent graduates of SFCM and approached this program of contemporary music—which also included two works by Randall-Myers, a piece by Timo Andres that was also performed at this year’s Switchboard Festival, and works by Adrian Knight, Kevin Villalta, and Frederic Rzewski—with exuberance and a complete lack of pretense. 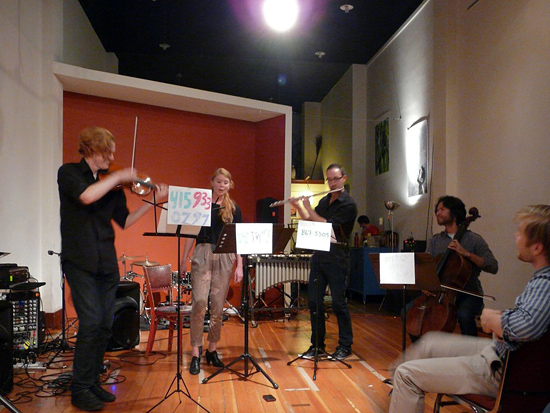 This was best exemplified by Nonsemble 6’s performance of a section of Rzewski’s Les Moutons de Panurge, which is “for any number of musicians playing melody instruments and any number of nonmusicians playing anything.” According to Rzewski’s performance instructions, “nonmusicians are invited to make sound, any sound, preferably very loud, and if possible are provided with percussive or other instruments.” Nonsemble 6’s solution for this was to write out their cell phone numbers and tape the papers to their stands. They then encouraged the audience members, many of whom seemed to be friends and colleagues, to call and text the numbers during the performance so that the rings would allow the nonmusicians to participate.

As it turned out, the ringtones weren’t loud enough to register, so the audience switched to other methods of making very loud sounds, including, but not limited to: stomping on the ground; snapping a leather belt; taking shoes off and pounding them on the walls; clapping; and making vocalizations that started as good-humored “boo”s, which then transformed into “baa”s. In the end it felt more like a raucous jam session than an actual performance of Moutons, but one couldn’t deny the infectiousness of the joyful abandon in their music-making.