Before his 18th birthday, Aaron Parks had released four CDs. After a five-year stint with Terence Blanchard and now 30, he participates in a wide array of musical endeavors, from his own polyglot material to guesting on an indie-rock album and collaborating with Korean-born vocalist Yeahwon Shin. In everything he does, he is fully present.

Video presentation and photography by Alexandra Gardner
I first became aware of Aaron Parks when he was still a teenager. His mother handed me a CD featuring his trio at a gathering of the Jazz Journalists Association.  Called The Promise, the disc featured two originals and a bunch of jazz standards. Although listening to the recording was hardly a life-changing experience, Parks’s piano playing was already extraordinarily sensitive and his improvisations had a remarkable fluidity that sounded as if he had a lifelong immersion in this music. This seemed odd given that he hadn’t lived that long up until that point and that he grew up outside of Seattle in the final decade of the 20th century, a time when most of his contemporaries were into grunge rather than straight-ahead jazz.

But Aaron Parks, who recently turned 30, was not a typical kid. He was playing both jazz piano and classical bassoon by age 10. At age 14, he skipped high school to enroll at the University of Washington and, by the age of 17, he was named a National Merit Scholar and a Presidential Scholar in the Arts. Soon after that, he transferred to the Manhattan School of Music, where he studied with legendary pianist Kenny Barron and continued to record albums with groups he led, one a year.  Before his 20th birthday, he had released a total of four CDs, the most impressive of which was The Wizard, which consisted exclusively of original material performed by a trumpet/alto sax/piano/bass/drums quintet.

“There are a few of the songs from that record which I still really like,” said Parks when I spoke to him last month at his Brooklyn apartment. “In particular I really like ‘Planting Flowers’; that’s even in my current repertoire. I just pulled it out to give it a go again. [Ed. note: It was part of the quartet set he played at the NYC jazz club Smalls on April 2 and 3.] I feel mostly disconnected [to that music], but I look back every now and then. I smile to myself listening to those old records.  … In retrospect, sometimes I feel a little bit goofy about having all of those records out there. The whole child prodigy thing can be dangerous. When everybody around you is sort of telling you [that] you’re special, you’re like, ‘Oh, well, maybe I need to be special.’ It makes you feel like you can’t just be. You can’t just be a person. You need to live up to this idea of the story others have been telling you.”
So despite his very clear abilities and his artistic drive, he decided to sit in the back seat for a while after the fourth of these albums, Shadows (2002), which included a cover of the Radiohead song “Knives Out.” “I knew that I wasn’t ready,” Parks admitted. “I knew that I wanted to get some real experience. I could have kept on going and doing stuff as ‘the young piano guy,’ but I knew that I needed some more depth.”

What wound up happening is the stuff of legend. Trumpeter and composer Terence Blanchard, whom Parks had met only briefly a year earlier, called him up and invited him to attend a live XM radio show moderated by Wynton Marsalis on which Blanchard was scheduled to perform with a group that also featured pianist Chick Corea. Parks skipped his Afro-Cuban Big Band rehearsal at MSM and rushed downtown. It turned out that Corea couldn’t make the gig, so Blanchard asked Parks to play with the group. He wound up being Blanchard’s pianist for five years, touring the world and releasing three albums on Blue Note, among them the 2008 Grammy Award-winning A Tale of God’s Will (A Requiem for Katrina). Although he remained a sideman, each of these albums featured one of his own compositions.

“Terence was really interested in compositions from all the band members,” Parks remembered. “That became one of the hallmarks of that band. Most of the guys wrote music for it, carrying on the tradition of Art Blakey mentoring young musicians. That’s a trip because Terence is such a heavy composer.” 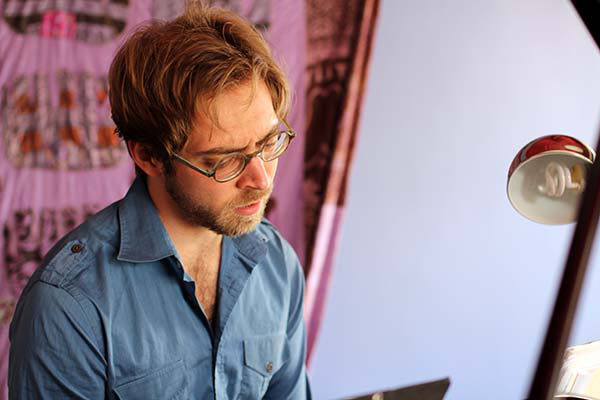 A pensive Aaron Parks at the piano.

One of the pieces Parks contributed to the repertoire of Blanchard’s group was “Harvesting Dance,” an unusual tune largely derived from the harmonies of Arvo Pärt Fratres. “I like these chords so I think I’ll take them,” Parks acknowledged. “I love Arvo Pärt; he’s one of the deepest. I listen to whatever crosses my path and whatever I feel some sort of connection to. I don’t really make distinctions between genres.”

That open-mindedness has led Parks to participate in a wide array of musical endeavors in the years since he left Blanchard’s outfit, working in groups led by musicians as diverse as guitarist Kurt Rosenwinkel, drummer Kendrick Scott, saxophonist Justin Vasquez, vocalist Gretchen Parlato, and Danish bassist Anders Christensen in whose trio he played alongside the late Paul Motian. Parks even appears on the indie rock album Dreams Come True, the debut studio recording by CANT, a group fronted by Grizzly Bear member Chris Taylor. But perhaps the most unusual project Parks has been involved with thus far is a collaboration with South Korean-born vocalist Yeahwon Shin and accordionist Rob Curto combining traditional Korean melodies and free improv; they are about to embark on a nationwide tour in support of their debut album Lua ya, which was released last November on ECM. Almost anything is fair game:

I like music and I like songs and I like sounds. … I like to put myself in situations where I’m a little bit out of my comfort zone. I do also want to have some sort of entry point to the music, though. I want to be challenged all the time, but I don’t want to only be challenged in my head. So music which is purely cerebral, or feels that way to me, I don’t tend to have quite as much of an attraction towards. But if it’s cerebral and I can dance to it, or it makes me feel something, there’s more of a chance.

All of these projects have also fed back into his own creations as a composer and bandleader in his own right.  Shortly after leaving Blanchard, Parks recorded an album of all originals for Blue Note called Invisible Cinema for which he assembled a quartet of guitar, bass, and drums in addition to himself (here not only on piano, but also on glockenspiel and mellotron). “Harvesting Dance,” the aforementioned Pärt-inspired piece, made a re-appearance here but in a completely new guise.  Another one of the album’s tracks, “Nemesis,” showed how deeply he had internalized the ambiguous harmonic language of Radiohead by that point. All in all, this first album as a leader in six years (since the last of his four youthful efforts) was worlds away from the mostly straight-ahead approach of his teens.

“I was pretty consciously trying to make something that didn’t have traditional jazz rhythms,” Parks explained.  “I wanted to try to find some sort of rhythm of our time. At the time I was making that record, I had been scouring blogs for tracks by indie rock bands and was hearing all these new textures and different ways of structuring songs aside from a typical jazz thing. People had been doing that for a long time in the [jazz] scene, but for me it was pretty much brand new and I was just discovering it.”
It would be another five years before an additional two albums got released under his name, two albums that are almost polar opposites. One, Alive in Japan, was simply a lo-fi recording of a December 2012 trio date at a club in Japan combining originals and standards that harken back to his roots. He has made it available for free download on Bandcamp where he states, “If for some reason you feel compelled to contribute something, consider donating to a charity in Japan (or elsewhere in the world), or buying someone else’s record with the money you didn’t spend on this one.” The other, Arborescence, is an introspective series of solo piano improvisations recorded in the extremely resonant Mechanics Hall in Worcester, Massachusetts, in 2011 and released two years later on ECM, a label treasured by audiophiles for its pristine sound.

“I was recording it with a friend of mine just to see what happened,” Parks acknowledged.  “They were just things that happened. We had the recording equipment up and we were there for a few days. I did all sorts of stuff while I was there: I played some of my pieces, I played standards, and I played a bunch of these improvisations—listening back to it, those were the things that felt the most as if they were being inhabited, like I was fully present for them.”

For Parks, being present in the moment of performance is ultimately more important than creating a great original melody or playing it back perfectly. It’s something he tries to do in whatever context he is put in. And it’s something he wishes more musicians would be given the opportunity to focus on in today’s overextended working environment:

One of the problems with the scene today is everybody is so busy doing so many different things.  Most people are pretty proficient at doing a lot of things; you can give somebody some music and they’ll read all of the notes and it’ll be great.  But then they’re onto the next gig. I don’t want music to just be information like that. …  There’s a focus on being an individual; you’ve got to do your own thing at all costs, being original so to speak. But they focus on that one particular side of what original means. Originality is not only creating something new, it’s also having authentic presence—being fully present in the interpretation of what you’re doing. … I want people who can play a part—inhabiting it fully—and make me believe a melody. I don’t want you to play the melody; I want you to sing it to me. That’s a rare thing. 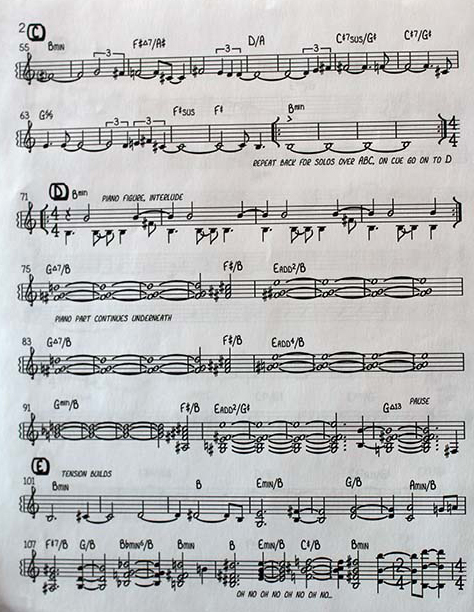 An excerpt from the leadsheet for Aaron Parks’s composition “Siren” Copyright © 2009 by Aaron Parks and reprinted with his permission.