This is how I remember Fred Ho: brazen honesty, sharp-tongued wit, vibrant virtuosity in every area of life. I was one of the lucky ones: I got to look into Fred’s eyes and tell him I love him one last time. 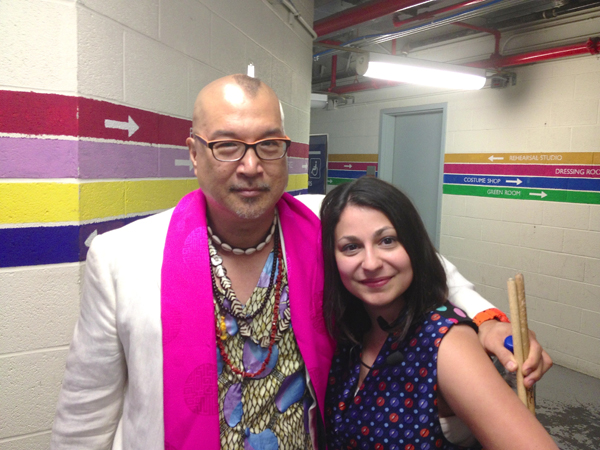 Fred Ho with Marie Incontrera on his birthday, August 10, 2013

I had my very first lesson with Fred Ho on March 9, 2011, in his sunny Greenpoint apartment. He was in year five of his eight-year cancer war, but he came across as strong, sturdy, and stoic. I presented him with my best work, a bound score and CD of my lifeblood, and settled back to wait for the critique. I didn’t have to wait long; Fred listened to about thirty seconds of it before flipping the score shut and handing it back to me with one word.

This is how I remember Fred: brazen honesty, sharp-tongued wit, vibrant virtuosity in every area of life. It was that moment that I pledged to know Fred for life, however long or short our time might be together. That day was the first of many lessons; week after month after year I would come to sit at his kitchen table and lay bare my heart and soul, opening myself up to the pain of self-reflection and growth that comes with becoming.

“You write too quickly,” Fred told me once.
“Take more risks,” he said constantly.

Fred gave me work that would keep me up until three in the morning, high on aural hallucination. Write 50 two-, three-, or four-measure ostinati in odd meters, all starting on the low E of the bass. Write an opera and produce it yourself. Collaborate with me on an arrangement and conduct my band. Copy this score and tell me what you’ve learned. In this, I was more apprentice than student, and he was more family than friend. Our time together bridged the waters of music and delved into politics, healing, life, and death.

Fred has a way of creating family wherever he goes. He had no children of his own, but his sons and daughters of musical revolution gathered around him unrelentingly through the worst of it. As we coordinated bringing Fred food on Christmas Eve and argued like siblings over the best way to feel six and a half beats, I realized that family is not always blood but a collective heartbeat. I wonder if Fred knew this all along, raising us through demonstrations of the toughest love into littler versions of his own spirit, holding the next successes just over our heads so that when we finally catch them, we are just a tiny bit older and wiser.

I like to remember Fred marching around a church with his saxophone quartet, the sound filling the room and filling my soul. The music lifts me up, above life and death and the quicksand of my grief, and I experience for the first time the instance of redemption in music.

“Black music is about the redemption of the soul,” Fred says as we sit at his kitchen table. “It’s about turning your pain into power.”

If nothing else, Fred has done exactly this with his life. Fred’s power has come from his transcendental suffering: he fights radically against injustice, fights cancer with a big band, infuses his students with virtuosity through strategic boot camping. I endure the latter willingly and gratefully, absorbing the chord progressions and musicological essays into the quick of my being. Fred’s teachings are in my blood, and I carry his politics and bass lines in the pockets of my soul so that they are with me wherever I go.

I like to remember Fred on our trips to the thrift store, poring through the bins of clothing for the next colorful treasure. I like to remember him in his handmade neon green suit, laughing with friends at a book release party after his 2011 surgery left him without a bladder or bowel—and, for a little while, without cancer.

I like to remember Fred, five days post-heart attack, on the day of a snowstorm that threatened to shut down the city, leading his big band as if his life depended on it. In hindsight, I recognize that it absolutely did.

I like to remember Fred as he stood on a stage for the very last time, greeted by a standing ovation, obliterating every register of his baritone saxophone like nobody’s business. Terminal, six months to the day before he died.

It’s hard to think of Fred without a new melody coming from the pencils he kept sharpened at his desk. And yet, as time passed, Fred’s thoughts became preoccupied with survival rather than beauty. When Fred could no longer manage it, he handed over his legacy like the keys to a kingdom and I am tasked with understanding the complexity of an entire life, of filling the shoes at his podium. As I humbly adjust to my new role, I begin to see Fred’s 56 short years for what they were: brilliant, and enough to fit six lifetimes.

I see Fred’s final big band work, Grace of the Guerrilla, My Love, as a trajectory of Fred’s epic and unique life. It is drum-cadenza-for-the-ages into altissimo-saxophone-virtuosity into acrobatic-trumpeting-dream-sequence into a final groove in six-and-a-half time, complete with a tongue-in-cheek quote that I affectionately call “Mission Impossible on steroids” and building into collective solos that end on a high note. It is a mammoth and monumental masterpiece that is at once cacophonous and groovy, easy to love and difficult to understand. It goes out much like Fred did: with a bang, not a whimper.
To have known Fred is to know how to end one’s life beautifully: staring death in the face unafraid, surrounded by love that has been both born into and chosen, sharing with the world as much beauty and justice as is humanly possible. I was one of the lucky ones: I got to look into Fred’s eyes and tell him I love him one last time. And yet no matter how well Fred prepared us, he goes gracefully before we are ready for him to, leaving us with the imprint of his spirit upon our hearts.

*
Fred Ho passed away on the morning of Saturday, April 12, 2014, in his home in Greenpoint, Brooklyn, ending an eight-year battle with metastatic colorectal cancer. He is survived by his mother, Frances Lu Houn, two sisters, Florence Houn and Flora Houn Hoffman and their families, and his companion, Melanie West. He leaves behind a legendary body of musical work; several books he either authored or co-edited about political theory and the cultural politics of music; a revolutionary political movement, Scientific Soul Sessions; two big bands; and a distinct Afro-Asian aesthetic.
There will be no funeral; Fred will be cremated and his ashes will be spread over the sea of Kauai, Hawaii, where he will swim forever among the coral reefs. A memorial is being organized for a later date and will be held at BAM Cafe in Brooklyn. A celebration concert with the Eco-Music Big Band will be held later this month on April 23, 2014, with concerts at 7:30 p.m. and 9:30 p.m. at Ginny’s Supper Club on 310 Lenox Avenue in New York City.
*
[Ed. Note: To read, watch and listen to a conversation with Fred Ho for NewMusicBox (originally recorded on October 8, 2008), click here.]