The ubiquitous John Cage centenary tributes continued in the Bay Area this month with a performance of Erik Satie’s Vexations, 49 years after the first performance famously organized by Cage. 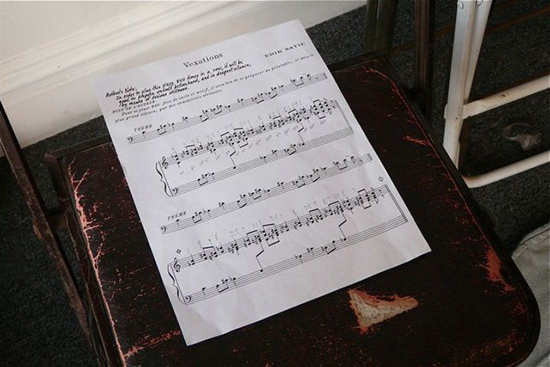 The ubiquitous John Cage centenary tributes continued in the Bay Area this month with a performance of Erik Satie’s Vexations, 49 years after the first performance famously organized by Cage. A free event presented by the Berkeley Arts Festival, it began on the evening of September 8, and was one of two West Coast performances that weekend. (The other was in Santa Monica, presented by Jacaranda Music.)

Ideas are one thing and what happens is another. – John Cage

As many NewMusicBox readers will know, Vexations poses some unusual logistical challenges. The score (presumably intended to be played on piano) consists of a short 18-note melody with two harmonizations, a tempo marking of “Very slow,” and a note that indirectly suggests that the work be played 840 times. In reality this results in a 20-hour performance, give or take, depending on how “Very slow” is interpreted. The performance, organized by Cage on September 9–10, 1963, featured a rotating cast of pianists playing for 20 minutes each. This month’s Berkeley performance had 19 pianists, each playing for an hour, plus some shorter reprise sets in the early morning and at the end to fill the remaining slots. 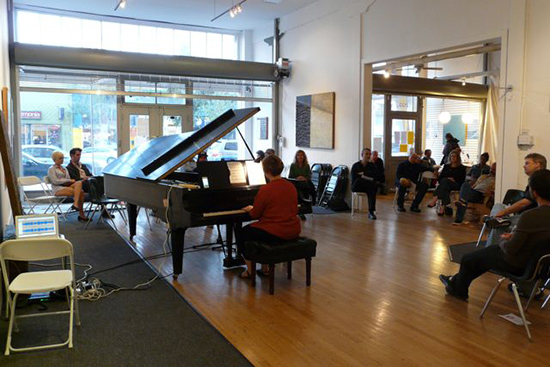 Hadley McCarroll performing between 7 and 8 p.m.

A couple dozen of us were present when the marathon endeavor got underway, promptly at 6 p.m. The performance took place in a modest, empty commercial space in downtown Berkeley which had been outfitted with a piano and plastic folding chairs. The Berkeley Arts Festival is more of an ongoing concert series than a time-specific festival, and utilizes unoccupied storefronts for their performances. (Their current space is billed, for example, as being “right next to Ace Hardware.”) The large windows looking out on University Avenue allowed for the music to be heard on the street, and for street sounds to enter the performance space in return.

Given the paucity of performance instructions in Satie’s score—there are no dynamic, articulation, or phrasing markings—the interpretive possibilities are limitless, and the first three performers (Jerry Kuderna, Hadley McCarroll, and Joe Lasqo) availed themselves of the broad range of techniques they had at their disposal to differentiate each iteration. Kuderna’s were alternately languorous and insistent, with extreme volume changes and varied use of the sustain pedal. McCarroll worked with variations in articulation and speed; at one point towards the end of her hour, after the sun had set, she played an exaggeratedly elongated version and a very swimmy version where the sustain pedal was engaged throughout. Lasqo took liberties with even the rhythmic values of the written notes, allowing rubato in each phrase and inflecting his performance with a jazz sensibility. 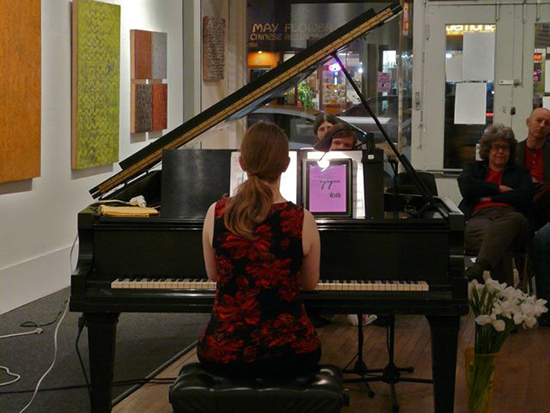 Kelsey Walsh, with the iPad keeping track of how many times the piece had been played.

By the time Kelsey Walsh slid onto the bench at 9 p.m, her straightforward, unvarying approach seemed a surprising and radical choice by comparison. It also allowed for a completely different relationship to the piece from the audience’s perspective. The three performers before her explored as many facets of this tiny gem as they could and, in so doing, explored aspects of their own musical and emotional selves to uncover what they could bring to such a small amount of material. But by not doing any of this excavation, Walsh instead handed the audience a steady point to meditate on, putting the exploratory work into each listener’s hands and showing that the least varied could in some ways be the most rewarding. 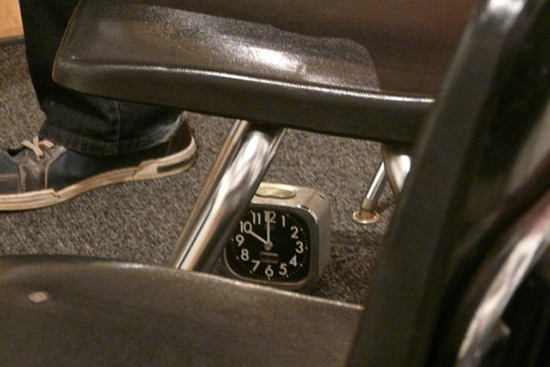 The omnipresent timepiece that controlled the hourly changing of the guard

I confess that I had to head home sometime after 10 p.m., to attend to such mundane concerns as flossing and feeding the cats. The space was well populated when I left, with some audience members already making use of the blankets and camping mats that had been set out for those who were in it for the long haul. When I returned around 6:30 a.m., there were about ten bleary-eyed diehards there, several of whom were performers.

It’s useless to play lullabies for those who cannot sleep. – John Cage

Just after daybreak, Joseph Colombo presented a forte version with the sustain pedal engaged that rang out like a carillon. As a morning coffee soundtrack, Vexations is curiously unsettling. A companion who joined me for about 3 hours of the event, on and off, said that at one point he felt himself becoming angry at the performers for continuing to play. And indeed, the tritone-laden Vexations is vexing: on my way to Berkeley that morning, I was disturbed to discover that I wasn’t able to accurately hum the theme despite having listened to several hours of it the night before. 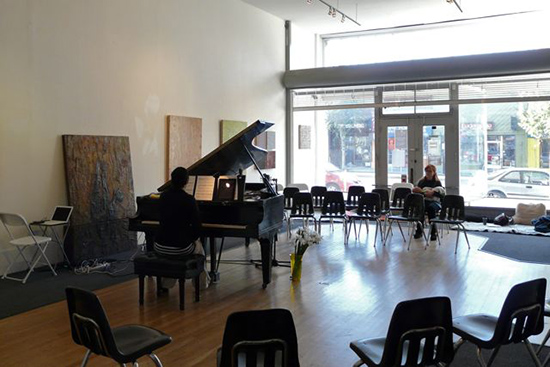 Pianists continued coming forth throughout the morning and into the early afternoon with their individual offerings: After Colombo’s energized wake-up call, Anton Vishio brought the pulse rate back down and I became aware of the breathing of the other people in the room. Regina Schaffer’s consistent and clear presentation, gently bringing out the theme throughout, made the harmonizations above ring like distant bells. Dominique Leone
seemed to speak without artifice, playing simply while neither layering compositional ideas on top of the piece nor reining himself in. 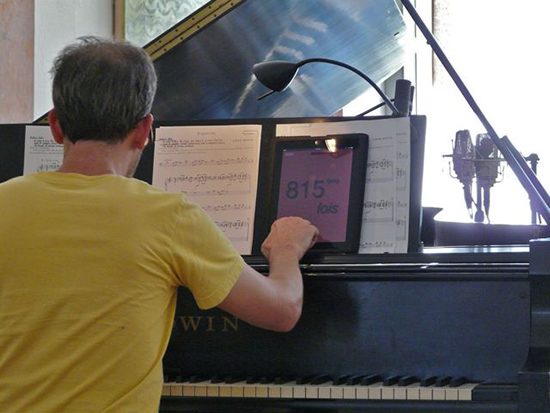 Roger Rohrbach touching the iPad to register the completion of another iteration.

By the time the final scheduled performer, Sarah Cahill, started her set, it was clear that the 20-hour concert length had been underestimated. The iPad, which was keeping track of the repetition, gradually took on a role of heightened prominence in the room as people started checking the time and doing the math. When Sarah finished at 2 p.m., the iPad counter app (written specially by the 11ers for the performance) hadn’t even reached 800, so the performers who were still around began taking turns playing short sets to keep the counter ticking.

At some point it became clear that our presence was no longer about the performance or the music itself. There wasn’t going to be a grand finale, and whatever theoretical points might be embedded in the work had already been made. Yet around 20 of us stayed until 3:35 p.m. to hear the final, 840th statement played by Patti Deuter, the organizer behind the performance. The piece ended without any flourish and we all applauded the performers’ efforts and determination. But underneath it all was the knowledge that we really had gathered there for this curious 21 1/2-hour ritual in order to pay homage to the inimitable spirit of John Cage.

If something is boring after two minutes, try it for four. If still boring, then eight. Then sixteen. Then thirty-two. Eventually one discovers that it is not boring at all. –John Cage