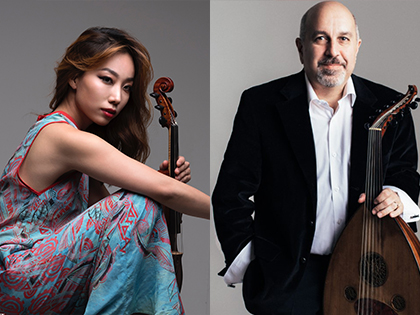 Sita Chay is a violinist, composer, and producer who won a 2017 Latin Grammy Award for Best Mariachi Album, as violinist with the world-renowned Flor de Toloache. She is the only Korean artist to have won a Latin Grammy. Sita was also nominated for a 2020 Grammy in the Best Jazz Large Ensemble category, as a member of Miho Hazama’s M Unit. She is the founder and music director of the Korean Shaman Music Ritual, SaaWee, which was hailed by international critics as a “delicate powerhouse”. Her leadership as a director of Cosmopolis Collective -Immigrant Story Telling Band was featured in New York Times and many other media.

Ara Dinkjian is an Armenian born in America whose earliest musical experience was accompanying his father Onnik Dinkjian, a renowned Armenian folk and liturgical singer. Ara learned several Western and Eastern instruments (piano, guitar, dumbeg, clarinet) and in 1980 graduated from the Hartt College of Music, earning the country’s first and only special degree in the instrument for which he has become most well-known, the oud.

This concert is accompanied by percussionist Satoshi Takeishi. Satoshi Takeishi, drummer, percussionist, and arranger is a native of Mito, Japan. While studying music at Berklee College of Music, he developed an interest in the music of South America and went on to live in Colombia for four year. While in Columbia, he worked on the group Macumbia with composer and arranger Francisco Zumaque and performed with the Bogota symphony orchestra. Upon returning to the U.S., Takeishi has continued to take an interest in diverse musical traditions from around the world.