Canadian-born composer/pianist Zosha Di Castri has been chosen as the inaugural participant in “New Voices,” a new creative partnership between the New World Symphony, the San Francisco Symphony, and music publisher Boosey & Hawkes designed to identify and nurture emerging composers from the Americas. 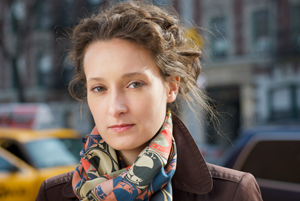 “New Voices,” a new creative partnership between the New World Symphony, the San Francisco Symphony, and music publisher Boosey & Hawkes designed to identify and nurture emerging composers from the Americas, was officially launched today. Each year, a panel of judges will choose one composer who will be guided through the process of being commissioned and then preparing a new composition for performance. The first composer selected is Zosha Di Castri, a Canadian-born composer and pianist living in New York and currently pursuing doctoral studies in composition at Columbia University. Di Castri will be commissioned to write two new works, one for a chamber ensemble and one for full orchestra. Both of her new pieces will be workshopped and premiered by the New World Symphony and then rehearsed and performed by the San Francisco Symphony in the fall of 2013. Both performances of her orchestral work will be conducted by Michael Tilson Thomas, who is artistic director of the New World Symphony and music director of the San Francisco Symphony. During the process, the composer will receive editorial guidance in the preparation of scores and parts from Boosey & Hawkes as well as learn about commission contract preparation, copyright registration, and licensing procedures, plus how to promote the music through publicity and marketing strategies. Additionally, the composer will have significant access to, and guidance from, the presenters’ artistic teams.

Zosha Di Castri (b. 1985) composes both instrumental, mixed, and purely electronic music, as well as interdisciplinary works. Di Castri’s orchestral work Alba received its world premiere at the 2011 Cabrillo Festival of Contemporary Music, commissioned in honor of Marin Alsop’s 20th anniversary there by composer John Adams and funded by a special gift from him and Deborah O’Grady. Her compositions have additionally been performed by the Edmonton Symphony Orchestra, the Internationale Ensemble Modern Akademie, l’Orchestre de la francophonie canadienne, Le Nouvel Ensemble Moderne, JACK Quartet, and the Orchestre National de Lorraine. She has also participated in residencies at the Banff Center, the New Music Session at Domaine Forget, and the National Arts Centre’s composition program. Di Castri was recently named a laureate of the 3rd International Composer’s Competition for the Hamburger Klangwerktage Festival, and is currently composer-in-residence for Ensemble Portmantô. Upcoming projects involve a performance by members of the Los Angeles Philharmonic through the Green Umbrella Series, a vocal work for the New York-based Ekmeles singers, and a commission from the Electric Noise duo for flute, piano, and electronics to be premiered at Cluster Festival 2012 (Winnipeg, Canada). Prior to moving to New York City, Di Castri lived in Paris where she pursued further musical studies after completing a bachelor’s degree in composition and piano performance at Montreal’s McGill University. Her composition teachers have included Brian Cherney, Philippe Hurel, Fabien Lévy, and Tristan Murail; she is currently studying with Fred Lerdahl.

“For a young composer, having the opportunity to work with two such forward-looking orchestras and a renowned publishing company on both a new orchestral work and a piece for chamber ensemble is practically unheard of,” notes Zosha Di Castri. “I’m particularly interested in investigating the vast sound potential of the orchestra, a medium that is relatively new for me, and am looking forward to digging into a chamber work of substantial length. It will also be very productive to be able to revise my works between the East and West Coast premieres; young composers rarely have the chance to hear their orchestral works played at all, let alone twice. Most of all, I am excited to meet the musicians, work under the baton of Michael Tilson Thomas, and learn more about the publishing world.”

To select the composers chosen for the “New Voices” initiative, a preliminary panel identifies composers and invites them to submit portfolios. The panel is made up of: Zizi Mueller, president, Boosey & Hawkes, Inc.; John Mangum, director, artistic planning, San Francisco Symphony; and Doug Merilatt, senior vice president for artistic planning and programs, New World Symphony. The final selection, however, is made by Michael Tilson Thomas and a panel of American composers and industry leaders. For the inaugural panel, Tilson Thomas was joined by composers John Adams, Steven Mackey, and Steven Stucky.