The Vilcek Prize for the Arts, this year focusing on the field of contemporary music, has been awarded to cellist Yo-Yo Ma. James Abrahart, Samuel Bazawule, and Tigran were named the winners of the three Vilcek Prizes for Creative Promise in Contemporary Music, each receiving a $35,000 cash award. 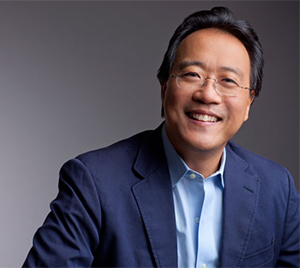 The Vilcek Foundation has named the winners of the eighth annual Vilcek Prizes, recognizing immigrant contributions to the American arts and sciences. The Vilcek Prize for the Arts, this year focusing on the field of contemporary music, has been awarded to cellist Yo-Yo Ma. The prize includes a $100,000 cash award.

Ma, born in France to Chinese parents, first established himself as a master classical cellist. He has since branched into genres as diverse as tango, bluegrass, and Chinese, Japanese, and Central Asian folk music. Ma is also the founder of the Silk Road Project, a nonprofit organization that promotes innovation and learning through the arts, and fosters collaborations between musicians and composers from around the world.

The Vilcek Foundation also announced the winners of the three Vilcek Prizes for Creative Promise in Contemporary Music, each receiving a $35,000 cash award. These prizes recognize a younger generation of foreign-born artists at earlier stages of their careers; this year, the prizes were awarded to music professionals, aged 30 or under. They are:

James Abrahart—More commonly known as JHart, Abrahart is one of the songwriters behind pop, hip-hop, and R&B superstars such as Justin Bieber, Jason Derulo, David Guetta, Flo Rida, and Trey Songz. The 24 year-old British-born songwriter co-wrote “Take You,” a song for Justin Bieber’s album Believe, which has since gone platinum. Jason Derulo performed “Undefeated,” a song he co-wrote with JHart, on the finale of American Idol, which reached an audience of 22 million viewers. JHart also wrote and featured on “Surrender,” a single for DJ Paul Oakenfold, which reached #3 on the Billboard Dance charts.
Samuel Bazawule—Originally from Ghana, Bazawule (stage name Blitz the Ambassador) infuses an African sensibility into his music as an MC, producer, and composer. He is backed by a horn section, the Embassy Ensemble, and raps fluently in English and Twi, a dialect of Ghana. The 30 year old has released two albums and one live EP, the most recent being the well-reviewed Native Sun. He has collaborated with a wide range of artists, such as Les Nubians, Chuck D, Shad, and Corneille. Blitz wrote and co-directed a short film as an accompaniment to his Native Sun album, of the same name, which was a selection of the Brooklyn ActNow Film Festival.

Tigran—The Armenian-born pianist, vocalist, and composer Tigran draws upon a wide range of influences for his music. Although trained as a classical and jazz musician, the 25 year old is just as inspired by Armenian folk music, Indian classical music, beatboxing, funk, poetry, and more. Tigran won first place at the Thelonious Monk Jazz Piano Competition, and second place at the Martial Solal International Jazz Competition, in 2006, and a French Grammy Award in 2011, among other honors. He has recorded five albums; his most widely known album, A Fable, was released in 2011, and is a solo collection of rhythmic and harmonic experimentation that is an original blend of Armenian folk music and jazz traditions.

The recipients were selected by independent juries composed of experts in the music profession, representing institutions such as Universal Music, NYU Clive Davis School of Recorded Music, XXL Magazine, and The ARChive of Contemporary Music.

The prizes will be presented at an awards ceremony at the Mandarin Oriental in New York City in April 2013. In addition to prizes in the arts, the Vilcek Foundation also awards prizes in the field of biomedical science. More information on the Vilcek Prizes is available here.
(—from the press materials)