Working with Choreographers
NewMusicBox
Written By

Over the years I have discovered that working with choreographers and dancers is challenging not only from a technical standpoint, but also that the various limitations force me into artistic directions that I would have never explored otherwise. Now that I’m working with “emerging” composers, I try to ensure that they get those same opportunities during their studies.

Many years ago, before I had even begun to compose, I had the opportunity to improvise the music for a piece on a dance recital. One of the dance faculty at Northern Illinois University needed some accompaniment reminiscent of Native American music, so I brought in a tenor recorder and a drum, and worked with her over a few weeks until I had come up with material with which she could perform. At that point I had no idea what was going on dance-wise on stage, but it was enjoyable enough and we collaborated several more times after that. These projects culminated in a series of full-length concerts where I would improvise on a wide assortment of woodwind instruments along with a percussionist colleague; nothing was written down, but everybody had come to an agreement about what the basic ideas were going to be, and for all intents and purposes the series was successful.
Fast-forward six years to when I was just finishing up my film music studies at USC and I got a call from my alma mater asking me to write a short work for chamber orchestra that would be performed as a ballet for their centennial celebration at Navy Pier. I was still a novice at composing during this time, but who would give up such an opportunity? So I wrote an elegy for a friend who had passed away suddenly a year before and sent off a MIDI recording (on cassette, if memory serves) to the choreographer (with whom I had never worked before, and had only discussed the project once). I had 30 minutes to rehearse with the orchestra before we got onstage, and about 20-30 min. to run the piece a couple of times with the dancers. It was then that I realized that the orchestra was not in a pit, but on stage behind the dancers and I would be conducting with my back to them.

I remember the rehearsal seemed to go well, but during the performance I guess I got a little emotive, because soon the faculty choreographer was gesticulating wildly just offstage attempting to speed up the tempo. I had no idea what the dancers were doing behind me and was clueless to the concept that a deviation in tempo would have massive ramifications for their performance. We all survived, but that experience got seared into my consciousness. Of course, at that point, I was planning on having a long, fruitful career as a film composer, so I doubted I’d get another chance to work in the world of dance.

Seven years after I had decided to forgo that long, fruitful career as a film composer and pursue my graduate studies in composition, I was on cloud nine—I had written a 40-minute ballet for my doctoral dissertation and had just finished a successful three-performance run of the work. I had worked several times before with my choreographer, University of Texas faculty member David Justin, and as I created the work and brought it to fruition, I realized that this was even more satisfying than film scoring. In film I was beholden to the pacing and emotions on the screen, but in dance it was like I got to write the score and the visuals were interpretations of my music. As that project concluded, Justin asked if I would consider joining him on a new dance project that he was forming. It wasn’t long before our scheming produced a rather unique concept—a hybrid ensemble called the American Repertory Ensemble that combined local Austin musicians with ballet dancers from around country. For the next two years I had many valuable opportunities to have dance made to my music and to collaborate with a top-notch choreographer. 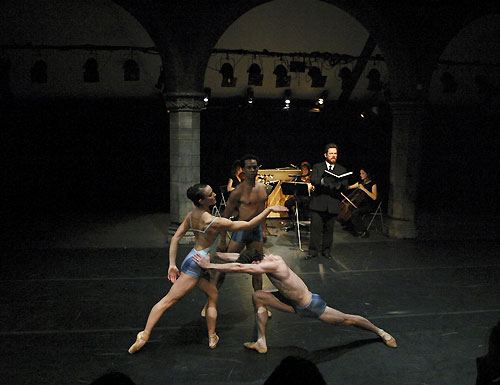 Through all of those previous opportunities, I discovered that working with choreographers and dancers was challenging not only from a technical standpoint, but also that the various limitations forced me into artistic directions that I would have never explored otherwise. Now that I’m working with “emerging” composers, I try to ensure that they get those same opportunities during their studies. Just this past weekend we presented the fourth collaborative concert between Prof. Helen Myers’s Choreography II class and my composition studio. More than one audience member mentioned to me afterwards that these choreography concerts are consistently the best student composition concerts of the year, and I’d have to agree with them. Whether it was the collaborative nature of the project, the idea of imagining one’s own music with dance, or having a longer timeline in which to compose a work, the result was a noticeably high level of composition throughout the concert. 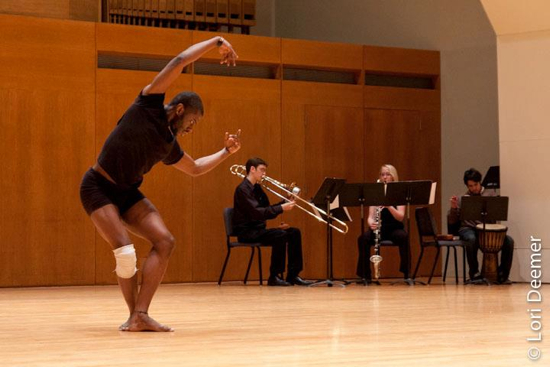 We start planning the concert several months beforehand, pairing up choreographers and composers and allowing them to choose from a collection of visual art works that Myers and I pick ahead of time. This serves to give both collaborators a non-dance and non-musical focal point to interpret. Composers have several deadlines over the course of January and February so that the choreographers can see what they’re getting into—the student choreographers, of course, had never worked with anything but pre-recorded music before, and putting them at ease is always a top priority in these projects. Six weeks out, the composers deliver their final scores and mock-ups to the choreographers, and the choreographers begin their creative process. Dance and music are finally put together in our run-through rehearsal hours before Sunday’s performance with dancers and musicians on the same stage, and while these rehearsals tend to be more than a little stressful (getting through 14 works in three hours is tricky at best), the result is a concert that really transcends what each student might have invented on their own.

I’ve met many professional composers who enjoy working with dancers and that type of collaboration seems to be one that won’t go away any time soon. Being forced to compromise and to understand one’s own work from the interpretive eyes of another artist is a process that composers—especially ones currently in school—should get a taste of, if not a seven-course meal. I hope more composition programs look toward this type of collaboration project as a valuable tool for composers to discover things about themselves as well as to prepare them for potential opportunities outside of the classroom.