Wolfgang’s Hipstamatic and Other Pictures on Exhibit in Austin

I recently saw two shows in as many nights that were presented by a couple of fantastic arts organizations in Austin: Ballet Austin and the Austin Classical Guitar Society. They both featured something old and something new, though refreshingly (and surprisingly, given that these are not new music groups) there was more of the latter in both shows.

I recently saw two shows in as many nights that were presented by a couple of fantastic arts organizations in Austin: Ballet Austin and the Austin Classical Guitar Society. They both featured something old and something new, though refreshingly (and surprisingly, given that these are not new music groups) there was more of the latter in both shows. And they utilized two of the newest and most beautiful facilities in town; the Long Center (which is home to the Austin Symphony and the Austin Lyric Opera) and the new black-box-writ-large Moody Theater in the heart of downtown. Both of these organizations warrant their own profiles focused on their performance and commissioning activities, but we’ll stick with their most recent presentations for now.

The Mozart Project. Yes, I know—wrong composer for NewMusicBox. And while half the concert was straight-up toe-shoes, the other half was not straight up in any way, shape, or form, and it is this portion we’ll discuss here. The Mozart Project is the brainchild of Ballet Austin Artistic Director Stephen Mills and features music by Graham Reynolds, DJ Spooky, and Mr. Wolfgang himself. Mills commissioned Miller and Reynolds to reimagine two of Mozart’s masterworks, Eine Kleine Nachtmusik and the Piano Concerto 12 (K. 414), which was also the featured piece in the aforementioned (and really fantastic!) toe-shoes section of the evening. 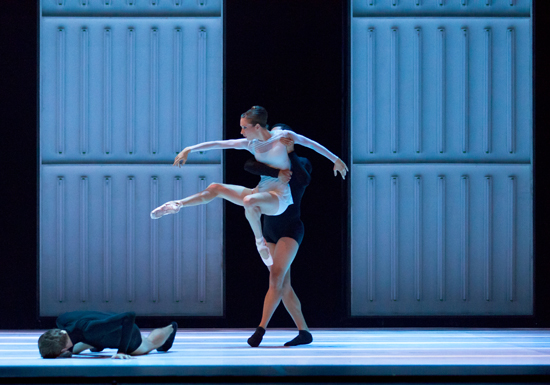 Though the Earth Gives Way – Photo by Tony Spielberg

Reynolds’s Though the Earth Gives Way featured violin and cello with real-time processing accompanied by pre-rendered percussion tracks. There were nine movements, each of which came in at around two or three minutes. Says Reynolds, “I took fragments directly out of the piano concerto score (some very small, some eight bars long) and created my music with them. In most tracks it’s very hard to hear the Mozart, but in one or two it’s a little more overt.” The piece began with a percussion line run through some delay and reverb to create a quasi-ambient bed for the main theme of the work. Most of the movements involved one part wandering line, two parts reverb/delay, and one part percussion loop (accompanied by the occasional tap on the acoustic instruments) so ultimately the piece was held together musically by texture and rhythm, and visually by the dance and the staging. The stark staging featured three large panels with fluorescent light bulbs (the long ones from high school, not the squiggly pigtail ones) placed vertically at the back of the stage. These were flanked by two similar constructions on either side, creating a large box in which the dancers performed. Dressed in black and white, the dancer’s simple but effective costumes coupled with the staging stood in contrast with the sensual choreography. The music was compelling and evocative, but often as soon as something interesting began to materialize it got lost in the echo and a new piece began. The exception was the penultimate movement, which involved running the string signals through distortion to create the impression of two metal guitarists chugging along, one of whom had clearly been spending time with his scales. It played provocatively in that we were hearing metal at the ballet, but it also seemed at times kind of odd, in that we were hearing metal at the ballet. Accompanying the distortion were quick snapshots of light from the fluorescents which caught the dancers in a variety of poses. It was very striking, and at times had a really creepy horror movie vibe to it. Very cool. 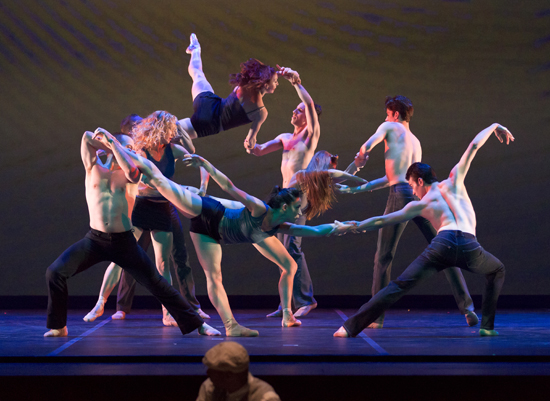 DJ Spooky/Paul Miller’s piece Echo Boom (based on Eine Kleine Nachtmusik) began with the string quartet playing a straight run through the allegro (with a bit of reverb and panning) while a video presentation involving graphics of notes and words moving across and up and down played on a screen above them. It wasn’t clear if the text was intended to be read or experienced graphically, but there was a stream of consciousness element to it that was compelling, if only because its juxtaposition with the music seemed to invite the audience to find the connection between the two. Having said that, a few people (perhaps saddened by the lack of dancing at the ballet) decided to get up and stumble over their neighbors (including yours truly) to seek out other sources of entertainment. If only those few non-believers had cooled their heels a few more minutes, they would have seen some of the most compelling dancing of the night accompanied by DJ Spooky’s remix of the Night Music. Says Miller, “Sampling and collage are what DJ culture is all about, so I wanted to figure out what would make a collage possible that looked at Mozart like a ‘record,’ but then allowed me to figure out some ways to compose around Mozart.” Here we saw, among other things, a number of landscape scenes projected behind the dancers, including several shots of Antarctica (the topic of Miller’s new book, The Book of Ice). As the piece built to a head, the sounds of the string quartet got progressively more and more obscured by the big beats and the disassembled form of EKNM broken down to such a degree that the effect was ultimately a total move from the concert hall to the club. By this point there were more than a few bobbing heads in the audience, and judging from the comments in the lobby afterward, Ballet Austin had a hit on its hands.

Matthew Hinsley, executive director of the Austin Classical Guitar Society, holds court at all ACGS events like a mild-mannered P.T. Barnum, conjuring incredible spectacle. He also serves as a connecting hub for various elements of the Austin landscape, including the business, art, education, and commerce sectors; a feat that requires a mind that can see a dozen moves ahead on the chessboard and the vision to see how the game might be changed. ACGS hosted last year’s Guitar Foundation of America’s International Festival and Competition, which was the largest, most diverse, and most successful in its history (and the first not hosted by a university) so inevitably the question became, “What’s Hinsley going to do to follow up?” The answer was “Austin Pictures,” inspired by Mussorgsky’s Pictures at an Exhibition and used as a theme for ACGS to spin its own musical variations. The show was held at the recently opened ACL (Austin City Limits) Moody Theater, which looks like what people who had never been to the original ACL theater on the University of Texas campus probably always imagined it looked like.

The show started with Austin Pictures a five-movement work commissioned from Joseph Williams II specifically for the event. The piece was performed by the Miro Quartet and a giant guitar orchestra, with Peter Bay of the Austin Symphony Orchestra at the helm. The concerto grosso of sorts began with “The Hill Country,” a lush, bright, flowing piece that started quietly and blossomed beautifully as it progressed. “Dance of the Grackles,” (What’s a grackle? Think ravens or blackbirds…) featuring the bird Austin loves to hate, was full of sharp hits and something of an old-world vibe; fun with plenty of sound from the 100 guitars on hand. “Violet Crown with Cicadas” featured long string lines and huge guitar thrumming strums that faded to nothingness. The closing movement, “Capital City Construction” (which describes the town I’ve lived in for over a decade to a “T”) was arguably the most visceral movement; its Stravinskian rhythms and powerful interplay between the orchestra and Miro brought the whole work to a thunderous conclusion. Following the intermission, the second commissioned piece of the night, Jorge Morel’s Songs and Dances, featured Miro along with the extraordinary guitarist Jorge Caballero. The three-movement work paired well with its predecessor, contrasting Austin Pictures‘ large-scale gestures with more intimate interplay among the five performers. 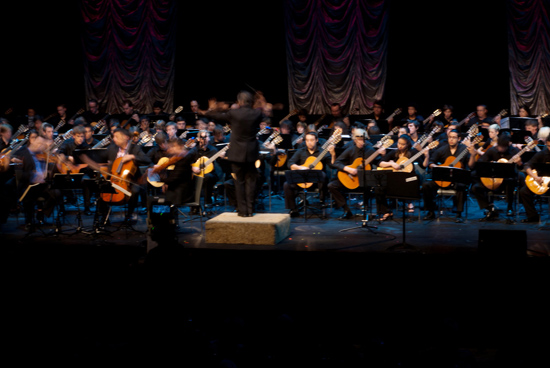 The pieces that followed, Boccherini’s Introduction and Fandango and Mussorgsky’s Pictures at an Exhibition, were wonderfully rendered, the latter a real tour-de-force with Caballero performing Kazuhito Yamashita’s infamous (and completely insane!) transcription for solo guitar.

Ballet Austin and the Austin Classical Guitar Society have both been around for some time (20+ years for ACGS and 50+ years for the ballet), but their dedication to the performance and commissioning of new music (even if it occasionally ruffles the feathers of certain patrons) has been an integral part of both organizations for years. Both could easily bring the same material back year in and year out to the same (though likely dwindling) group of willing followers, and in doing so likely find themselves in the same sinking boat so many large organizations are frantically rowing (or have rowed) into oblivion. But by challenging their audiences to try something new, by connecting with their audiences to the events, and by treating each concert as part of a larger concept/vision/mission that extends beyond just that evening or even that season, Mills and Hinsley are models not just for music selection and commissioning, but also for music presentation and audience retention, interaction, and perhaps most importantly, generation.

And that last word is key I think. Generation. One of our most significant issues is getting new people interested in checking out new music, and part of that challenge is getting them to perceive these shows not just as new versions of “Classical” music, but as something that can be so much more diverse, interesting, and communicative. The shows I saw were fun, engaging, challenging, and rewarding. What more do you want?

I want a few less grackles in the city and few more shows like these.