Why Landscape Music is More Important Than Ever

The potential for music as a catalyst for learning about nature has not yet been fully realized and may in fact depend on unconventional approaches and innovative thinking. 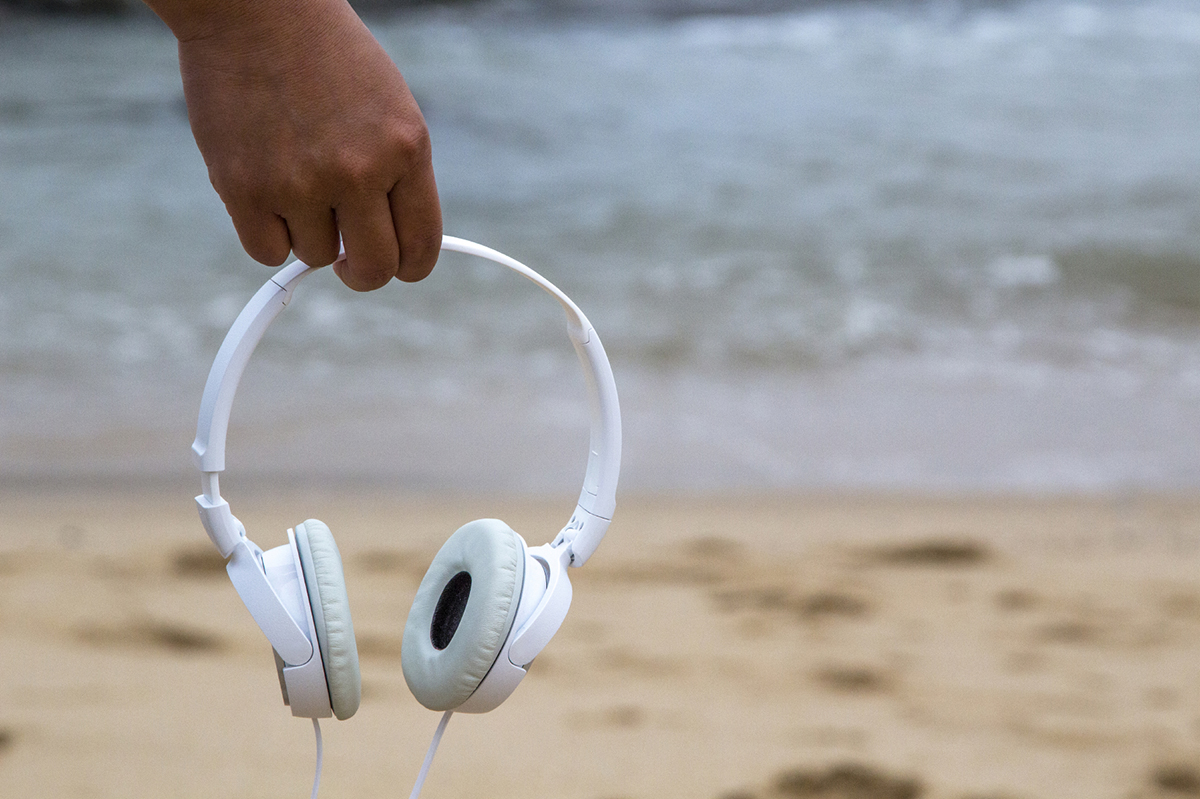 In my previous two columns, I argued for envisioning new music as a catalyst for learning and I suggested how this might be accomplished through music inspired by visual art. This week I’ll continue this theme by focusing on learning in the context of music inspired by nature, landscape, and place, which I call “Landscape Music.” The intrinsic power of music to facilitate reflection and reinterpretation of life experiences makes creating Landscape Music a compelling approach to improving and deepening our connection to nature—a goal which is more important now than ever.

While some composers may approach their music as a platform through which to advocate for specific environmental and conservation causes, others are driven to express purely aesthetic responses to nature. For composers who are passionate about having a positive impact on society’s attitudes towards the natural world, I think there is room for both approaches.

Earlier this year I founded the online publication Landscape Music—and the affiliated Landscape Music Composers Network—to investigate and promote diverse contemporary concert music that seeks to increase appreciation of nature and to provide a venue for composers’ ideas on this topic, both online and through concerts (planned for 2016). Artists featured on this website have created work ranging from a piece for contrabass flute and electronics composed around field recordings of whale song (Below, 2008, by Alex Shapiro) to an orchestral depiction of a ten-day backpacking trip in Gates of the Arctic National Park and Preserve (Gates of the Arctic, 2014, by Stephen Lias).

Similar to music inspired by visual art, creating and presenting Landscape Music may bring new music to new audiences while simultaneously leading listeners to expand their awareness of topics including conservation, ecology, the value of parks and wilderness areas, and the integral role of landscape in culture.

The Need for Landscape Music

Hubris, shortsightedness, and overall alienation from nature are leading us towards catastrophic instability and mass-scale environmental imbalance, already resulting in climate change and dwindling biodiversity. Many sense that a massive paradigm shift is necessary to reconcile the human species with our existence as a part of the larger fabric of life; to move our society towards perceiving nature as more than a resource merely to be “utilized” and used up. Justin Ralls explored this need for reconnecting and rebalancing in an article for NewMusicBox.

Artists who are concerned with the global environmental sustainability crisis are faced with the question: how can I best utilize my skills and insights as an artist to help my audience reconnect to the natural world? This may have many political implications—and I’ve argued elsewhere that investing time and energy in making music for noncommercial purposes and pursuing contemplative experiences in nature are inherently subversive actions in a materialist, capitalist society. However, the question does not inevitably imply that music must take the form of “art as activism.” John Luther Adams, who has been both a composer and an activist, emphasizes the crucial role of art in an age of crisis. Music is not less “important” than activism, nor should we use music as a platform for activism at the expense of artistic integrity. But art, like activism, can change people’s perspectives: “If my music can inspire people to listen more deeply to this miraculous world we inhabit,” Adams writes, “then I will have done what I can as a composer to help us navigate this perilous era of our own creation.”

So, why music inspired by nature? All effective music should potentially have meaning to listeners without any kind of “explanations” provided by the composer (especially hit-you-over-the-head political messaging), and music without any extra-musical connotations at all may, of course, have the very same effect that Adams describes. Even so, I think there is a significant place for music that presents extra-musical associations and reflections on nature, in the same way that there is a place for music inspired by visual art. Especially when you consider music’s potential to affect listener’s attitudes towards the world around them by expanding their emotional, spiritual, and intellectual horizons—not by convincing, but by facilitating understanding.

Learning through Music, We Connect with Nature

Our sense of connection with nature—and, more specifically, our awareness that we are animals living in a state of interconnection with, and dependence upon, the natural world—is formed through an accumulation of learning experiences (which might need to be revisited continually throughout life in order to maintain that connection). Such learning experiences might occur equally through very accessible activities, such as observing an animal or planting a garden, as they do through prolonged immersions like backpacking in the wilderness. These actions take on even greater substance and purpose through academic learning and scientific study.

While firsthand experiences of nature and scientific learning are irreplaceable, disparate “in-the-world” experiences can also become newly transformative and take on new coherence and meaning through the combination of reflection and narrative that music facilitates. Consider the ways in which memories, ideas, and emotions come together and how we “make sense” of our experiences through art—and how art can affect the way we interpret future experiences. The photographs of Ansel Adams showed new ways to see Yosemite Valley; the writings of Willa Cather gave life on the prairie an elevated yet accessible language; and the music of Charles Ives evoked universal experiences by threading together his personal observations and childhood memories of New England. Each of these artists changed how we encounter or imagine those same kinds of places today and how we understand the role of natural environments in human experience.

I wrote previously about music’s potential to impact learning. For composers, performers, and presenters who wish to improve public awareness of the natural world through music, one of the keys to accomplishing that goal may be exploring the interplay between music, emotion, memory, and learning, and how these may affect listeners’ perceptions. Ultimately, I believe that the potential for music as a catalyst for learning about nature has not yet been fully realized and may in fact depend on unconventional approaches and innovative thinking.

The Possibilities of Interactive Media

The project through which I’ve sought most directly to facilitate learning about nature was Explore John Muir’s Yosemite. This interactive installation for web and iPad app brings together my non-linear, synthesized score with original photographs and videos of Yosemite National Park and the neighboring Sequoia National Park to illustrate excerpts from the writings of influential conservationist John Muir (1838-1914).

With this project, I wanted to put a magnifying glass to Muir’s wonderful (and often dense) nature essays. I pulled out some of what I found to be the most evocative descriptions from his books—writing about the Douglas Squirrel, Muir states, “Every wind is fretted by his voice, almost every bole and branch feels the sting of his sharp feet”—and used them as starting points for building a multidisciplinary, multisensory experience.

Music, visual, and textual elements operate throughout eleven “scenes,” presented in a slideshow-like format in which a phrase of text is paired with an image and loop of music. Users advance through these slides at their own pace; they may also freely jump between slides out of order. In my “micro” film scoring technique, advancing each slide seamlessly triggers a change to the music loop—a shift in texture, instrumentation, rhythm, melody, or harmony—through which I attempted to underpin and impart greater vividness to the ideas and images being presented at that particular moment.

My goal for Explore John Muir’s Yosemite was not primarily to inform users about an influential historical figure. It was to present a “multimedia master class” on observing and contemplating the natural world through the eyes of one of history’s greatest practitioners of that art. 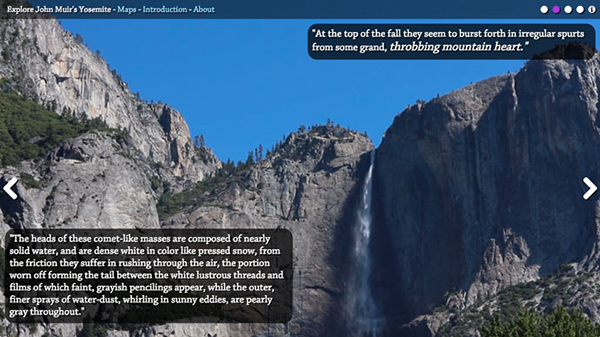 *
In composing and advocating for Landscape Music, I’ve begun encountering a fascinating constellation of aesthetic, intellectual, and political problems to explore—far beyond what I can cover here! It is my overarching hope that, by creating and presenting such work, we might direct the power of music towards stimulating listeners’ intellectual curiosity, enriching their emotional and spiritual life, and increasing their empathy with and awareness of other living beings and the infinite richness and variety of the non-human physical world.

Has music helped you feel more connected to nature? Has music ever broadened your awareness of a specific place, species of animal or plant, or some other aspect of nature? Has it helped you to interpret and observe more closely? And what, to you, are the greatest potentials and pitfalls of making music with this intention? What are the most successful examples you can recall—and how might we build on those examples moving forward?