Who Counts as an Expert?

This is an era that rewards simple explanations, yet telling the often-complex stories of how non-superstar musicians make work while making a living is more important than ever.

When you read about music industry issues in the news, does it feel like it’s connected to your life? Do you see yourself reflected or hear your concerns included? These questions were on my mind most recently last week, as rapper Jay Z was joined by a crowded stage of pop superstars to roll out the music streaming service Tidal. It’s something I think about every time a big music news story bubbles up. 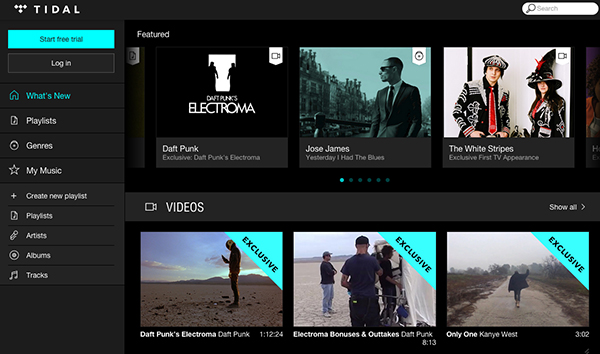 Among the general population, there seems to be a sustained level of interest in the business of making music that extends beyond our appetite to understand other industries. It’s regrettably difficult to find news coverage about the people who grow our tomatoes, sew our clothes, or assemble our smartphones, but people are still uniquely fascinated with the people who make the music they enjoy.

And yet much of the public conversation about important issues in the music business seems light in nutritional value, or narrowly focused on the concerns and actions of a handful of superstars. If you’re working in a genre or music subculture that isn’t based around mass-market assumptions, your concerns may be absent. We can all read dozens of hot-takes on the latest celebrity copyright kerfuffle, but how many of them examine whether a young composer whose work has been infringed has any meaningful recourse, if she can’t afford expensive legal representation?

One reason for this dynamic is that journalism has been going through many of the same upheavals as other creative industries. Few publications have dedicated reporters assigned to the music industry beat anymore, let alone with a labor emphasis—such topics get passed on to arts critics, or business and technology writers. I’ve only ever really worked in music, so no one would expect me to be able to explain subprime lending or email encryption. But business and technology journalists are often tasked with explaining complicated systems and revenue models, without any specialized training or background.

While some have taken on this challenge and done an admirable job, it’s not surprising that others end up making basic errors—confusing record labels with publishers, or compositions with sound recordings, for example. 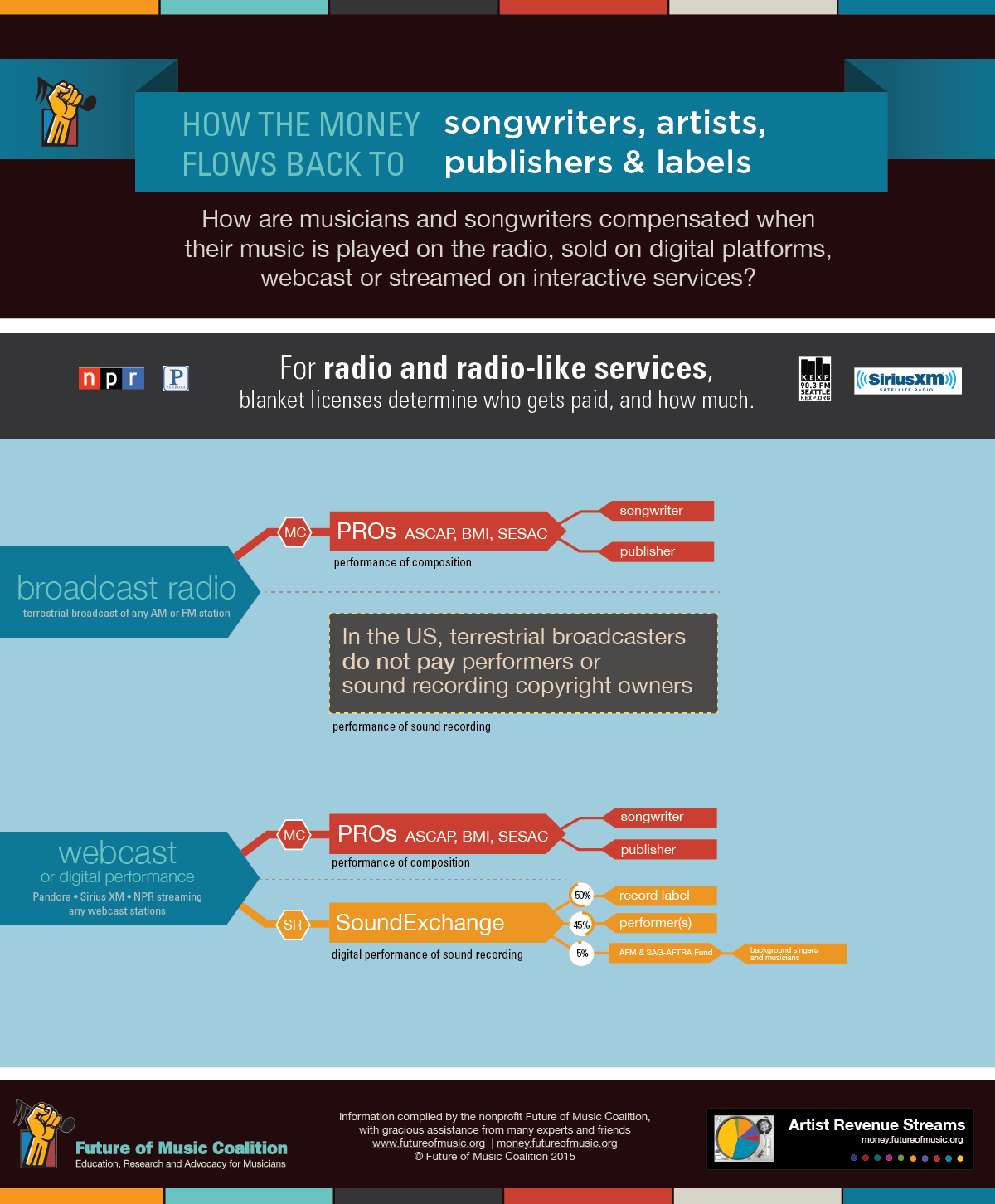 There’s also a reliance on faulty conventional wisdom; Future of Music Coalition has published research that squarely debunks common myths, like “musicians make all their money from touring,” but I could spend my entire work week trying to correct these myths every time they appear in popular media and I wouldn’t make much of a dent. Plus click-driven revenue models often incentivize writers to prioritize celebrity controversies over an examination of how non-superstar musicians (the vast majority of us) are impacted.

A parallel factor may be the trend towards “explainer journalism” sites, which “have built their core identity around explaining complicated issues or situations to a well-informed general public” as Henry Farrell, um, explains. The inherent claim to expertise in this mode of writing doesn’t exactly encourage intellectual humility or the weighing of different theories, but encourages boldly assertive claims as an exercise in self-branding and generating traffic.

This is an era that rewards simple explanations: TED Talks that prescribe neat solutions, the ability to learn “everything you need to know about X in one chart.” It’s nice when such things exist, but it’s easy to lapse into a preference for falsely totalizing narratives, and “expertise” is awarded on the basis of whether you can offer such a narrative (bonus points awarded if you can work in an affirmation of entrepreneurial progress that’s basically compatible with our prevailing neoliberal power structures).

But artists know that things are more complicated. You might even argue that making a life as a musician or composer is partly about getting comfortable with constantly navigating that complexity. We know that an approach that works for one kind of musician is not necessarily going to work for peers working in different genres, or different roles with different assumptions about scale. Strategies or business models that might work perfectly well for a chamber music ensemble may not suit a composer who doesn’t perform. We know that rather than the conventional story of an old model of the music business being replaced by a new one, there’s always been a range of many different models, and we choose the models that align with our abilities, skills, interests, and available resources.

But while adopting “it’s more complicated than that” as a default epistemological position will help you understand what’s going on, it can be challenging to find ways to tell these more complex stories. Not long ago, I was speaking to a TV journalist who wanted to know whether or not our copyright laws were “antiquated.” Now, it should be clear that this is kind of an absurd question to pose as a binary either/or. US copyright laws amount to hundreds of pages, assembled over decades, revised over and over again. I explained that while some current provisions might be due for revision, many others continue to provide important protections for creators and for the public interest. Alas, the journalist really wanted a yes-or-no answer, and when I was unable to give her one, she ended up not quoting me on that issue. It was hard to blame her—she only was allotted two and a half minutes.

Another example: the popular sci-fi novelist and tech blogger Cory Doctorow in his mostly un-recommendable new book Information Doesn’t Want To Be Free suggests an axiom for aspiring artists: “Fame won’t make you rich, but you can’t get paid without it,” a variation on the “obscurity is the real problem” adage we heard endlessly during the file-sharing battles a decade ago. This is, of course, demonstrably false: most working musicians and composers have always been obscure by the standards of mass culture. In fact, there are thousands of professional musicians who will always remain ultimately anonymous to many of the consumers who enjoy their work: touring sidemen, session players, etc. Obscurity alone isn’t so much of an issue if obscure musicians and composers are able to obtain a fair price for their obscure labors, whether from the open market, from grants and commissions, or other revenue structures. But Doctorow’s willingness to speak in such sweeping generalities about an industry he’s never worked in hasn’t been a barrier to his self-positioning as an expert on the music business. It may have worked to his advantage, actually.

This leads me to another observation about perceived expertise: working at the intersection of music, technology, and policy means reckoning with the fact that each of these three arenas carries its own ongoing battles with sexism and racism. What this means for me as a white, college-educated man is my opinions are immediately given an assumed legitimacy in many forums. I can opine about technological issues in music and policy and no one will patronizingly ask me whether I know how to code, to borrow an example from Astra Taylor and Joanne McNeil. I may not be able to oversimplify complex dynamics, but at least I look like an “expert.”

If this all sounds rather disheartening, I do see opportunities to push back. Musicians and composers are always the best experts about their lives and livelihoods, and they seem to be more and more willing to tell their stories. As busy, frazzled, and overextended as journalists and editors often are, my experience has been that most genuinely want to get it right and like hearing the thoughtful, factually grounded perspectives of artists of diverse backgrounds, including the kinds of people who will never be invited to stand on stage next to Jay Z.

The need to hear those perspectives is also a reason why sites like NewMusicBox and others that allow creative workers to speak for themselves are so fundamentally important, and I’m delighted to be contributing this month.

***
Kevin Erickson is communications and outreach manager for Future of Music Coalition, a non-profit research, advocacy, and education group based in Washington, D.C. With roots in the Pacific Northwest indie-punk tradition, his experience spans many facets of the music ecosystem, including all-ages music advocacy, alternative interdisciplinary arts spaces, community radio, and brick and mortar independent music retail management. He remains active as a musician, producer, and engineer at Swim-Two-Birds recording studio.