Being well rehearsed is not enough to guarantee a great performance, and that’s where stage presence comes in. Some people naturally have it, but it can also be taught. 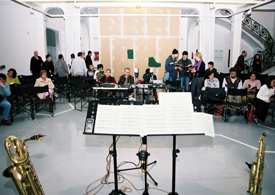 I want to raise another topic that is relevant to the good performance/bad performance discussion we’ve been having, prompted by the article “A Great Live Music Performance Requires More Than Being Rehearsed.” What makes a live performance really great? The linked article above is an interview with live performance producer Tom Jackson, in which he talks about the need for bands to develop and refine their concert performances in order to thrive. It’s focused on the rock and pop music worlds, but the concepts essentially apply to any kind of performance. A successful performance of contemporary music is subject to similar criteria, in that ideally there is a real connection between musician(s) and audience. In our musical universe, performers face some very real (literally) obstacles in this regard: music stands.

Not only do music stands create a physical barrier between musician and audience, but presumably the music stand is there because the musician needs to read from the pages it holds. If attention is focused on the music stand, there’s not much left to give directly to the audience. It can certainly be done, but it requires some seriously outrageous charisma.

Musicians who memorize the pieces they play are at a distinct advantage when it comes to performances. They have the music at their fingertips and can move that focus to creating a connection with the audience. Memorization is business as usual for eighth blackbird, and the results show. Another performer, cellist Joshua Roman, insists on memorizing as much of the music he performs as possible, because he feels constricted when blocked by a music stand. Obviously everyone can’t be expected to memorize all of the music they perform, and orchestras and choruses definitely are different beasts (however, things seem to go well when the conductor has memorized the music). It does make a difference, though. Music groups in other genres go on tour and play two-hour sets from memory. Major touring bands have likely rehearsed eight hours a day for several weeks before they set foot on a stage. Opera singers memorize their parts. Actors memorize all of their lines. Yes, all of that takes a long time, a lot of effort, and many rehearsals, but the impact is clear. Just imagine if they were carting their scripts and scores around the stage with them.

As the article states, being well rehearsed is not enough to guarantee a great performance, and that’s where stage presence comes in. Some people naturally have it, but it can also be taught. Not only would I love to be a fly on the wall watching a training session by Tom Jackson, but I would love to know what a session would be like for a classical music ensemble that does perform with music stands. How does that work? I think it could, and I believe that it is an important ingredient (possibly the number one ingredient?) in the “audience engagement” recipe that too often goes unacknowledged.